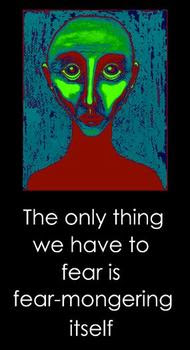 This is John Key's Chicken Little week. He's running out of horsemen of the apocalypse to terrify NZers with; he's used up Famine, Death and Plague to describe what will happen if Labour's 'dagger through the heart' Capital Gains Tax is implemented and now he's left with War to frighten us over the supposed flood gates of refugees  who are going to swamp us from Sri Lanka.

As Amnesty International points out, he is scaremongering about the refugees. What's going on here is that ACT have outdone themselves with their race baiting this week, and National needs to throw their redneck rump constituents a bit of raw meat to keep the party faith and no one is easier to blame than refugees fleeing war zones. He's competing for dog whistles.

As for the Capital Gains Tax, here's a list of people who now all agree with Labour…

And here's the list of people who agree with John Key...

We need to stop borrowing and we need to stop cutting public services, the way we do that is expand the tax take by taxing those currently rich enough to hide their wealth.

Just because you have a list of people who agree with Labours CGT doesnt make it a good idea!

Tell me possum, if three doctors all agree on a diagnosis and prescribe an appropriate treatement, do you still tell them "it's not a good idea"?

Because from where I'm standing, it seems that those who agree with a Capital Gains Tax are a fairly broad representation of New Zealand society and commerce.

Of course, maybe the reason that National doesn't like the proposed CGT is this: http://www.stuff.co.nz/dominion-post/news/politics/5019526/How-many-properties-do-MPs-need

Capital gains tax, Mana Party, what else is Key scaremongering?

Oh yeah, refugees are scarey as well. South African's fleeing to NZ from Nelson Mandala are most welcome, but poor brown people in leaky boats escaping persecution are frightening.

gee bomber,dunno why you left out blade running with a big holey bucket tariana turia.. i have seen things you people would not believe.capital gains attax ships on fire off the shoulder of the IRD.i watched cheap rentals glitter in the dark near Cook's garden gate.all these houses will be lost in tax,like levies in the rain.time to die....franky says