Greece and the victory of venal capitalism over democracy I've pointed out that this great recession is a crises of capitalism like the great depression and has the potential to be as bad if not worse.

The latest on the PIGS doesn't suggest things are getting better at all and are in fact building to the next crises. Sovereign debt is about to become the next sub prime mortgage as the global stimulus cash is all finished up and we are about to finally go cold turkey.

And what of the American Corporate greed that got us into this because of the neoliberal deregulation global rules of economics that are enforced upon the rest of the planet?

Well, they are quietly paying...

All too quietly, Wall Street firms are being sued for their many transgressions. A study by Gary Null found that over $430 billion has been paid to victimized parties by Wall Street firms in over 1500 cases.
Some examples:
* Bank of America has spent $14.9 billion to settle 15 cases alleging various charges such as securities violations and mismanagement;

* Citigroup has spent over $13.9 billion to settle 12 cases alleging various charges including abusive lending practices and involvement in fraudulent activities;

* Morgan Stanley has spent over $5 billion to settle 11 cases involving various allegations including failure to disclose material information to customers;

* Wachovia has spent over $9.5 billion to resolve allegations including misleading investors and conflicts of interest;

UBS has spent $19.5 billion to settle 6 cases with various charges including misleading investors.

As fulfilling as it is to watch these corporate maggots bleed, they are still the cause for the second impending collapse of the W recession, look how the corporate elite got away with setting the Greeks up...

Goldman Helped Greece Hide Catastrophic Debt
(Newser) – Greece's budget problems were allowed to grow to their current monstrous size with the help of a Goldman Sachs deal worthy of an Oscar for creative accounting. Greek government officials—no strangers to number-juggling themselves—used the US bank to concoct a derivatives deal that allowed the country to circumvent EU rules requiring member nations not to run deficits exceeding 3% of GDP, Der Speigel reports. The deal, agreed in early 2002, circumvented EU rules with a credit swap in which government-issued bonds in dollars and yen were traded for debt in euros. Such transactions don't need to be reported to EU authorities. The Goldman-Greece deal exploited this loophole by inventing a fictional exchange rate, allowing Greece to borrow billions more and mask the true size of its debt. Greece's deficit problem will become even greater when the Goldman bonds mature over the next 10 to 15 years. Greece's exploding debt is now threatening to bring down the euro.

Taking their weapons of mass financial destruction but instead of domestic consumption for the sub-prime mortgage market, Goldman Sachs on sold it to a country. Will the sovereign debt collapse spark off the next massive downward spiral in the W recession? Is Greece a moral hazard too far for the EU with Ireland, Portugaul and Spain knocking on the door? With China tapping the breaks twice this year already on banking loan restrictions looks like those pronouncements last year that the recession was over are more akin to Hoover's "Prosperity is just around the corner" quote.

Goldman Sachs Group Inc's role in hiding billions of dollars worth of Greek debt, all the while betting that the Greek economy would collapse is like buying fire insurance for a house, leaving the gas on and inviting the owners around for a cigar evening.

The financialization of the global economy has created corporate gangsters and where better to symbolically crucify democratic states than in the home of democracy? 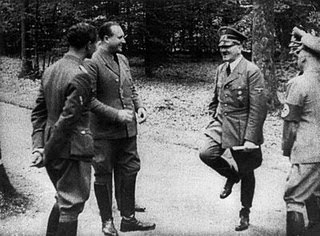 Like a spoilt Adolf Hitler skipping outside the train used to sign the Treaty of Versailles, the Goldman Sachs Group Inc hit job on the birthplace of democracy must be as satisfying for those Corporate Gangsters as those wealthy Republicans refusing tax increases as America's debt ceiling draws closer.

Over 70 years ago in World War 2, Communism sided with Democracy to overthrow Capitalists and Fascists. The Capitalists swapped sides when they realized Fascists don't follow the rule of law and sided with the Democrats, moving on after defeating Fascism to defeat Communism and now Capitalism challenges Democracy, killing Greece will be more than a symbolic victory.

And yet the media still portray the big money people as idols, to be worshipped? Don't they read history and the problems caused by the money market over the years? Why do the people of Greece, those who actually do the work, have to suffer because of this? The same applies to the salary and wage earners in NZ, who bear the burden of current government cut backs and redistribution of money to those who don't need it.

"I believe that banking institutions are more dangerous to our liberties than standing armies. If the American people ever allow private banks to control the issue of their currency, first by inflation, then by deflation, the banks and corporations that will grow up around the banks will deprive the people of all property until their children wake-up homeless on the continent their fathers conquered." -- Thomas Jefferson