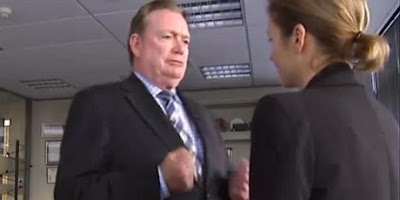 Here is why Alasdair Thompson needs to be sacked as a moment to restore credibility for the Employer's and Manufacturers Association.

Because it's all about context.

IF Alasdair had been on Tony Vietch's sports show joking around like a chauvinist bloke arsehole, Alasdair could be tolerated. But he wasn't.

In context, he was making his comments ON THE RECORD for the amendment to the pay equity legislation. It's not making a speech at a fucking stag party, he's speaking on the record to Catherine Delahunty's Bill that has been drawn on pay equity and he justifies in the interview that women are paid less because of their monthly sickness and need to have children???

How much more in context do we need here? This is ON the record, and Alasdair then follows that extraordinary statement up by bullying a female journalist who had the audacity to challenge his sexist misogynist dribble.

No wonder Women get so less if the guy advising the Boss thinks this bullshit.

For the love of God, the only way Alasdair could trump his current status as grand cyclops of Chauvinist Pigs is if he pulled his penis out of his pants live on TV and said, 'Oi love, do me a favour and have a suck on this eh'?

That's how bad a position he is in. He has no credibility on any employment position now he has stated such unbelievable sexism.

A) So pig arrogant that he can't see how this is coming across and as such has become toxic meaning the EMA must cut him lose for their own reputation.

Pointing out an intrinsic element of a person as justification for less, is not a justification, it is a statement of bigotry. With bosses like Alasdair, we know now why women are paid 12% less.

Thanks for the add on LinkedIn Tim, much appreciated.

Meanwhile, glad to see that fans of "free" markets are proving themselves jaw droppingly stupid, as usual.

To Mihi and all the other period people earning 12% than us dickwads - our apologies - please believe - not all of us talk much less understand dumbass stuff like that.

Alasdair Thompson has made an extraordinary claim, that demands extraordinary evidence to justify. If he can't produce said evidence, he needs to go. Immediately.
If what he says in effect is true, i.e. that women genuinely are less productive in the workplace than their male peers (which in my experience is total BS), then I guess it should be alright to say so. I believe in facts and reality, not fantasy and conjecture.