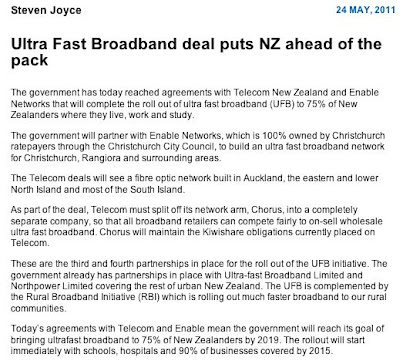 And Telecom - that hated, bureaucratic, inert, monstrosity says thanks Joycie. And they promise that this time for real they will constitute the network ('Chorus') subsidiary as separate... truly:

As part of the deal, Telecom must split off its network arm, Chorus, into a completely separate company, so that all broadband retailers can compete fairly to on-sell wholesale ultra fast broadband. Chorus will maintain the Kiwishare obligations currently placed on Telecom.

And that's just Telecom's involvement. I don't trust Telecom based on all their previous behaviour. 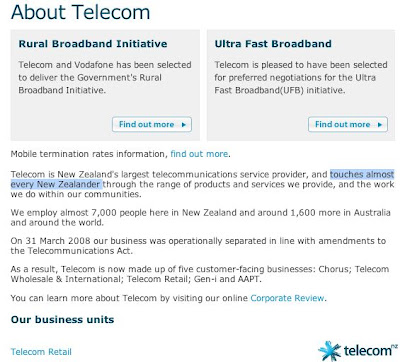 Yeah - 'touches' in a bad way. They are all about games and lawyers, dragging everything out to hold on to legacy advantages because they know they don't have the culture as an organisation that is capable of competing, and so they continue to trick and rip off their own customers. The split companies scenario is an old ruse - one competitive retailer, the other a network operator supposedly not preferring its retail arm. It never works that way - and the fact Telecom haven't sold one of the arms off tells us the value is still in the ability to have both and (mis)use that position.

It's good the government are spending a bit of money on it, but it's not so good the way it's gone to Telecom or how they will deliver it. There are economic and social benefits and conveniences from the investment, but there are opportunity losses and market competition issues too.

As for Telecom's UFB site - that's a timely example of the typical cuntiness of anything connected with Telecom - an annoying pop-up box you have to clear before you even start. That's pure Telecom - Telecom Classic: treating you like an idiot, pissing you off and dicking you around. 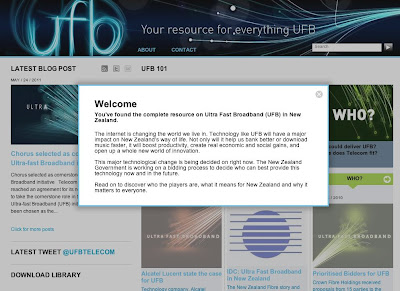 Like the automated call centre games their customers have to endure. Is that what navigating through this site is going to be like? No thanks. I'm bailing now. As with everything Telecom - let's just save ourselves the disappointment.

As a boost to the economy - to productivity and to the exchange of goods and services - how much can broadband be? Not much more than at present where those who need the speed can get it - at a price. The idea that telecommuting and so on will be commonplace and an employee will normally go through the week without ever being physically present where the management and the other staff are located seems unrealistic. However as a boost to personal communications and the mass media, esp. with internet streamed hi-res TV around the corner - that's where the real gains will be.

Telecom and the other consortia will use the money to put in fibre, although the Minister is not clear whether it will be to-the-door or to-the-cabinet, but does mention pricing:

Wholesale household prices will start at $40 or less per month for an entry level product and $60 per month for the 100 Megabit product. There are no connection charges for households.

No connection charges? So it's not to-the-door(or gate) then is it? We'll still have have copper to the door. And all the retailers still have to use Telecom (as 'Chorus') and so it will never be as competitive as it could be, the prices will always be higher because we will be paying Telecom's ('Chorus'') margins on everything. We would be better served by opening it up in a planned way to everyone prepared to invest in their own line infrastructure. The way the government has gone about this tender prevents that competition from happening. And I mean competition in the network market - not just the retail market relying on a single network. What I am saying is that Telecom is so bad and the copper lines they have so old that it would be a viable proposition - even with a 'Kiwishare'-type obligation, or without subsidy - for other companies to set up their own local lines networks. They can only do so if central and local government can contemplate it. I don't think they ever have, I think they have assumed they are 'natural monopolies' and are stuck inside that box.

It is a mistake to continue a plan to retain such monopolies. The paradigm of 'natural monopolies' on lines is conditional on the councils not allowing other lines on the poles and the expense of laying underground by oneself being prohibitive. Those are conditions that central and local government have a large say over.

It is the creation of a multi-use conduit space in suburban and urban areas that would solve this issue permanently. With the ability to rethread the several pipes of the conduit with cables or wires or tubes (or whatever can fit through it) would mean both the end to digging up the streets every few years and the undergrounding of the overhead wires. The problem is when I tell the Auckland City Council this - and the Deputy Mayor of the new Auckland Council - that Auckland needs a cable commissioner to co-ordinate the undergrounding of the overhead lines with the footpath renewal no-one can be bothered doing anything. I have posted on this issue many times over the years and now we are at the stage where the wasted opportunities and massive inefficiencies will now be realised.

The Councillors seem to be under the illusion that these things are co-ordinated and the footpaths and the undergrounding is taking place - they are not. It's a mess. Wretched overhead wires and telegraph poles left intact while below it the brand new concrete footpath will be there for at least 40 years, meaning they can't have planned for anything to be undergrounded for 40 years! And now Telecom is about to either riddle the overhead lines with added visual nuisance (which no Council would let them do) or dig up or trench every street in Auckland, without any co-ordination - I will bet - at all. Through all the brand new concrete - rip it all up again. Totally avoidable.

Why is there a reluctance? It keeps their monopolies intact because the Councils won't let any more wires onto the overhead lines and so any competitor - at a great deal more expense than if they had to share the costs with the other relevant networks - must underground their network by themselves. This lack of competition and the nuisance and waste of unco-ordinated works at this scale amounts to economic sabotage.

When I quiz the Councillors on this they just shrug and say it's not their problem. It's quite insulting to be told that the one literally over-arching visual pollution problem that is worse than tagging is none of their business. They say it is Telecom and Vector's problem. I say Telecom and Vector are the ones with the most incentive to keep it like it is and to keep their communications and power reticulation monopolies in the process. It costs them money to underground - I think Vector only has one staff member to liase - and the Council doesn't make them, so they don't. And that suits them no end, but it doesn't suit the public and the people who live in affected neighbourhoods. When I suggest a bylaw to force then to underground where the footpath is being renewed they don't care. When I say the overhead lines should be rated to pressure them into putting it underground they don't care. They really don't think it's any issue at all. I can't understand their toleration of ugliness and their inability to comprehend what ought to be obvious. A council-owned organisation could build most of the conduit via the footpath contractors and lease out the pipes. It ought to be possible to put water and gas lines in the pipes as well as electricity, copper and fibre. There must be more pipes in the conduit than networks currently operating in order to ensure additional services can enter later without any surface disruption. This project will take many years - perhaps more than the demand for broadband will allow - so some trenching may have to be done outside of the footpath renewal, but this must also be aligned so that it fits in when the renewal reaches that area. This would be the most desirable method for Auckland and any urban area to get the most efficiency out of private/public infrastructure spend.

As for the rural roll-out: why? It reads like a $285m gift from the government to Telecom and Vodafone esp. to pay for their mobile businesses. Why the massive subsidy specific to the back blocks? And why are they being done first!? Will Joe Bloggs, Farmer of Waikakamukau get that much out of his broadband? Can't he log into Fonterra on dial-up? How many "creatives" will decamp to the wilderness and why should the taxpayers fund their 100Mbps porn? And why do primary schools - tiny rural primary schools and the like need broadband and why are 48 getting digital microwave radio connections? Where are they FFS - in the Ross Dependency? What happened to books? It's a nice-to-have, it's not really a priority is it? But too late - that money has already been spent.

The smallest itch has been scratched first while the biggest looks set to be a scabbing open wound.