RNZ reporting there are four people running against Hone:

The by-election to be held on 25 June was caused by the resignation of MP Hone Harawira.

The frontrunners are considered to be Mr Harawira, the Maori Party's candidate Solomon Tipene and Labour's Kelvin Davis.

Maori Party leaders and MPs arrived in Northland on Tuesday to launch their campaign for the seat, by erecting billboards in Whangarei.

Solomon Tipene, the King of Tonga look alike - right down to the befuddlement - is doing the kamikaze act for the Maori Party. The President will be happy that 64 year old Tipene will carry the flag for the party that he said was not interested in the votes of the young. 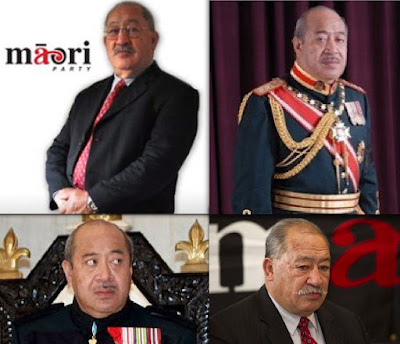 Kelvin Davis is a personable and sincere Labour candidate, but he has no killer instinct - he is a whimp compared to Hone. However Davis is why this will not be a total walk-over for him and Labour's machine and deploying of the parliamentary-paid MPs and staff will put a dent in the massive majority most expect.

I think I gave Hone about $1.20 as far as odds goes and I'll stick to that - after the Native Affairs poll comes out and the debate on 13 June it may change, but right now Hone Harawira has to be the hot favourite. He has been leading the agenda on policy as well as demonstrating leadership by putting his political arse back on the line so the momentum will be with him for some time yet.

The latest polls have the Mana Party registering for the first time, the next polls will start to tell how much of that is from the Maori Party. The choice of Solomon Tipene will reflect in the polls as the focus will be on his performance for the duration of the by-election campaign. Oh dear.

Sometimes in politics it is best to say nothing, Like Phil Goff trying to earn points with a certain type of voter by saying he would not work with Hone, when he ultimately will if it means denying the tories.

And Tim pointing out that the Maori Party has a less than stellar TTT candidate. Leave the guy to flounder man, UNTIL or if, he plays up, then he is fair game.

Tiger Mountain: He has played up, he refuses to do media interviews! What sort of candidate does that? He's old and fumbling and out of his depth - and that is the person that the leadership and what is left of the Maori Party up North has chosen to represent the Maori Party. So be it.

Hey John Key, It’s time your Government grew up over New Zealand and gave in to the Green and Mana Parties. It is like a

war now to save our land from The New World Order, to be run in NZ by the traitors National Labour and Act, lead around virtually, by a money

manipulator – John Key, hiding behind a big cheesy greedy grin, which does not fool Mana and the Green Parties for one moment

Mana and the Greens join in saying loudly:-

“Stop selling off our resources, to stay in power, John Key!”

Our Mana Party and our Green Party marching together against Imperialism and theft of our resources http://www.michaelparenti.org/Imperialism101.html
Mother Nature is so happy!

Real People of the Land fighting side by side, literally for life and our children’s future…

Our politics june 23, 2011, today, is according to our illustrious Big Brother media just going to be a quick “OOH gee Hone Harawira said the word ‘BULLSHIT’ and that’s all we got of the ‘debate’.

Then straight in to long long convoluted discussion about some tough guy called Sonny Bill somebody or other, saying something or other about a game that should be called thugby
cos of all the injuries it causes and which have long reporting time all of their own.

Then more long debate about ‘Sharks’ versus ‘Crusaders’ worried about who gets a football to kick or carry quickly around and fall down and um ‘score’.
Then woman having a period and upsetting one of…aww fuck it forget it.

I am pissed off!

Anyone else pissed off”
Anyone?
Later tonight Big Brother media will take us to its own TV shows where words like mother f…er are screamed out.

And Hone said he strongly hates this same putdown of women and our mothers that gaybo media illustrates constantly.
He only vents ‘bullshit’ as an expletive,

Suck it down bullshit media.

I don’t believe that our media is ever fair to the voters of Aotearoa, so that we are given enough fair and balanced information, to choose worthy folk for our parliamentary system..

So Democracy collapses right there.
Today we see the Australian cartoonist in The NZ Herald do yet another anti Hone Harawira cartoon. He implied a nonsense as usual.

We are therefore in an Orwellian phoney world, with imported foreigners who can scarcely be going to love Aotearoa as we do, who are born here, dominating the discourse
Act Labour and National will export our jobs and import foreign cops to bully us if we continue to follow the American model, that is sold to us by a debauched and extremely violent Television, imported from Hollywood and Madison Avenue., our Big Brother,

Is Maori TV our only hope?
They gave Judy Bailey a job!
Judy took 800,000 dollars to read the news, from a prompt screen, on pakeha TV and by her composed silence, seemed to OK all the obesity junk food and violent TV, showing kids how to be criminals, that had just started.

She smiled sweetly and kept taking the money!
The Mother of the Nation?
Give us a break. A media trick, one of hundreds.
Hush money. Judy and when you did a photo …
opp in Africa cuddling a little african child , while sitting in a waka, well I spewed…

Good luck Hone.
Soon you will get much more chance to take the fight against the nazis, who are selling NZ off, forward – and we get our lovely Aotearoa sane again – back again!

I am very proud to offer my help to you and f the media!