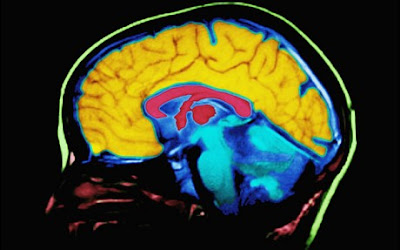 Political views 'hard-wired' into your brain
Tories may be born not made, claims a study that suggests people with right wing views have a larger area of the brain associated with fear.

Scientists have found that people with conservative views have brains with larger amygdalas, almond shaped areas in the centre of the brain often associated with anxiety and emotions.

On the otherhand, they have a smaller anterior cingulate, an area at the front of the brain associated with courage and looking on the bright side of life.

The "exciting" correlation was found by scientists at University College London who scanned the brains of two members of parliament and a number of students.

They found that the size of the two areas of the brain directly related to the political views of the volunteers.

So the right wing way of thinking is more closley connected to fear with less courage? No surprises there, take a peek at the venom right wing bloggers Cactus Kate (she who broke the bloggers code of not rectifying a comment once pointed out as wrong - can't WAIT to judge her in the blogger awards) or the right wing hate speech site 'No Minister' - plenty of fear with no courage there.

One has to simply look at the National Party and ACT caucus for further proof of the right wings genetic mix of fightened cowardice and it helps explain their world view of selfishness as a virtue.

We should pity right wingers becuase they can't help it.

Bullshit. This is just another tilt at genetic branding.
Labour and Cons are hardly left and right.
Also the sciontists say clearly that:
"It is very surprising because it does suggest there is something about political attitude that is encoded in our brain structure through our experience or that there is something in our brain structure that determines or results in political attitude."

Has to be a pisstake or desperate bid for shrinking research funds.

You sound fearful without much courage Dave, did you vote for John Key?

What the fuck are you rabbling on about now Bomber?

Words cannot express how little I fear you.

I published word for word every comment you made on the post and even linked to your distorted side of the story. I didn't censor any of your view on it. The simple fact is I wasn't wrong so will not apologise or back down from anything.

If you wish to keep panty-wasting about it then be my guest.

Kate you lied through your fucking teeth, perhaps the air con in those swanky hotels is turned up too high and you don't seem to have any connection to the real world? You attributed Tims comments to me - you were then told you were wrong but you didn't back down at all - you broke the blogger code, if you are told you are wrong about a claim you have an obligation to back down, you didn't.

Idiot Savant was marked down because he didn't allow comments as that was considered essential to blogging, as I shall mark you down when judging you in the next blogging award. No need to fear Kate, just telling you that when you lie there are ramifications, it's as simple as that.

Mac Dr I have to feel sympathy rather than anger at you as you are genetically made to be fearful with little courage, it's not your fault.

Nothing to do with genetics, BTW. Brains develop based on how they are used, particularly in younger years. Face more fear on a day-to-day basis and your fear centres grow larger and more active.

So it's more scientifically accurate to say conservatives are the adult form of frightened children. How they apply the abundance of fear routines that result in adulthood should be seen as conservatism, rather than fear.

Unwillingness to change, basically, they've found a way of looking at life that stops the feeling of fear and are not willing to chance going another way. Not afraid, just conservative.

Plus, it's only a trend, which means nothing about any individuals not specifically tested.