Redneck screwing of prisoners for the sheer joy of screwing prisoners 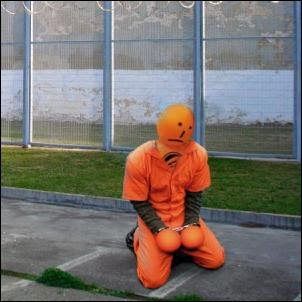 Rednecks were more aroused than normal last week, as the Government misuse urgency again to ram through all the dirty politics they want to set up under the mainstream medias news radar (although let's be honest, rednecks could hold a press conference with Paul Henry explaining what they are doing and the mainstream media would still agree with what is being done so why they bother with misusing urgency seems to be just the way rednecks prefer to damage democracy).

This filthy little redneck national party maggot, Paul Quinn has his 'fuck prisoners for the sheer joy of fucking prisoners' law being rammed through at the moment, the law seeks to eliminate those sentenced to less than 3 years their right to vote. This utterly spiteful law is the final nail in the coffin to alienate prisoners even further from the franchise of democracy and serves no other master than hate.

That awful redneck Kerre Woodham kneejerked in her hideous column in the Herald on Sunday that even though Paul Quinn's banning of prisoners would not reduce crime, acknowledging that the law was simply spite, but she didn't care. Woodham sums up the intellectual might of the rednecks, sure they know their hate won't make the situation better, but they just want to be angry.

As the ever brilliant Gordon Campbell points out in his work on denying Prisoners the right to vote...

The main argument against prisoners being allowed to vote is that their crime has cancelled out their right to be considered part of society. That argument, Sauve points out, lacks any value as a deterrent. “When people are committing a crime, most people are not thinking about the rights that they’re going to lose. They’re thinking about how they can avoid getting caught. If people already feel they don’t fit into society and that they’re rebelling against society – well, the better way of trying to encourage them to take part in society again is to encourage them actively, to vote – and to have a say within society.’

‘ The one thing I noticed after we got the right to vote was when every election came about, guys in the dining hall or the ranges were actually talking about politics. And not necessarily talking about the beefs they were in, or stuff like that.” Not everyone in prison does exercise their vote, he adds, just as not everyone does in the community at large – but in his experience, prisoners do talk about the elections.

Even so, getting sent to prison means that people lose their right to a whole range of rights and freedoms. Why should the right to vote be held up as something sacrosanct? “You go to prison for a punishment,” Sauve replies. “ That is your punishment : the loss of freedom of movement. It really is severe. When you’re locked in your cell at night and you are all alone, that’s when you realize you’re really doing time. That’s also when you think about how you want to fit back into the community. I wanted to be able to fit back in. I wanted to show that I could make it, that I could be something other than my crime…”

By contrast, the removal of the right to vote is – he agrees – a way of saying to the prisoner that he or she is literally, a non-person. Given that most prisoners will one day be returning to society, how could it possibly be in society’s self interest to promote such an attitude? “I don’t think it is,” Sauve replies. “ I know that a lot of people want revenge. They don’t necessarily want justice. ‘

So very ugly and so very petty.

yup i agree with that statement 100%, thats written by a person who actually knows what its like, unlike the sst