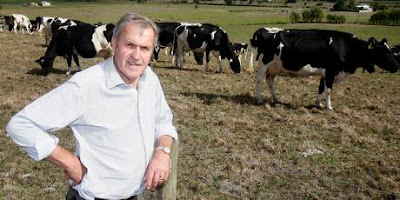 MP Carter makes quick u-turn
A farming company part-owned by a Cabinet minister was able to give him a briefing about how the Government could protect its lucrative trade with Muslim countries by banning Jewish slaughtering.

The Jewish community researched Carter and noticed his business connections and exposed them this week just before legal action to allow kosher killings, why Carter couldn't have just cited the actual welfare of the chickens as the reason to ban kosher killings and not his private business dealings is eye rolling and justifies the u-turn.

If Muslims are forced to stun their animals before they kill them, why can't the same restrictions apply to the Jewish community? Why is the welfare of the animal suddenly meaningless and David Carter's private business dealings a factor in legislation?

Is it too much to ask the Minister for vast personal wealth through Agriculture to make decisions based on the actual welfare of animals rather than his sprawling agricultural empire?

It would be nice were it for the welfare of animals. Funny the Jewish community doesn't seem to realise the traditional kosher method came about from it being the most humane way to kill animals a few thousand years ago. Now it's cruel and unjustified. I like to note the Muslim community has accepted this.

It would be great to one day live in a country where our laws were not picked and chosen by MPs having these bits on the side causing them financial/social bias on important issues!

Shhh Bomber. We are the least corrupt country in the world, don't you know.