Mercy by the pound - Justice without the annoying cost 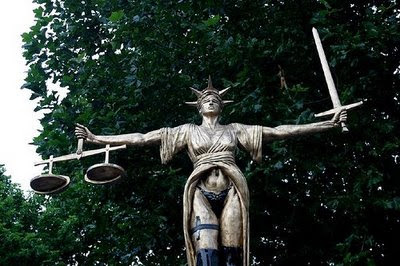 Simon Powers abattoir conveyer belt of cheap pet-food grade judicial practice is coming to a courtroom near you!

The largest dismantling of judicial protections under the banner of 'efficient streamlining' began this week with closet sadist Simon Power proposing the abolition of jury trials, the creation of absentee trials, allowing Jury's to shrink and video linked desensitization. For crimes punishable by up to 3 years jail time there will be no Jury, just a Judge. Perhaps one of those Judges who were described in a 2009 report as being idiosyncratic, arrogant, inflexible and not up to the job intellectually.

Watch the imprisonment rates skyrocket as hang em old boy judges do a bootin-scootin-two-step-get-off-my-land-boy dance routine that will have the Sensible Sentencing Trust writing them love sonnets. All I want to know is when Judges get to have vacations at Private prison conferences in Fiji, because only then we'll officially know evil has won.

How Simon Power has managed to piss on the Magna Carta and gut you of judicial protections without a whimper is testament to a media that spends more time on the life and death of a psychic octopus than that boring old holding the powerful to account chestnut.

If you're not concerned, you haven't been paying attention.

A good bill with great changes. Now there'll be less oppourtinuty for lawyers to wtought the system and defendants to delay guilty pleas for no reason; tying up thousands of hours of police and court time. About time.

until you fall foul of "the law", anon........and with the erosion of more of the checks, balances and rights, there is every chance that Mr and Mrs Joe average will come unstuck over some bullshit "crime".
But then, the "anons" of this world seem to consider themselves a cut above "average".........

<(((Echoes)))> Bomber & JonL.. and @ anon after spending an hour witnessing a v poor pompous windbag imitation of Rumpole era judge in Auckland CBD a few weeks ago... 'Laws are only words words written on paper, words that change on society's whim and are interpreted differently daily by politicians, lawyers, judges, and policemen. Anyone who believes that all laws should always be obeyed would have made a fine slave catcher. Anyone who believes that all laws are applied equally, despite race, religion, or economic status, is a fool."
-John J. Miller..... (or an ass). If the tag fits?

seeing we are quoting people, this sums it up for me.
"You're not to be so blind with patriotism that you can't face reality. Wrong is wrong, no matter who does it or says it."
— Malcolm X

Simon Power is an idiot. end of story.