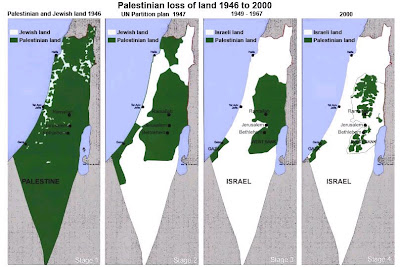 The report showed that Israel has begun building at least 544 apartments since a 10-month halt on new housing starts in the settlements expired late last month.

So this is what cultural genocide actually looks like, the constant encroachment by Zionist fanatics onto Palestinian land that is not there's to build upon has been allowed to occur without America stopping it. If Obama was real about peace in the Middle East he would threaten Israel with shutting off the military aid they get that enables them to keep the Gaza and West Bank as the largest open aired prisons on the face of the planet, but Obama has failed to threaten Israel and so their brutal occupation and group punishment tactics continue.

Israel is the new Anti-apartheid South Africa, and as such should be shunned diplomatically with the same distaste until their citizens are made aware how unacceptable their land theft and occupation are to the rest of the planet.

And what is our Government doing? Why they allow these occupying passport stealers to set up an embassy here, not surprising when you consider that Murray McCully just set up a Friendly Society with Indonesia in the same week Indonesian forces were caught on tape torturing two priests to death. 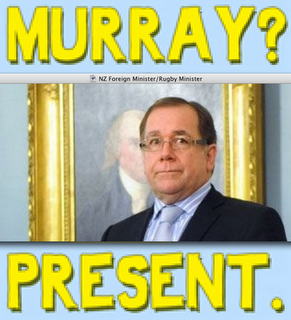 Hmmm America gives $3 Billion per annum to Israel to fund this illegal occupation no wonder they continue at such speed.

Israel do not and have never wanted a lasting peace with their neighbours (despite what they say).

America's continued aid and empty rhetoric about the 'Peace Process' is just that - empty. The aid they give to Israel, Egypt and a host of other states in the middle East simply buys them influence and time - and of course massive military bases that keep Russia's influence in the region limited.

On the other hand Hamas and Fatah do need to work work out and define who and what they are. The only way forward for them and their people is in union and not division. But naturally Israel and the US do their best to make sure this will never be a reality on the ground.

The very thing that brought Israel and it's Diasapora together is now destroying them and those around them.

Big ongoing mess - another big war within the next 5-10 years. Guaranteed.

Obama made a controversial choice of location for his place to reach out to the Muslim world in Cairo, Egpyt under Mubarak. In today’s world they no longer prop up dictators like him to halt the spread of communism but rather the threat to secular Islam. The ongoing state of emergency grants him broad powers to lock opponents up indefinitely. During the cold war the U.S decided they needed this guy on their side. The thin cigar smoking president on the balcony in Baghdad with General Casey whom he later replaced. (Bob Woodward Obama's War) At the presidential level it’s a strongman dictatorship, much like Saddam Hussein, the assassination lead to a former air-force officer who had been his vice-president and who took over under a state of emergency still in force today. Twenty five years later the state of emergency was still in place. He ran unopposed in 3 elections, then he finally ran for re-election under pressure from the $2 billion dollars aid from the U.S (Israel gets the other $3 billion for F-16’s etc and the rest up to $5 billion for the whole region). Seventy percent of American aid is tied to buying back their weapons. In 2005 in an ostensibly open race against 2 opponents he banned the main opposition the radical Hamas styled brotherhood and arrested them during the elections.

Umm Tim I don't know if you realise this but the palestinians are arabs and arabs constitute a virtually majority in the middle east.

If you want to talk 'cultural genocide' then may you should be asking about the forced exile, persecution and onging violence against minority communities of jews and christians by muslim arabs throughout the middle east.

To maintain a dominion by force, certain material goods are required, just as with an economic organization. All states may be classified according to whether they rest on the principle that the staff of men themselves own the administrative means, or whether the staff is 'separated' from these means of administration. This distinction holds in the same sense in which today we say that the salaried employee and the proletarian in the capitalistic enterprise are 'separated' from the material means of production. The power-holder must be able to count on the obedience of the staff members, officials, or whoever else they may be. The administrative means may consist of money, building, war material, vehicles, horses, or whatnot. The question is whether or not the power-holder himself directs and organizes the administration while delegating executive power to personal servants, hired officials, or personal favorites and confidants, who are non-owners, i.e. who do not use the material means of administration in their own right but are directed by the lord. The distinction runs through all administrative organizations of the past.