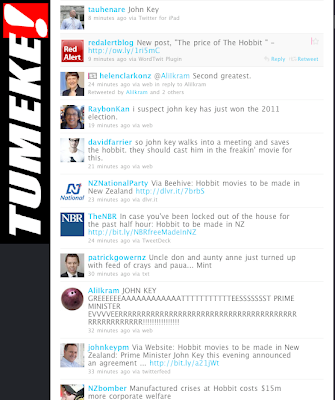 The twitstream is a surge of sycophancy this evening following the announcement that an obsessed small island nation has caved to Hollywood non-threats over not making a couple of films about short people with big hairy feet. If the sum involved wasn't half a billion dollars it would be only slightly less absurd. 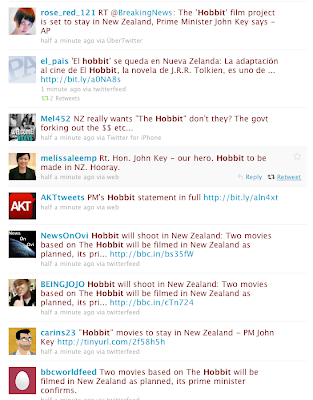 And if those Tory fucking stooges weren't selling off our labour rights as part of the deal it would be only slightly less pathetic. And those pricks are going to rush laws through - starting tomorrow - to screw over workers by pretending they are "contractors" to suit Hollywood. It is just sickening. Whoring ourselves off to ten suits from Warner Bros. 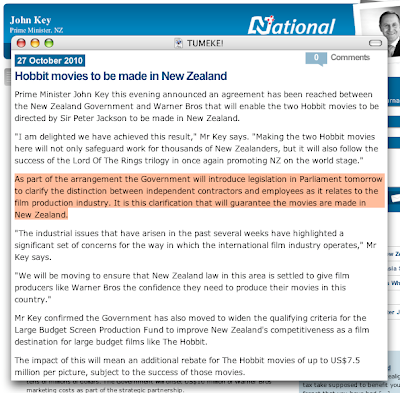 Reminds me a lot of the stooges of the previous Labour government that rolled over and granted Hollywood all manner of rights in this country against our interests; like banning parallel imports of their schlock for a year so they can extort us and delay releases, and the criminalisation of civil disputes (copyright) so they make our government and law enforcement do their job for them.

We just keep taking it from behind for these shysters, no matter which bunch of stooges are on the Treasury benches. That sort of overawed compliance is peasant behaviour. Hicks, straight out of the fucking Shire. They might as well shoot the damn films in Matamata itself - or any NZ town or suburb - there's no need for the elaborate sets, it's the characters they are after. And they will find more than enough backward and naive prols bumbling around to cast four million fucking Hobbits.

Is this the start of the back firing that Mr Bradbury mentioned in his last blog post?

If so then I think the National Led government would be quite keen on causing something similar in the future.

The way they have managed to tie in the Tourist promotion as part of the deal was a master stroke you have to admit. The left has been made to look positively foolish on this one.

If you really believe all this then you need help. And yes, I'm serious.

When you can actually generate some wealth, let alone half a billion let us know. Why are wealth consumers so keen to criticise the wealth creators?

Wow Mark, wealth consumers versus wealth creators, hadnt heard that obnoxious turn of phrase before. You actually made me throw up on dog... Good thing hes a socialist & is ok with it.

wealth creators LOL oh you must be meaning the 15% GST tax hike LMAO i could pay my flight ticket fast enough.. forward frodo

To borrow a phrase from someone, (I can't remember who though), Bashing the wealth creators as a favourite past time for New Zealanders. Ugly people, real ugly.

Oh Gosman, you are so desperate for attention. 'Bashing wealth creators' Oh please, Warners manufactures a crises to get $15million USD and you are still trying to spin it as the Actors Unions fault while proclaiming it as a great victory for John Key. Your self delusion is wasted on a bank clerk.

Come to NZ everyone.
They'll suck & ever so eagerly swallow anything you put in front of them.
They'll even fucking amend laws on the back of a promise.
A film company causing a NATION to amend laws on account of TEMPORARY employment.
And not only will they not be alarmed or upset. No not at all. Conversly, they'll be abso-fucking-lutely ecstatic about it. Elated.
And here's the kicker.
You can charge the kiwi tax payer extra millions for it.
Easy meat