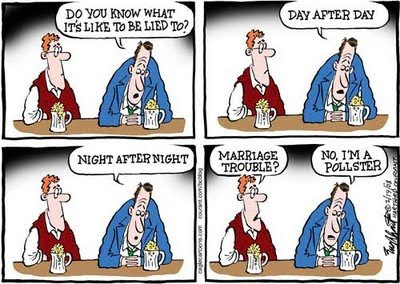 YAWN - 54% of NZ support National do they? Really?

I note once again that these Polls are pointless brainfarts that serve only to create the impression of support rather than measure actual support. We don't know what the call back ratio is, we don't know if only landlines were used, were cell phones used (in a recession where the poor are avoiding debt collectors and can't afford land lines their opinions are simply not registered) and MOST importantly we are never shown the weighting. What is weighting? Each poll has to equate to the percentage make up of the population, so let's say there are 10% Maori, the Poll has to have 10% Maori, problem is that most of the time the Pollsters never get 10% Maori opinion, so what they do is they weight whatever opinions they do get from Maori to fill up the necessary 10%, now if you are only getting conservative opinion when you call during dinner time, then that is the opinion that will get magnified, the danger is these brainfarts become self fulfilling prophecy. The only polls worth real examination are deliberative polls, but because they cost so much money to run we get these cheap brainfart polls.

What will be interesting about the Super City election if Brown wins is that it will show up the massive deficits in public opinion polls as all the Polls put out so far have shown Brown and Banks neck and neck and I would claim that is because the current polls in this economic environment are missing huge chunks of the population. The results from voters who have already voted and sent their postal ballots back show an overwhelming support towards Len Brown, if that plays out and Len wins by a landslide, the current public opinion poll models claiming National are leading by over 50% can be challenged. 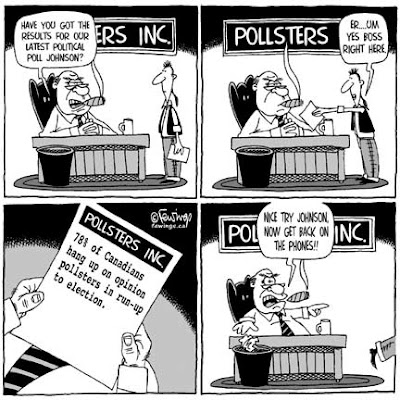 HAHAHAHA you are so predictable. The poll about the supercity mayor was completely correct and fact based; this poll which supports National, is complete bullshit isn't it bomber. Anything to try and brainwash your valued readers who crawl from their rocks once a day. Face it: any poll supporting National or Police or Farmers or white people is bullshit; any poll supporting looney len, brown people, communists, lefties, criminals,lawyers, unemployed, dole bludgers etc is right on the money!
SO FUCKING PREDICTABLY ONE EYED.

Yawn - no brave anonymous poster, it is you who is sadly predictable. The supercity 'poll' referred to in the SST article is based on those who have already voted and as such differs greatly from the TVNZ poll. Your inability to understand the difference in order to make a petty attack on me is what is predictable Anon.

Now IF Len Brown does romp home, it will call into question (based on the reasons I've listed in the main blog) the ability to reflect public opinion as the polls so far have suggested Brown and Banks are neck and neck.

According to the Horizon 'exit' polls (and that is the best way to describe them)Horizon's poll of 570 voters that who had already returned their papers showed Brown on 49% support and Banks on 23%.

As you were Anon.

Unfortunately, he only represents liberal elites and no-hope fuckwits.

Unfortunately, he only represents liberal elites and no-hope fuckwits
Normally I don't bother posting shit like this, but it's so amusing I couldn't resist. Your response to my post is a conspiracy regarding me and liberal elites??? This is getting desperate even for you Anon, but look, let's test my theory out with the actual supercity result.

Do we know the make up of those exit polled?

How were they chosen, and do they represent a broad spectrum of society?

So that's 570 voters out of hundreds of thousands of potential voters?

Until we see the breakup such as demographic, age, and area this poll is worthless and to suggest anything otherwise is truly sad.


I am just wanting to make the point that the opinion polls that you are saying need to be called in to question usually end up pretty close to the election result the closer they get to an election.

sure, they are always slightly artificially high so far out from an election. but when MOST (if not ALL) polls are showing a similar result (eg 49-54% for Nats and 32-35% for Labs) then i would consider them to be a reasonable idea of peoples feelings at the time of the poll.