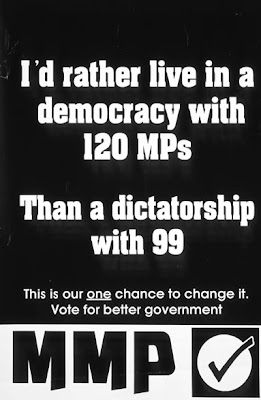 So after blaming ACT on MMP (note it wasn't John Key's fault he cut a deal with the far right Party of hypocrites whom he has allowed to dictate policy - oh no, it was all MMP's fault), it now turns out that John Key has on the quiet been trying to dump MMP for a system that will lock the elites back into power the way First Past the Post allowed.

There was no referendum promised on MMP, that was an urban myth created by those who hated the idea of all those women, Asians, Maori, Gays, Muslims, Transgendered and marijuana smoking Rastafarians having a say in policy. Under First Past the Post, Parliament was made up of rich, white, straight, old men, (the rump of the National Party voting block) and they decided what was good for the rest of us. MMP has allowed a wider, greater representation to occur making our democracy actually reflect the make up of our population.

National wish to gerrymander this representation so that it goes back to the good old days where white, straight, rich old men get to run the country minus all those annoying 'others'. This is made most ironic by the fact that ACT and National are currently the ones abusing MMP with Rodney holding Epsom and rorting the system. 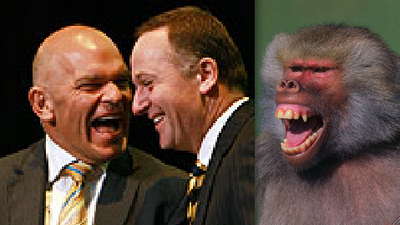 The question is will NZers get conned into changing the system to make NZ less democratic and allow those rich, straight, old white men take over again. No wonder Rodney and John are laughing.

Why can people not have a say? Or is it only people with Political Science degrees who are entitled to a point of view.

No way, I love hearing from stupid people especially ones with very strong fundamentalist beliefs in some hell fire and brimstone religion. Ones who never let the facts get in the way of a specious argument. Or ones who mindlessly adhere to a political standpoint because that's what they were brought up to think. Yay stupid people, Woo hoo Morons!

I won't be voting to scrap MMP.

Anon:I don't need a political science degree to understand that FPP is for dictators who want to hide behind a two-party system. And if you do, then you are a mono-lingual Moron!

PROPORTIONAL Representation ALL THE WAY Baby. With local counting...no centralised computerised vote counting systems like they have in America. How easily THEIR elections have been fixed with computers not people doing the counting.
Keep our electoral voting system safe from tampering, keep our Democracy PROPORTIONAL. [While I'm at it: Make our TAX system PROPORTIONAL again,too. Flat-Tax gives me an uncomfortable gag-reflex ]

Our politicians are STILL coming to grasps with the expected changes in their behaviour under MMP.That's their problem,NOT OURS ....but they better lift their game. I'm getting sick of their whinging and blaming MMP.And primary-educated kiwis just stupid enough to be able to read and write but not smart enough that they can't reflect and think for themselves. Can't see the wool being pulled.(Sigh)

Oh but Bomber......John is such a luvly krismatuk man. How on Earth can you be so mean to him? Oi jis wish more New Zilluners were loik him. The trouble is though we'd need a better forecasting service to accurately determine which way the wind was blowing before we expressed an opinion (or a vote).
Bahhhhhh, bahhhhh, bahhhh.
Oh how I long to be able to lay claim to being rich....a self made man, and with a clear conscience as to my integrity and loyalty to that nayshun oi aspire to be Proim Minsta of.
It just kills me, I'm so inadequate!

After seeing the voting debacle that is Australia, in action, I'm even more convinced MMP (with a few tweaks) is the way to stay!