Cops can never be murderers... rapists, sure, but never murderers. 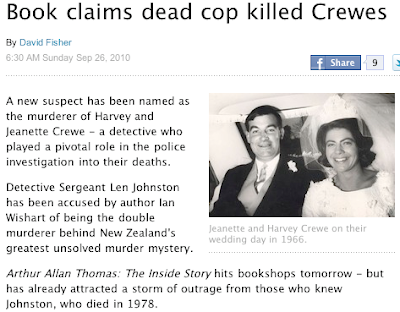 NZ Herald on Ian Wishart's latest exposé. A cop may have been the killer of the Crewes. It makes sense. The coppers are all in a tizzy. 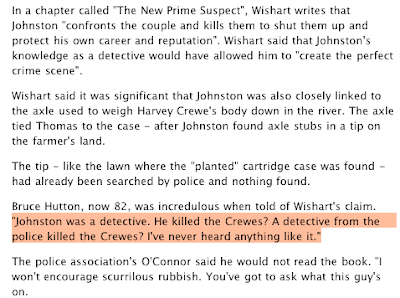 "I've never heard anything like it," the copper says. Why? Because they only plant false evidence to stitch someone up? Because they only torture and rape? I think you will find they can do murder too - it's not much of a stretch. How does that old song go again:

Well it seems too much of a coincidence with Rickards, Schollum and Shipton to be legit - that would just be too spooky.

But I have read of a case in the 1940s in Northland where a cop called Barrett (I think it was - not sure of the spelling) tried to kill a man he had lured out into the gumfields. But he only wounded him with a shot from his revolver and he managed to escape and ran off. The cop then went to his house and rang up the likely place he would be running to, making up some story and telling them that the man was a killer on the loose and not to listen to him. Fortunately (from what I recall) he was already there and the story didn't add up and the cop was later charged. If anyone knows more please put it in the comments section because I can't find it online - it was in a local history publication. There was also a case listed in the "100 years ago today" column in the NZ Herald a few years ago about a cop in Queen Street who kicked a man to death. I'm sure there will be many incidents of killings if people care to examine the unofficial records. The cops don't have a wall for all their victims they have killed, just a wall for all their fallen heros.

Cops don't think cops are capable of committing any crime. It's a ludicrous position, but that's the police for you. If they can beat, torture, rape and so on they can obviously kill. Whether any of them have ever been caught and successfully prosecuted for it - in a system where the police don't believe police can commit murder - is another matter.

UPDATE | 5PM: A commenter has alerted us to the case of David Charles McSweeney who stabbed his wife to death in 2006. Although he was not a serving policeman at the time it is worth noting if only because of the familiar scenario of a glossed over veneer of normality covering up a dysfunctional relationship and a psychopathic personality:

"He was a good bloke, Sue was a nice person. It was totally out of character," says Eddie Law.

Mr Law knew David and Suzanne McSweeney for at least 10 years. He and McSweeney and their wives went fishing together, socialised together, ate together.

He struggles to comprehend how the former cop and "average Kiwi bloke" could, in what prosecutors described as a frenzied attack, knife Suzanne up to 30 times.
[...]
There were "incidents of violence" in the relationship, apparently, but Mr Law doesn't know anything about them.

"I only saw the nice sides of him. If there was [violence] it is either hearsay or parts that I missed."

The question still remains: has there ever been a serving police officer charged with murder in this country? I am reminded of Constable Keith Abbott who killed Steven Wallace in Waitara. Abbott was never charged with murder by the police - they did everything possible to get him off. It was the family in the end who brought a private prosecution and it took the intervention of the Chief Justice to get it in front of a jury. Unfortunately in that case the sheep let the wolf go. So, to rephrase: have the police ever charged a serving police officer with murder in NZ?

Don't usually like Whishart, but love it when he has the porcs squealing. Fourth estate is at its best when it holds the porcs to account.

You hate the police and so believe Wishart.
Do you believe everything else he writes too?

Cops don't think cops are capable of committing any crime. It's a ludicrous position, but that's the police for you. If they can beat, torture, rape and so on they can obviously kill. Whether any of them have ever been caught and successfully prosecuted for it - in a system where the police don't believe police can commit murder - is another matter.

If you are going to make. shit. up. At least have the facts Tim.

My suggestion is to go to Central Library and spend a day there going through the microfilms and photocopying the information. Im sure this will be very interesting reading, knowing about the history and where we are today.

Anon 8:52am: Thanks for the MacSweeny case - I will post that as an update, although he was not a serving police officer at the time of the murder.

@ anon at 8:46am ... ooohhh bless wee cotton socks ... poor thing, was it too early in the morning for you? ... honey, when you resort to attacking the messenger and not the message, you have lost the debate. I never said I hated the police. Never said I believed Wishart. Am just a fan of accountability. Now relax, and let the adults talk !

honey, when you resort to attacking the messenger and not the message, you have lost the debate

And what was your message again, child?
Oh, thats right:

Don't usually like Whishart, but love it when he has the porcs squealing.

But, but, but child, you said you don't hate the police?

Yet you love it when "the porcs are squealing"

If you don't believe Wishart, child, how can he hold the 'porcs" to account?

You can't have it both ways, child.

Fourth estate is at its best when it holds the porcs to account.

Am just a fan of accountability.

From a person you don't believe?

We adults aren't talking child, we are ripping your post to shreds.

David Charles McSweeney was not a good bloke Mr Laws. I was his partner prior to Susan and I managed to escape after 5 years of abuse and violence towards myself and my two children...David should rot in jail but I know that will never happen. He attempted to kill me twice...he is a very nasty person.