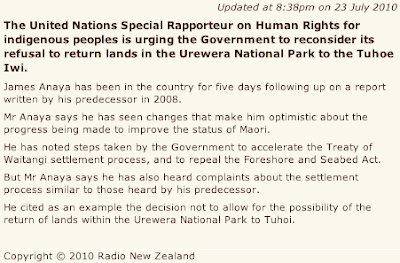 Aucklanditis always afflicts the office workers about lunchtime on Fridays and some as early as Thursday afternoon. It's funny how it does that, it must be a CBD-wide sick building syndrome. The UN woman kept looking at her watch wondering where everyone was and she didn't seem to understand about it being Friday, she thought a Friday press conference is normal scheduling - so naive - she was from Geneva.
He was unwilling to prejudice his report by saying... anything... at all (although I note the trigger word for him interrupting the question about the effectiveness of the UN was "Israel" - he was prepared to tolerate it up to that point). He did not think much of the use of international mechanisms to solve our internal differences - which was unexpected given his own international legal battles which were successful. Then again he is here at the invitation of the government and as long as the process has not reached an impasse he is unlikely to say that a resort to international organs like the Permanent Court of Arbitration etc. is needed. His remarks made no reference to the inequality of the official languages in the English-only compulsory state education system, but he was aware of it when raised.

It's a situation report in an ultra-political context and yet he must be seen to be neutral and that meant he was giving vague and non-specific answers. He could hardly respond to the generic questions, so there was no way he could answer a specific one and it seemed futile to ask in the end. The other difficulty in wanting him to offer his opinion on making an evaluation of progress since his predecessor reported is that his visit comes in the middle of a re-negotiating the repeal terms of the legislation that prompted the (now standing) invitation for the UN to inspect us in the first place - the Foreshore and Seabed Act 2004.

I would liked to have heard him condemn the unilateral Crown deadline of settlements and claims as prejudicial and provocative, but he said he had been assured by the Crown that their deadlines were only nominal and were subject to change. Historically he's right - that's how they end up being, but in principle it's still wrong to try to impose one without consent from the other parties - "vulnerable to political discretions" is how he put it in regards the Treaty principles. Did he mean process or the principles themselves?

Unilateral exclusive Crown interpretation of the Treaty is the current situation. The NZ government wrestled native policy off London in 1865 and the Treaty of Waitangi was no longer Whitehall's problem as far as HM Secretary for the Colonies was concerned. The NZ government agent can offer the London debt market a sovereign issue backed by the land holdings they were accumulating through the ethnic cleansing of the Maori - it was a win-win for the British race and British mercantile commerce to their way of thinking. A few years later the Treaty was declared to be a bum rag by the NZ judiciary and the government opened up freehold title to non-British subjects and the speculative land pyramid was crudely hewn into the honed monolith it is today with it's RBNZ and OCR and tiered, revolving mortgages. It is all based on the Crown's legal framework and the legislation underpinning land transactions. It's one long title encumbrance.

But he was being "optimistic - as only I can be." He said he did want submissions: try here.

He was critical of the government and I agreed with most of what he said:Media statement 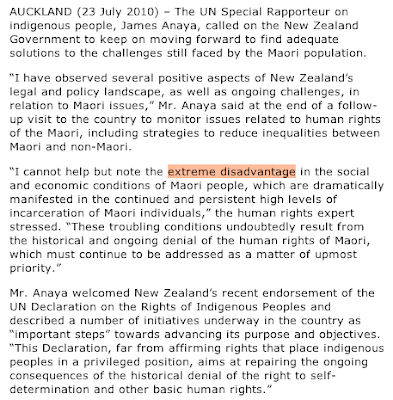 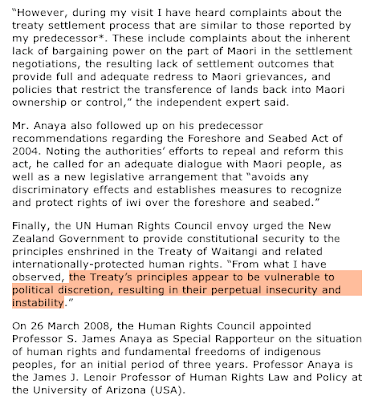 170 years on and no one knows what our date of independence is. That will tell him something about our slackness if the poorly attended presser hasn't. The consensus in NZ is to do things as slowly as possible to avoid conflict. 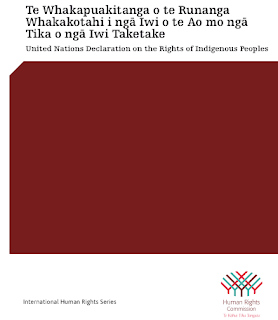 The UNDRIP is applicable to NZ via the Treaty especially. Indigenous pre-supposes colonisation. NZ is not in a post-colonial stage - ditto the "white countries" who also initially refused to sign the declaration. NZ, Canada, Australia and the US are colonial countries with imperial instincts, and each one with their own brand of native policy - outposts of another civilisation with an eighteenth/nineteenth century agenda of European expansion firmly at odds with the indigenous/first people and their authority, in some cases their existence itself. These are colonial states with a forced peace, not a settled peace. Their population transfer policies are still open-ended - that's one of the planks of colonisation - with acquiescence and under-education in abundance and rebellion confined to the chatrooms.

Your last paragraph is astounding Tim. Can you confirm that you believe is not in a post-colonial phase?

Busby: Yes. If you can answer when the post-colonial phase began for NZ then we may be getting somewhere. I haven't heard a convincing date.

The NZ economy was largely based on exports to the UK until they sacrificed NZ in the early 1970s in favour of Europe - so the economy could be said to have been colonial until at least the mid 70s. Culturally and linguistically and socially and in most respects NZ is still a colonial society and the government system is still what it was essentially in the 1800s too: a white-dominated/settler parliament with direct executive powers over a unitary and centralised administration nominally operated in the name of the Queen. How does NZ really differ from Rhodesia? The white government declared unilateral independence in 1965 in Rhodesia, but effectively the same sort of men achieved that status 100 years earlier in NZ. Rhodesia had to go through a war and an interim Zimbabwe-Rhodesia and a retrocession to the UK to get independence. NZ is supposed to solve all these issues internally as far as the UK is concerned. My argument is just because the UK has forced NZ over the years to be more independent doesn't mean we are in reality anything more than the colonial entity we were before. The constitutional relationship between the NZ and UK governments is one of mutual recognition as independent and equal nations, so in that respect it is not colonial, but that's not what I am saying here is important in assessing whether a country is colonial or not.

Thanks for your insights Tim. It inspires me to discuss these issues more often.
My problem remains that there seems ultimately to be a conflict between Indigenous rights and human rights. But then, how many indigenous people were involved in writing the UDHR? Very few. Some believe that human rights as they are understood at international law, is another imposition manifestation of colonialism.