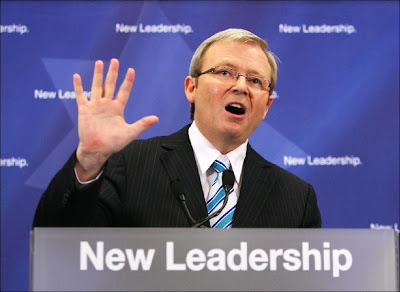 Julia Gillard prepares for battle
Julia Gillard has vowed to "fight with every ounce of my being" to take Labor to victory at the next election from her historic position as Australia's first female prime minister. She will go to the polls "within months" after Kevin Rudd stepped aside on Thursday morning, handing her the leadership unopposed after an unprecedented 24 hours in Australian politics. And, in another shock development, Finance Minister Lindsay Tanner signalled on Thursday he would stand aside at the next election to spend more time with his family.

So what the bloody hell just happened in Australia? The most chilling corporate coup the country has ever faced to prop up a Lady Macbeth PM is what just happened and this should serve as a warning to us as this Government attempts to strengthen the power of corporate mining in this country.

The mining industry had initiated a corporate funded coup against the Government after Rudd announced his mining tax. They blitzed the corporate news media with advert after advert after advert of claims Rudd was about to destroy the economy by enforcing real distribution of wealth from these greedy corporate mining companies. The mining industry then set in motion promoting any Polls that showed the impact of their propoganda working, add to this the power of the climate denial nutbags who have been flexing their muscles ever since the failed climate gate fizzer and momentum was artificially built against Rudd.

The mining industry then turned their attention on the unions and right wing faction of the Labour Party, bought them off, Rudd was gone.

The ease with which the mining industry in Australia has been able to implement a coup to halt the mining tax, and then to have the entire event wrapped up as some type of win for bloody feminism would be funny if it wasn't so awful for democracy.

Surely if a 40% mining tax was going to hurt workers are not the unions right to oppose it ?

Well that depends on the consequences. We are talking about windfall profits, these large corporate mining companies are amassing huge money at a time when the global economy is on the verge of the double dip. That doesn't need to be at the cost of union jobs, it's the profit margin minus the labour costs.

jesus bomber grab that scrrenshot to the right of this of bill english looking sad! its awesome!

Climategate wasn't a fizzer. It proves a number of things, namely that the warmers conspire to control the peer-review process & to lock everyone out of even looking at their raw data.

Just because NZ's energy retail prices have just gone up by 5%, don't count your chickens just yet u disillusioned green warmers.

When the world burns, your air conditioning won't save you.