Q+A and The Nation 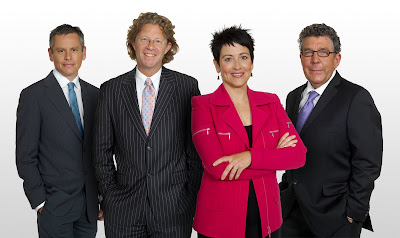 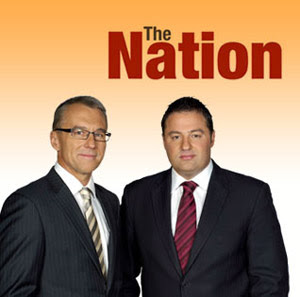 The Nation
That awful Jane Clifton who never seems to criticize Murray McCully in that awful middle class lifestyle for rich house wife women's magazine 'The Listener' has taken over the Scoop. It only worked as a segment when they actually had a scoop (like finding out that white people on the North Shore had decided against the Tuhoe deal), now it's just random shit some graduate has throw together at the last second, it's weak and it's weaker to open with Jane. Say hello to Murray for me Jane.

Dr Nicky Smith is on justifying the Emissions Trading Scam which won't reduce climate changing gases, and instead simply subsidizes big polluters was being debated. The funny thing is that the Climate denying hicks whom ACT are dangerously unleashing hate it for one reason (they claim global warming isn't happening so why tax them) and greenies think it's bullshit because it simply doesn't go far enough and serves only to subsidize big corporate polluters.

Andrew Holden from the Press and someone from RadioLive are on the panel, they are boring suits, it's so dry and dead. The debate is crap. Yawn. Yawn. Yawn. Who the bloody hell actually watches this show? Let's have a look at the ratings...

...OUCH. That's one very small audience isn't it? This show could easily triple their ratings, why do they instead make it so dull? Why? Why? Why? Do they think if they purposely are boring and unpopular that it's the only way they'll get NZ on Air funding?

Second interview is Cunliffe, he get's it - he's speaking to the public who may be watching this show (very few as it turns out), he's trying to explain the ETS, and he uses that great line on Kiwisaver when the discussion turns to asset sale which is 'why would NZers need to buy something they already own' (this will become a very strong counter to the sale of Kiwibank).

Cunliffe is on full attack mode and it's great, he is very smart and promises a huge call tomorrow where he has independent advice claiming the budget will leave a 9 billion hole??? Can that be right???

I've never seen Cunliffe much out of the House during question time, seeing him this morning makes me wonder why? He's very good, why the bloody hell aren't Labour using him more? If it's a fear that he'll over shine Goff then have them set up as a partnership working together, those two should be EVERYWHERE together.

Piece on Lockwood Smith was good, I really like Smith as Speaker, he has done a bloody good job and Parliament is a better instrument of democracy for him being there, I can't forgive him for lying to Students about Student Loans, BUT he is a bloody good speaker.

Guyon is all over uber technocrat Treasury Secretary John Whitehead, who admitted that Treasury are working on papers to counter-spin arguments against privatization. So much for Bill English simply brainfarting out loud, National are telling the Auckland Business Mafia who bankrolled their election win in 2008 that they need to put their hands in their pockets one more time to get that creamy privatization National Party deluxe flavour and that's what that little media flirt with Bill on Kiwisaver was all about.

Sue points out that lower tax rates don't raise standards of living and that it was cruel to the poor. Nigel points out that Roberts didn't hold up any hope of real property reform. Fran believes privatization now augurs the blessed age of enlightenment.

Chris Baker, the CEO of mining lobby group Straterra, and Mark Bellingham, North Island Conservation Manager for Forest & Bird are in the bear pit with Paul. Grrrrrr. It's a feisty affair. Chris as sharply paid as only mining can pay, Mark dressed like a DoC formal function.

Chris claims we don't understand potential. Mark fights the good fight but Chris is very good, he understands that all he has to do is just say, 'that's utter nonsense', that's how they will play this game now, dominate the conversation and claim all arguments against mining are 'utter nonsense', (Putting a professional lobbyist up against a well meaning bloke from Forest & Bird seemed a little unfair, put that little mining toady up against someone from Greenpeace and see how long he lasts).

Paul fires up and demands to know why we are screwing with Schedule 4, Mining man says most of the minerals are in schedule 4 land and we need to move forward because 'times have changed'.

Yes, times have changed toady Mr Mining man, the public won't buy mining lies any longer and we will challenge you, he admitted that mining companies will have to weigh up local militancy against mining on schedule 4 land and part of resisting this attack on our Conservation land may well be acts of civil disobedience against the equipment mining companies take in there.

Fran says drill, drill, drill but she accepts that the politics are going against the Government. Nigel points out that Brownlee has done a bad job of selling it, Sue points out that Nick Smith in 97 said Schedule 4 would stop the argument about where we will mine, and yet here we are doing it.

Highlight was holmes destroying Bradford with maths over retirement age. She squirmed - couldn't handle the facts.

Holmes is a joke

The guy is a fool

But holmes was spot on calling kofi a cheeky darky.

Mr Holmes should retire and make olive oil. His questions and his answers session was pathetic.
Anon. I think Sue Bradford is a wonderful NZdr, who has done more with her difficult life than you could ever dream of.

Bradford is a bit thick. Most lefties are. Holmes hit her with maths - lefties dont like facts, figures, numbers etc because it destroys her argument.

Simple fact, we need to raise the age of retirement, the country cant afford not too.

Bradford says "its not fair" but offers no solution as to how it can be afforded. So glad she has gone.

Andrew Patterson someone from RadioLive are on the panel, they are boring suits, it's so dry and dead. The debate is crap. Yawn. Yawn. Yawn. Who the bloody hell actually watches this show? Let's have a look at the ratings...

...OUCH. That's one very small audience isn't it? This show could easily triple their ratings, why do they instead make it so dull? Why? Why? Why? Do they think if they purposely are boring and unpopular that it's the only way they'll get NZ on Air funding?

Second interview is Cunliffe, he get's it - he's speaking to the public who may be watching this show (very few as it turns out),

The ratings are quite high for that time of day.Nevermind the low level of satire since they took facelift off the air and spin doctors.

The present dis-order of society can be extended into a future dominated by heirachy and well into the future as long as the malcontents dominate the political process the working stiffs.Our project of imagining with our political imagination our project of social transformation which involves a society different from the crime ridden cess pit we have now.The negativity of the news on mainstream media dis-allows us to escape the mass media's reinvention on facebook etc.Mass technology surrounds our critical consciousness with soft porn music videos and enough time for a quickie if so inclined and I'm not by the way.Amused that is and the chief 'queer studies' censor has done a piss poor job of screening out the worst excesses of freddy kruger amerikana.This crowds out our ability to imagine a world not dominated by this.To anticipate a different world to the one we have now.Critical thinking needs imagination to make us anew social reality to this one.

HOW POOR IS "THE REVOLUTION" THAT DOESN'T DREAM?

but here the figure is only about 12 per cent.
SO THERE IS NEARLY A MILLION KIWI STUDENTS ARE THERE?