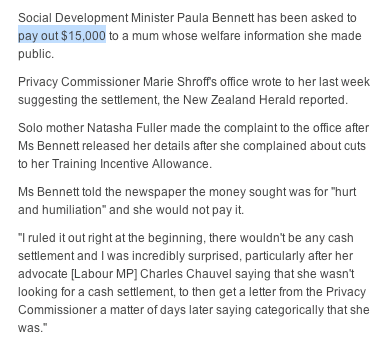 I ask again - as I have asked since the beginning - who pays? Either Bennett has to pay herself and admit that what she did was wrong - or the Cabinet that backed her has to pay. Her colleagues let her get away with it at the time - that was wrong. Will she get a whip around from them for letting it get this far? Are they going to share the blame? 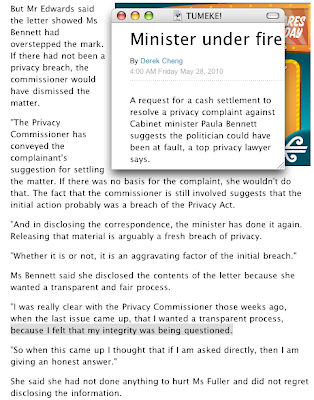 The Minister thinks her integrity is being questioned?

...I wanted a transparent process, because I felt that my integrity was being questioned.

As soon as legal action is threatened the Minister has to tell Cabinet and they decide whether she has to pay personally or whether all the bills will end up coming out of the Crown's coffers. If anyone has to cough - it has to be her. Not the taxpayer.

She purported to authorise - as the Social Welfare Minister - the publication of these private files by the media. J Edgar Hoover without the subtlety... though probably similar wardrobes.

She's unrepentant and unable to concede, on the one hand, but having said (in parliament I think it was) that she would only say sorry if she was made to. That's an interesting strategy. Continuing to breach confidentiality - after having insisted on it from her opposite - even more so. Is that appropriate behaviour in a fair process? She is playing politics, and playing it poorly.

It is very sad that her senior colleagues didn't step in immediately to sort it out at the time - when I suggested they do so - because let's be clear about what this case is all about: Paula Bennett is maintaining that a Minister can authorise the publication of personal, private and confidential files of political opponents held within their department (and can use state servants to do so).

Would the Speaker let documents be tabled in parliament that were confidential and private that identified individuals like the information released by her in this case? I don't think Lockwood would put up with those antics. Could you imagine trying to pull a stunt like that in the House!

Yes, what she did was very wrong - and she can't claim a colour of right because it was essentially malicious.

Maintaining an intransigent position is doing more damage to her integrity than the eventual form of official rebuke. If she can just admit to it she can settle and move on. But Bennett is still hanging in there not realising that $15k was yesterday's offer. It might be $30k tomorrow - and all on her own tick if Cabinet back away.

What if the complainant said that the $15k would not go to her but go to charity, and she wants Bennett to match it with another $15k? If Cabinet want to back her that's another $15k. Now we're up to $45k. Does she see how this game works? The price for trying to take us back to the Muldoon $50k days of bullying and misuse of power by politicians against whomsoever they deem "the enemy" must be substantial in order to discourage any further misuse. At the time of writing she still thinks it is OK to act like J $55k Edgar $60k Hoover $65k. She really ought to take the earliest possible exit from this type of game. 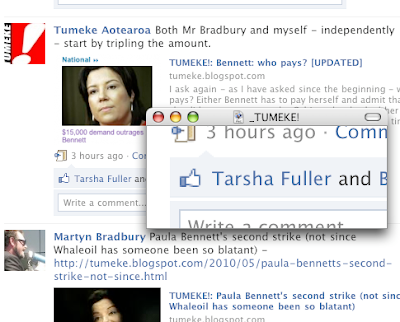 As with defamation payouts for Ministers, it would be the taxpayer who picks up the tab.

The Cabinet manual says that the issue has to go to Cabinet once legal action is threatened. This may be soon given Bennett's brush off: http://www.nzherald.co.nz/nz/news/article.cfm?c_id=1&objectid=10647715

The Cabinet will be forced to deal with it at that point (assuming it hasn't already been discussed). Either they have to admit their own failings - collectively -and pay up with Crown funds, or they punish Bennett and make her pay it all herself.

Why are you suddenly whining about who pays?

Less money for your bros in treaty settlement?

How petty of you.

Ummmmmm....noone has to pay, or at least the $15,000 that has been mooted. That is why Bennett has stated she is not paying.

This is just something the Privacy Commissioner has suggested would acceptable to the complainent to make her feel better (after the complainent had originally stated she was not interested in a monetary settlement it has to be added).

As far as I am aware the Privacy Commissioner has no power to force the Minister to cough up this money. If the complainent wants to get the money then she will probably have to pursue it through the courts (which could decide on a completely different figure than $15,000).

Oh no, its "Bash the Benny time"

bennett should pay.....perhaps she can stop buying pies for a week....that should save her 15 grand.

Gosman wrong again? How can it be?

Did you read that article Mr Bradbury or are you jumping to unjustified conclusions yet again?

If you had read it then you will see that the Privacy Lawyer has suggested that, in his opinion, the fact the Privacy Commissioner has passed on details to her regarding what the complainent would like means that the Minister is at fault.

There is no suggestion that the Privacy comissioner can force the Minister to pay up the $15,000. I stand by my view that if the complainent wants to get the compensation and the minister is unwilling to pay then the only option is trhough the courts.

You have a different take on this then present your evidence.

Looking into the Privacy Act 1993, (which perhaps you should have done Mr Bradbury instead of shooting off your uninformed opinions on the matter), it seems I am right. The Prvivacy Comissioner has no actual powers to enforce any settlement. All they can do is refer the matter onwards to other bodies.

Gosman you don't need to post anonymously. You are wrong in terms of Paula not paying, she's been snapped breaching the law and she is going to get punished. I would have thought for a law and order freak like you would be endorsing my call for Paula to be punished under the new 3 strikes law!

the privacy commission cant make her pay but this will now be put through the human rights by the way it looks and then paula will be made to pay. If fuller was not right this would of been dropped long time ago and settlement would not even be mentioned by commission so its obvious that fuller is right. the commission is like mediators but human rights is like high court and if it goes to human rights its no longer fuller vrs paula but crown vrs paula and fuller is a witness for crown.

and also no matter what the outcome is in human rights im sure people of newzealand and labour will all want answers just because miss fuller is on the dpb does not mean she is second class citizen with no rights to stand up. Do people think a old guy who has paid taxs is not allowed health care when he gets cancer cause in newzealand we all have rights. what fuller is doing is speaking up saying we are all equal in our country and we all pay taxs. Its about time people really put their thinking hats on....two fathers must pay more childsupport than the $260 week standard dpb so really she is getting no more than the rest of us because rest is family assistance like everyone else.why dont people target the fathers to support their children.why dont we be like finland where they have a website where everyone's income details are open for everyone to see no secrets no second class citizens.