3 strikes law will reduce crime by10-20%? How stupid is David Garrett? 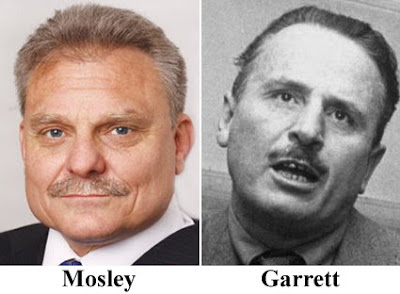 Three strikes to cut crime 10-20% - Act
Act MP David Garrett has come out in fierce support of the controversial "three strikes" legislation, saying the law will reduce crime by 10-20% and target only the most dangerous offenders. Earlier today, Garrett said he thought a 10-20% decrease in crime because of the law was realistic. "I don't have a crystal ball. I can't say whether it will be 10%, 20%, but I would expect a marked reduction once the policy is fully in place."

Seriously folks - how stupid is David Garrett? He honestly thinks this law which will lock more NZers up for longer periods of time in corrupt and violent prison systems, including a private prison company with an overseas record in violent prisoner beatings, will LOWER the crime rate by 10%-20%???????????

Jesus folks if it's so bloody simple why hasn't anyone else in the world tried this out with the same glowing response? How crazy is Garrett to actually believe this? Every time the crime rate comes out now there will be the reminder of this stupid, stupid, stupid statistic he has cited.

Poor John Key would need an extra dose today to glide through the rage incurred by this knuckle dragging MP for Cross Burnings.

Ever since ACT stopped trying to have broad appeal and latched onto powerful niche lobby groups like the Sensible Sentencing Trust to maximize MMP without getting over the threshold with the electorate of Epsom (and ACT are fermenting the same fanaticism again with their anti global warming hicks), Hide has been held hostage to these radical fringes of NZ society.

Garrett who has previously appeared drunk on Eye To Eye making homophobic comments, wanted to stomp all over the human rights bill to pass the 3 strikes legislation and referred to Government advisers who claimed it contravened human rights as policy 'oicks', is not really someone I think should be making wide ranging medieval law and order policy to satisfy the angry creams of the lynch mob.

Oh and let's not forget his oral sex advances around the water cooler with female workmates. Icky, very icky.

Maybe the whole point is to take out of circulation those people who are convicted of serious criminal offense such as violence and sexual offending while is probably about .05% of the entire crime rate. In this respect when your claim that it will not substantially reduce the crime rate is flawed.

Can you honestly say that someone who has convited for two rapes should not be treated differently?

If the law prevent one women from being raped is it worth enacting to you Bomber?

From what you say it appears not.

I'm sorry Anon, could you just clarify how much crime will be reduced by David Garrett's 3 strikes law - is it 10% or 20%?

Great post Bomber - you accurately portray exactly where ACT are as a political party. They have turned into a total comedy ACT, sleazing around on the political fringe, waiting to jump on any issue that might ensure their political survival in a time when their actual party policies resonate with about 2% of the population. They're irrelevant.

I didn't say that. I said that this law is aimed at recidivist offenders engaging in crimes of a violent or sexual nature. Given that 99% of crime does not actually involves the commission of these kinds of offences then it will not have much effect on the crime rate overall but will have an effect on the most serious repeated criminal offending.

Therefore not to support is is to encourage this kind of offending.

Is that clear enough for you?

Sorry Anon, I'm missed you a second time, so is it 10% or 20% that David's law will lower the crime rate by? Because when you think about it, even if we take the lowest range David named at 10%, my God Anon, that would be amazing wouldn't it? I mean reduction in crime by 10% is extraordinary, Christ, if he nails 20% I'd even vote for this brilliant, brilliant man, so again there Anon will Garrett's law reduce crime by 10% or 20%?

Or could the great man be talking out his arse?

I am sorry Bomber I dont give a fuck if it makes a 0.01% difference, I dont want someone who has raped someone 3 times on the street ever-fucking-again.

IF someone rapes, smashes up, steals something whilst threatening to maim / kill three times, and gets caught and convicted three time (no small feet), I dont think it is possible to be manifestly unjust to make them stay in prison for the max time cause frankly they fucked up, three fucking times (at least).

So sorry, no. People getting all jinxy about 3 strikes in its current form can gtfo because we don't care. Repeat murders rapists and thugs are fuckwits and frankly can gtfo.

The focus should be on what crimes are currently included shouldn't be (i.e. beastility) rather than the law as a whole is a failure.

Or could the great man be talking out his arse?

Garret is a twat, course he is talking out his arse.

Doesn't make the law bad however.

Just to point out Jeff, bestiality isn't one of the crimes, one of the laws sounds like bestiality but if you look it up it is actually forcing someone else to commit bestiality, which is a pretty horrific offence and should be in there IMO.

We are turning into mini America and everyone is lapping it up. Their system is corrupt and unfair and we shouldn't aspire to locking everyone up. The only idiots who are for this, shown in the media were private prison lobbyists.

Instead of this stupid law we should be focusing on rehabilitation. You're point about someone commiting a crime 3 times e.g raping someone, well now with National you have to be deemed mentally ill to get ACC help if your a rape victim, so who is really benefiting?

Cut the crap and realise this plan is for business to take over the jails and no one is safe when they disregard human life by throwing away the key, educate them and the rate will drop.

'Instead of this stupid law we should be focusing on rehabilitation'
And PREVENTION. Why is it we want to wait until somebody has committed these three rapes Jeff, how about instead of lowering taxes at the expense of things like EARLY CHILDHOOD EDUCATION, we invest as a society in creating the support people need and often don't get from dysfunctional families. Then we might see a tangible reduction in crime. And for those few who still go out and rape three times, there is perhaps an argument for a hefty sentence. However, what if you commit a couple of stupid drink inspired crimes in your youth, say a fight outside a bar and are convicted of assault, then you steel a car with a few mates, geezers need excitement you see and often make these stupid decisions as 19 year olds. Then many years later, having got your shit together you are involved in a car accident and are found guilty of manslaughter, you're going away for the maximum sentence available. That's not about the extreme example of three rapes but the very real result for people who are admittedly dysfunctional but don't deserve to be tared with the three time rapist brush.

1) the increase in spendnig on childhood education has not increased numbers attending. Further why is it a neccessity to have 100% at a kindergarden, its not. Its a minor cut and frankly its not going to have an ounce of difference on prevention.

Further prevention is not at odds with once you have a scum bag locking them up for a long time.

Finally your last point, only certain crimes meet the three cross, this is not the californian law. For example I am pretty sure theft does not. As for the fight outside the bar, you would most prob be charged with fighting if you were drunk, which again does not meet the critieria for the three strikes.

I am not sure that Bomber is being fair in his attack on the messenger in his florid attempt to discredit the legislation.
Look above Bomber at your posts, and you will see the number of replies to you diminishing because you are so bloody florid and fixed emotionally in your political position.
You appear nearly now to be incapable of proper consideration .

You quote no statistics but Garrett does, and plenty.
Jurisdictions which have taken a low tolerance attitude to crime :
that is zero tolerance, three strikes out, and similar have remarkably reduced crime.

Bomber stop mixing your violent emotions with rhetoric and politics
This is not the California law disaster,
This legislation is only for serious crime, like violence, and rape, and activity which ruins peoples lives.