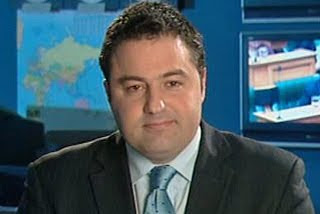 TV3’s Duncan Garner reported last week that Flamboyant Flaming Homosexual pinko Chris Carter was flying to Europe on your taxpayer money probably to spend it all on expensive cocktails and lube.

I don’t want to suggest that Duncan Garner has a ‘thing’ for Chris Carter, but last week Duncan made a big drag queen drama about Chris Carter going to Europe to observe the UK elections and managed to insinuate that Chris’s flamboyant homosexual taxpayer funded lifestyle would be a drain on the National coffers.

Chris Carter is Labour’s foreign affairs spokesperson and only the flight are being paid for, him going to the UK is totally within his brief, did Duncan make any comment on Paula Bennett’s trip to America or John Key’s current trip to Washington? No, no he didn’t, just Chris Carter and his supposed taxpayer funded gay madi gras.

(I think Duncan has a crush on Chris.)
Hat Tip: The Standard

are you saying what I think you are saying???

Well that was bad. I watched the "News" clip which seemed more like a whiny ignoramus homophobic rant then anything newsworthy. But what can we expect from 3 News? Over the past few days i've seen more non stories about golf players and apples then I ever cared to. Also of note was that while 3 News was "bring us the best and most up to date" story about tiger woods' new golf club, the poorly funded Triangle Tv / Stratos news had live footage of the Russian and American presidents talking about the first steps to nuclear non-proliferation. Go figure.

What in the HELL does anyone from this country have to go and observe the UK elections for.

You said it all in one sentence Beepee.

It's not Chris' homosexuality that is getting to people, it's the fact that if there's an overseas trip in the wind, Chris will be there sniffing it out. He seems completely oblivious or just simply doesn't care that people are sick of him having his snout in the trough. Eiher way he is serving absolutely NO pupose being in parliament. Labour party supportesrs should be screaming the most loudest - it is not a good look for the party and definitely not a good look for Phil Goff who is looking like a weak leader by not telling him to pull his head in.
Now I can almost see bomber getting his reply ready - if it's not Chris' homosexuality that is annoying people why is it mentioned in the media? Answer: Because Chris used the 'gay card', saying that people are picking on him because he's a homosexual. Sorry Chris but when you use the 'gay card' you suddenly can't get annoyed that people are commenting that you are a homosexual.
Now Goff, show some leadership and deal with him please!

WTF? Bwahaha. Yet not so long ago The Standard were the ones claiming that Carter was a "DICK".
"I can’t believe you are this f*ucken stupid" was the claim
http://www.thestandard.org.nz/chris-carter-you-dick/