Murray and the Zionist plenipotentiaries 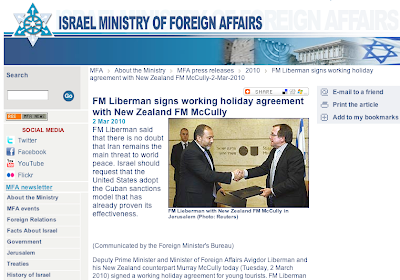 Israel's MFA statement on Muzza's Israel visit. I was going to condemn our Rugby/Foreign Minister for shaking hands with that corrupt Liberman, but most political figures over there (both Israel and their Arab neighbours) seem to be that way inclined so it doesn't seem especially relevant to criticise him for that. Muzza's probably going to communicate amicably and possibly substantively with whichever military stooge is purporting to be Fiji's Foreign Minister at the next international rugby match anyway, so whom he chats with is probably not that relevant either in the scheme of international diplomacy.

What I find wholly unsatisfactory is that the NZ government - the victim of Israeli state terrorist espionage activity in the form of the Mossad passport imbroglio five years ago - is signing up to a working holiday agreement with the Jewish State that will facilitate an exchange that is ripe for exactly the sort of Mossad infiltration that leads to a Dubai-type assassination. The people Israel will send over will be Jewish. The people NZ will send over, and that Israel will accept, will be mainly Jewish. The sort of people that regard it as their patriotic Jewish duty to the Jewish State to misuse other nation's passports and anything else they can get their hands on. And that's not the Israeli-born Jews I'm talking about either, that's NZ Jews as Fran O'Sullivan has explained:

New Zealanders I spoke to on a trip to Israel in 2004 - at the height of our own diplomatic stand-off over the botched attempt by Israeli agents to steal New Zealand identities - said they would be happy to lend their passports to Israel's spy apparatus if requested.
[...]
Former Labour Prime Minister Helen Clark took diplomatic reprisals against Israel after two of its operatives - Uriel Kelman and Eli Cara - were caught out in a clear passport fraud attempt. Israel also gave the Clark Government assurances.

But will they turn out to be worth the paper they were written on? I doubt it.

One question that the British Government might ask - but probably won't dare - is whether its own citizens did lend their identities to Israel in the first place.

As I wrote in September 2004, Israel's security services are long practised in the dubious art of "borrowing" foreign passports from smart, bilingual young Israelis with dual nationality.

A leading Christchurch-born figure on Kibbutz Yizrael (where one of the Kiwis involved in the New Zealand passports theft attempt was said to be hiding out) told me then he would lend the spies his own passport if they wanted it.

Shimon Zelas was quick to add then that he had not done so.

South African-born security analyst Hirsh Goodman said he knew of instances where "friends have had their passports taken for two months, three months and have come back with all sorts of stamps in them".

Goodman believed the spy agency probably ran a passports factory in Israel as well. "Good move by Mossad ... the damage to Israel is primarily in getting caught."

And they will be caught out again, there will be a few months of being miffed, and the Israelis will give the same assurances - and under pressure from America and their own Jewish/Israeli lobbies - the governments of each country who have been taken advantage of will resume full diplomatic relations and act as though nothing has happened. And then the game will start again once one of the Mossad operatives gets caught with their pants down.

Where is this appeasement of Israel - a racial and religious state hell-bent on colonialism and aggression - supposed to end? Is dignifying the Jewish State with recognition and full co-operation going to make them end their illegal occupation of Palestine? Will treating them as a normal country make them tear down their separation wall? End their version of apartheid? Stop them attacking refugee camps and UN schools with phosphorus weapons? Obviously not. It hasn't worked yet has it. All of Joe Biden's fine words I've just been listening to at Tel Aviv University don't amount to anything since the US backs them no matter what - a few remarks chastising them for starting to build 1600 units for Jews in occupied Arab East Jerusalem won't stop them sending military aid to the IDF, it won't stop them having nuclear weapons, it won't stop them starving and strangling Gaza and controlling and raiding into the West Bank.

Normalising this appalling situation by pretending that Israel is anything other than what it is - a religious-based terrorist rogue state that considers itself above every international law - just emboldens them to continue their hostilities.

And now this Tory government have invited them to open a fucking embassy here!

In a government mother-fucking building if this TV3 report is correct.

Do they think that good, decent, conscientious citizens of this country won't attack the outpost of a modern-day apartheid state just because they take a lease inside a building owned by the NZ government?

I would guess it is even more likely to be attacked if the Crown attempts to provide them with accommodation. And the ironic aspect will be that these citizens will actually be acting in the best interests of the government when they attack the embassy because it will be used to do what the Jewish State does everywhere: orchestrate anti-Semitic incidents in order to encourage local Jews to emigrate to Israel (eg. incidents like the unsolved Jewish grave vandalism outbreaks a few years ago) and be a Mossad base for their terrorist and espionage activities (eg. like the passports affair in 2004, and the sorts of kidnappings/renditions/killings that have occurred in other countries).

This government is a disgrace!

National have shown that they support terrorists acts by supporting Israel who feel free to murder at will and to threaten and attack their neighbours!!

Sign me up -sounds like the rent could be nice and cheap! It's nice that John Key is helping us small business operators into good affordable business leases. What a guy.

John Key is the reason for this - he is Jewish himself - although he does not make a big deal of it - at least publicly.

But how else do you think he scored his millions? Not by hard work, or through inventing something, or establishing a business that provides employment for many. No, not in that way.

He simply situated himself where the loot concentrates in the capitalist world order - the banks.

And for someone with his ancestry that would have been a very easy thing to - he would have had plenty of help from his fellow tribesmen.

@ Wayne. No doubt you draw all your conclusions based on, "The Protocols of the Elders of Zion" possibly? Yeah - that's the one! Bad money chasing naughty (blame em' for everything) Jews!

Really Wayne - you really should get back in that sandpit pal.

"Do they think that good, decent, conscientious citizens of this country won't attack the outpost of a modern-day apartheid state just because they take a lease inside a building owned by the NZ government?"

By the way Tim as a Maori nationalist who regards all Pakeha as tools of colonist settler govnt intent on depriving the indigenous peoples of Aoteroa of their rightful inheritence and land, who therefore do you regard as "good, decent, conscientious citizens"?

Anon 4:23pm: As an Anon commenter who keeps presuming to know what I think why do you ask me such rhetorical sorts of questions?

Your mistake - and you do this all the time Anon - is to keep making assertions of facts and conclusions and assumptions as part of your question where they have not been established. The main mistake you make this time round is to assert that every Pakeha is a tool. Since some Pakeha have fought on the Maori side rather than the Crown side in disputes between the two competing forces over the years it would suggest that some Pakeha can be tools of Maori or non-tools.

But since you asked I think I can answer that question anyway by taking your basic question seriously, and answering generically:

Can "tools" of a government be "good, decent, conscientious citizens."

I though that someone like yourself would have considered the consequences of attacking the Israeli embassy. Given that Israeli considers itself a target for terrorist attacks then obviously it would have prepared.

"John Key is the reason for this - he is Jewish himself - although he does not make a big deal of it - at least publicly."

That's right, not publicly. But privately... oh boy. He's like really super-Jewish, and I mean in a BIG way.

How you let Wayne's comment through Moderation, Tim, beggars belief.

(To say nothing of the implication that the Makara cemetery attacks were staged - that's just fucking nuts. But at least it's worded a bit more shrewdly than Wayne's outburst.)