Inspirational and uplifting thoughts for Monday

And it's almost entirely all shit. Both the mainstream news channels and the blogs: pointless shit. 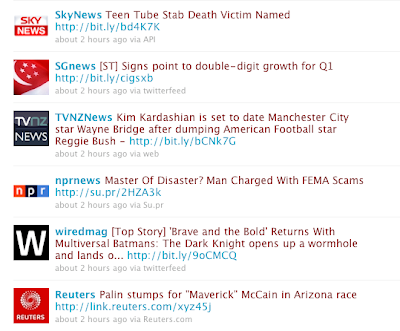 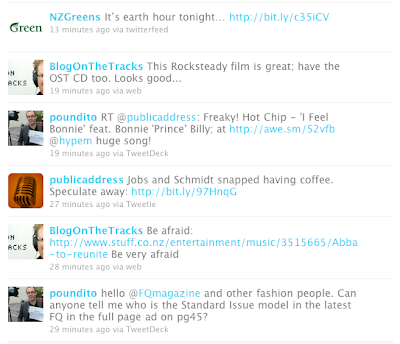 Poorly written, poorly researched, formulaic, tedious fucking shit. The occasional small turds of consequence floating up only to be shat on by endless partisan repetition and pedantic tail chasing. Remarking upon the obvious - something that for any intelligent person never needed an explanation in the first place - is now considered the creme of intellectual discourse.

And we will all sit there - like fucking morons - staring at a fucking monitor, reading and watching and listening to all this fucking shit when we could have been doing something productive. Then we will go home and stare at a bigger monitor and repeat the whole process again with better technical quality. Wasting our precious seconds of existence sieving through this endless swamp of shite as if it were important, and for bloggers at least, as if it made a blind bit of difference - which of course it doesn't - hoping to find something substantial that isn't composed entirely of fecal matter...

...deluding ourselves that because it is in a text format it is at a higher level than the circus of ratings-driven TV, or any more worthy than a talk-hate radio session. We might as well be bodies in pods, suspended in goo, a la The Matrix for all it amounts to.

Shit thats so good I might even steal it

Blimey, it is normally the right wing bloggers who get all "what is the point of it all" angsty. Everything all right over there Tim?

@ BB- of course it is. I'd suggest that unlike many, 24 hours in a day aren;t entirely taken up by this mindless shit.
I just occasionally pop in and out. I'm awaiting that anonymous poster whose entire motivation seems to be to find the worst in people, and wish and will for a crackdown on it. (Not unlike the gubbermint - who once chastised the previous one for nanny state crap, but who now can't believe their good fortune in being able to thrash dpb sluts, the poor, or sny other vulnerable social division).
But even after a Pulla Bent (who disingenuously tries to portray herself as the been there done that, I know how it feels minster of welfare, or the proim minster who did likewise when he was certainly no WROSE of than Joe Average during his childhood), they want to dish it, but cry quelle horreur when they get it back.
Not unlike the Merican hard right - many in this admin should remind themselves of their participation in trying to portray a Helen as a doik, incapable of having chillun, corrupt, and any number of other labels designed to denigrate.
Sauce for the goose is sauce for the gandar.
And what a ghastly gandar she is.
OI no wot its loik. Oi been there. Oi been on the dpboi. (And while I was I claimed every last little addon there was running at the toim - especially those oim now trying to claw beck).
I urge all to go back and actually look and analyse the last Q+A.
For me she tried to come across as fluent with some degree of intelljunce. OK...not too much better or worse than a number of others. But while you watch and listen - the number of "ebbslootlees" and "Certinless" that could have given her the credibility of a treasurer of master in control was matched equally by the number of "sort ofs" - AND NONE of it adequately answered that put to her.
And if that isn't enough - consider JUST who was putting it to her.
Fuck me - what a bugger's muddle!.
Still.....IF that's what NZers want, more fucking fool them!

Steady ... you make an impression and you make a change. Don't use The Matrix to beat yourself up ..look what happened there..

fuck thats depressing but so true...in the end everything passes away, everything is ephemeral, and even Chairman Mao said in a 1000 years, Marx Lenin and himself would be forgotten or at least considered quite ridiculous.

What about a blog then? Well its only value is to piss other people off, to fuck with peoples minds - that's why I write mine...but really it is a complete waste of time.

Get rich Tim, thats all that really fucken matters...coz in the end that is what will secure the poontang long term..and with poontang you make kids, the richer you are you can afford more kids - the more kids is directly proportional to the expected number of generations your line will continue to replicate itself beyond your own personal extinction ---at least those tadpoles with a bit of you in them get to swim round for a bit longer... but in the end it will all peter out anyway.

Horrific thing is if there is an afterlife - that would be the fucken worst. But in a way there is, coz the as of yet unborn still need to be seeded with souls...so that is fucken horrific, a really scary lottery. I drew the long straw this time round in terms of looks and intelligence, but next time round there are obviously no guarantees.

Therefore Tim, even Maori sovereignty, anti imperialism, the revolution ....they may in the end not matter...you may come back in the next life as a Pakeha, and then you will be on the other side.

guys, guys - its all about context. if you wanna be all philosophical about it then enjoy your misanthropy. But we all need to live in the right here, right now watching the world wake up from history - amirite?