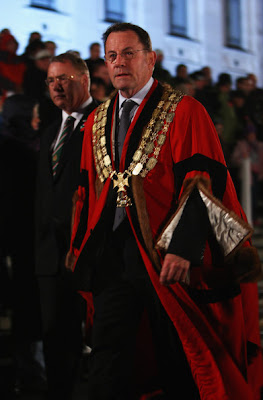 Can I be your No2, Tamihere asks Banks
Auckland City Mayor John Banks' campaign team is distancing itself from suggestions of an unusual alliance with former Labour Cabinet minister John Tamihere if Mr Banks wins the mayoral race. Mr Tamihere's team had sounded out Mr Banks' team on the prospects of Mr Tamihere becoming deputy mayor of the new Super City if Mr Banks got the top job, TV3 reported last night.

If Tamihere teamed up with Banks, it could be goodbye Len - that would be a partnership that could reach out to the right wing and the really right wing. If Bill Ralston hasn't fallen asleep at the wheel of running Banksies campaign, he'll be meeting Matt McCarten, Matthew Hooton and Willie Jackson pronto. Team JT and Team JB would need to convince the left that the enemy is Wellington and a 'unified' Left/Right ticket is needed to defeat Rodney Hide's more unpalatable aspects of the Auckland SuperCity. Problem is Tamihere has a lousy record of working within the 'left' and Willie and Matt will be damned to purgatory for the rest of their lives if they deny a decent bloke like Len a shot at the Mayoralty by unleashing John Banks upon Auckland with no tangible results.

For Banks the offer is almost too good to refuse, if he turns it down it confirms suspicions that Banks has his own agenda and those won't be slowing the plans of Hide and Joyce down. Lens team need to be thinking about offering Tamihere the same offer, they'll be annoyed they weren't spoken to first, but if they want to win they'll need to look beyond that, if Tamihere won't play ball, Len Browns Team need to take the idea up elsewhere and find Len a running mate - how about Judy Bailey as Len Browns running mate?

Why not Ollie Olson? Surely he's got more credibility than Ewen Gimore.

You mean Brown and Williams don't you. At least those two are not a pairing of rightwing pimp and whore.

I would rather see Len brown team up with Sue Bradford. That would ensure a Banksie win more than any other scenario.
I can see the billboards now.
A picture of Bradford gurning into the camera with the caption. "Vote Len Brown and Bradford will be one heartbeat from the mayoralty."

Wow what a combo...banks and tamihere...........that Tamahere, is just another homophobic, sexist idiot....so he will fit right in with banks.

Who would seriously countenance Tamahere as a mayor if the actual mayor fell over for any particular reason.