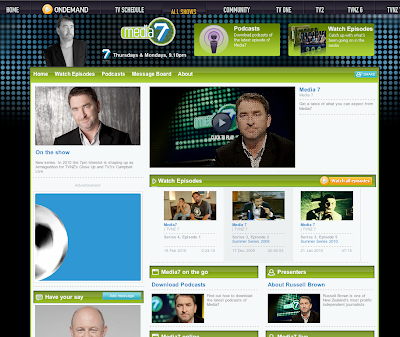 There's an awful lot of cliquey wank geekery in this country. Russell Brown seems to be half of it all by himself. It's not just the Auckland-centric yap heads he hosts on the ever shorter (15 minutes now isn't it? - the more times his mug's on the web page the shorter his show seems to get) "Media 7," or his Public Address blogging community; it's everything.

One week it's "foo", the next it's "webstock" and then "ONYA" (which all appear to be incarnations of the same group - see below). To the curious outsider - who might otherwise have taken an interest - it all looks a bit wanky. OK, a lot wanky. Smug wanky too - Finlay MacDonald wanky. Yip - that wanky.

A coasting, dry, methodical, entropic wanky trying to be the edgy, free-form wanky it would be if the said wankers weren't all at varying stages of middle age. But having said that at least Russell Brown's show is not the sell-out, dumbed-down form of smug wankiness of the unwatchable and pointless type... like "The Ad Show" that follows "Media 7" with whom they seem to have split the time slot. It is literally unwatchable. It makes Media 7 look like a forum of Nobel laureates by comparison. It's so much pap I'm actually unsure whether there is enough intelligent content there to even be called wanky. It's certainly smug though - the smirk on the presenter's face never left - for even a moment, that I could stand to watch. Maybe it is worse than that? Maybe the unseen portion was even worse? Probably was. Don't care to find out though - wouldn't try viewing that again. I would actually have to be paid to watch it... and even then, so easy to drift off during the ads and the talking to the people who made the ads about how wonderful their ads were and about how much it means to New Zealanders... and the brands... and discussing rates cards... so exciting. So the boring bits - they were a bit wanky I suppose: esoteric information that no-one needed or wanted to know... like a half of a unit standard of whatever the hell "media studies" is at secondary schools these days - one of the parts that you can skip... that part was wanky. As for the rest: at the rate it was going - vox pops, staged micro-interaction with the as-live studio audience and so on - maybe it was worse than what I'm making out. For those who care, "The Ad Show" makes at least three fatal mistakes:
1. The only commercial advertising on a non-commercial channel: we don't want to watch fucking ads - that was the point of these channels (6&7). If we wanted that we'd be better off watching Jasper Carrot or Jimmy Carr host it - seriously - at least their analysis was humourous and to the point. Since it wasn't entertaining, or informative all we are left with as the point-of-difference on that channel is it is plagued by bloody ads.
2. It's a populist format: (vox pops, keeping it busy, short i/v's etc.) on a channel that is supposed to be the exact opposite of that. It's TV2 lite stuff for what is meant to be TVNZ7, ie. HEAVY DUTY public broadcasting. So it's a populist, tabloid infotainment type of format, but:
3. It's so fucking shallow. They had an entire discussion about the Rugby World Cup advertising/sponsorship black zones that the government legislated for the corporates and no mention of the human rights/freedom aspect of that restriction. I think that was the moment I tuned out.

If you skipped the last paragraph because it was too long:
The Ad Show on TVNZ7 is shit.

It's so fucking awful and ill considered even the website for it within TVNZ goes straight to ads before you can stop it (and jams up my computer so I won't link to it). Well, that's commercial advertising: obnoxious, annoying and to be avoided if at all possible. It's unwatchable and unlinkable. Gawdawful.

But enough of poisoning my relationship with Simon Pound; I don't want to overlook Russell Brown's last post which is something of a case study in how breezily seamless and uncritically unconscious the nexus of the media/geek/tech brotherhood can be:

"Real credibility" eh? Where do we start? Outing the conflicts of interests and the non-disclosures rampant within the brotherhood might be a good place, but I'll start by remarking on the competency of whatever ONYA is - it's Monday afternoon and they still haven't posted the winners from last week's convocation.

Let's begin with Radio NZ. They are pulling out of awards - just as they have pulled out of the ratings - because it costs too much for them to participate and it's not important enough to them given their priorities (like just surviving under a National government). So given there were only three finalists listed in categories and given that it costs $150 a person/$1250 per table I wonder if anyone was there to pick it up in person? Hmmmm. "Modest resources." I hope they weren't there, but I doubt it.

No need to note also that three of the finalist nominees were from Springload - and that Springload was one of the ONYA sponsors. No need to point out either that most, if not all, of the nominations are... yeah - take this one:

Best visual design nominee: NZ International Arts Festival. Go to the page and tell me where it's being held? 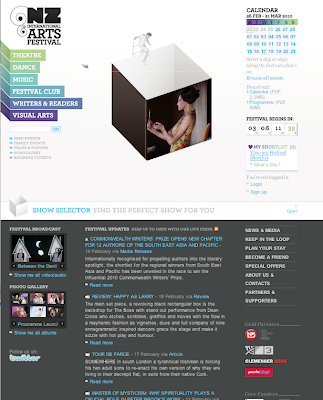 There's a hint - but it's tiny, right at the end there in amongst the sponsors. 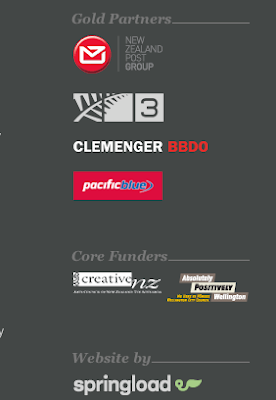 That's right - it's the Wellington festival of arts - but the superb design skills being recognised by the industry must relate to how well they can hide this fact. Design FAIL 101. The judge's comment however: "essentially functional." If its brief was "Shhh, don't mention it's in Wellington FFS" then by all means - highly functional. You have to bury down into the media releases and so on before you will get to that key piece of information: it is being held in Wellington. You would never know it from the front page. Sure, it's a bit wanky, but that doesn't automatically mean it's Wellington.

If I was on the Wellington City Council I would be mightily fucked off with whoever designed it. But that's not how these awards work is it. Is it.

Cliquey covens and corporate sponsorships don't make for "real credibility." The ones forking out over a grand a table are the ones who are allowed to pat themselves on the back here - it's all paid for isn't it. Isn't it. Yeah - that's the way it works in the real world. It seems that most of the people who should be raising these issues are all part of the interdependent communities of media whores and their corporate pimp masters. They have their incomes and careers beholden to the media gatekeepers, beholden to their advertisers, beholden to their funding bodies and the people who appoint those bodies - and so certain questions will never be asked, certain people will never be heard and certain things will never be said.

Tight collegial circles of creatives and media professionals, working with - and fundamentally compromised by - the overlapping classes of management, determine what shape public discourse takes in this country. That is why it's all remarkably similar: the same story formulae, the same agenda, the same meta-assumptions of race, class and gender, the same timing, the same characters, the same talking heads, the same old shite over and over again: the midday news on the TV and radio networks are carbon copies of each other - ditto the six o'clock news. The most likely phenomena with the potential to break that head-lock is the blogosphere. Despite the fact that most bloggers are wholly or partly entrenched in the aforementioned brotherhood a blog is a genre of publication that encourages a greater level of honesty than the traditional means of transmitting ideas, and if I am a little hard on bloggers it is because they are being held to a higher standard on account of their relative importance in a country dominated by corporate media.

OK, I shall now watch what Russell says is:

an edit of the closing show. That's me testifying at the beginning: 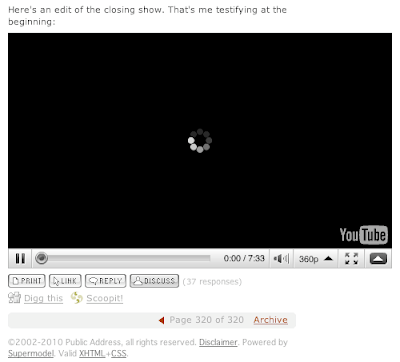 Oh you do come across as a prize bitch Tim.
You have nothing nice to say about anybody or anything.
Your life is that devoid of meaning, you have resorted to tv reviewing and public transport commentator.

Tumeke, the blog of envy.

Now this is way off topic, but I remember reading a coruscating Selwyn post recently on the crap websites run by our public transport 'providers'. I've just been on Maxx: I tapped in that I wanted to go from Beresford St West in the city to Henderson Valley Rd in Henderson.

The cretinous Maxximus has just spat out directions from ANZ St Heliers to 666 Great South Rd.

Why the fuck should taxpayers fork out for a self-congradulatory circle jerk tim?

I don't care if its 'only' $150 per seat the benfit is private therefore individuals should pay.

O, beware my lord, of jealousy;
It is the green-eyed monster which doth mock,
The meat it feeds on...

...or, the Onyas could be a bunch of people celebrating some of the awesome work being done in the NZ web space.

But where's the source of traffic in saying that eh?

(I haven't watched the Ad Show, so couldn't comment).

"O, beware my lord, of jealousy;
It is the green-eyed monster which doth mock,
The meat it feeds on..."

Are you referring to murderous left wing envy?

I don't even have a TV so couldn't comment less about the ad show but I WAS at Webstock and the Onyas and, despite the non disclosure you allege and apparent cliquey nature of the event, I believe they were both aspirational and inspirational events...

But anyway - I have to commend you on your post, lovely use of masturbatory and intercoursal colloquialisms, excellent attempt to, in one go, alienate the entire NZ web, design and media community and pretty much a copybook example of trolling for page views.... and to think I was fearful that I'd gone to far calling one session at Webstock crap.... I'm a lightweight in comparison to your vitriol....

There's cliquey wankery in every industry. Why single out this one? Upset because your internet connection is incompetant at loading Youtube videos?