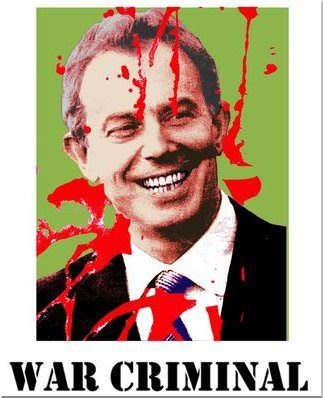 Remember the National Party in Parliament in the build up to this war demanding that NZ join in the pack rape Bush & Blair were about to commit on Iraq based on a pack of lies because that’s what allies and mates did?

Yes, I often join my allies and mates in events that are clearly wrong and ill thought out, those young Nat party’s must have one hell of an initiation ceremony.

I have been against this frightened, angry, corruption of reason exploited by the usual war mongers and corporate arms dealers from the moment Iraq was ridiculously connected by the Fox News propaganda machine to September 11, so I was very interested in watching Tony Blair having to explain his rational for this Iraqi nightmare that has killed anywhere between 100 000 and million Iraqis (we aren’t sure because we don’t count them when they die).

So what was Blair’s main argument, that he believed beyond doubt Saddam had the WMDs and that Saddam’s co-operation wasn’t full and frank with the inspectors which meant he was hiding something and in the post 9/11 risk analysis he had to make the decision.

As we now know, Saddam’s lack of co-operation had nothing to do with hiding WMD’s he was desperately trying to hide the fact HE DIDN’T have WMD’s, so frightened was he by Iraq’s neighbors who may move against him if he was found not to have the much vaunted WMD’s. The fact that Blair didn’t at any time consider that to be the real reason rather than Saddam hiding WMDs doesn’t excuse the invasion or his decision, and using the panic caused by the back drop of September 11 to argue that a new threat equation had been reached doesn’t once again justify his half baked assumptions, it only suggests he was not the leader he should have been and was caught up in the panic as well.

His pathetic attempt to justify his position is farcical, I don’t care how much he bloody well ‘believed’ that what he was doing was the right thing, he was wrong, and the fact that he tried to use the inquiry as a platform to argue for a possible invasion of Iran is just another example of how self righteous and delusional this man is.

Put the prick up on war crimes.

I watched almost an hour of the testimony early this morning (before the tea break) on the BBC's one minute delay coverage - and it was the old glib Tony Blair slipping and sliding around the truth like he was still PM. The devout Christian - so devout he changed religions after exiting No. 10 - looked pained and pensive during the dialogue, resorting to combative bluster and re-stating the simplistic and incoherent one-liner soundbites over and over again at every opportunity.

As you say it is the logic that condemns him more than anything else and Sir Lawrence's questioning brought that to the fore. At several points Blair had to concede that his course of action was limited to what he had promised the Americans, but never conceded that he had broken commitments to the people of the UK to do all he could to avoid war. He said he and Hans Blix had worked together on a resolution, but the US didn't care as they were going to start a war regardless, and Tony... he didn't really have an answer... he just went along with what they wanted: fuck the UN process, fuck the evidence, fuck the legality and fuck the British left which Tony Blair's party supposedly represented - in order to fuck Saddam and fuck Iraq.

At the time (late 2002) I - and many others - assumed that Blair being so tightly on Bush's side would bring the US back to the UN and that the inspections would run their course and when Blix and his team made a final report in mid or late 2003, or whenever, there would be enough evidence either way to confirm or reject the rather wild assertions being made by Washington. If the UK did not go along with it then the US would not invade.

In retrospect perhaps we were as naive as Blair was in the early days, but Blair had crucially given Bush the assurance the UK would be in on an unconditional basis - something he could not concede to the inquiry but is self-evident from the events. He gave Bush a blank cheque - and he cashed it. Blair went almost totally grey-haired over the next couple of years as the death toll mounted and things didn't go how the US said it would. He can't publicly say he regretted it, any more than Nixon could say he regretted Watergate, or Reagan regretted the Contra scandal, but the consequences of an unsanctioned war certainly had an impact of conscience upon him I am sure.

When Colin Powell changed his tune later in the piece it was all down hill and Blair had put UK troops on the ground in a classic ultimatum and invasion situation in which his options were curtailed. Sir Lawrence tried to get some answers out of him on this aspect and none were satisfactory. Scrambling around for a second UN resolution when the US had said they would invade only bought a rain-day window of a fortnight at most (Blair seemed to say as much). Blair had already committed the use of British blood and iron privately to the Americans but could not bring himself to tell his own people that fact - that's what it comes down to.

Seeing the man thrashing about and using his calculated gestures in front of the inquiry to justify his brand of arrogance and misguided sense of destiny was as enthralling as it was macabre: compelling viewing.

Any assessment of Tony Blair's decision to go to war in Iraq should include the following...
- Saddam had IN THE RECENT PAST used WMD in the gassing of the kurds. The intelligence on whether he still had them was at best muddled (the french believed he did). Yellow cake WAS found in significant quantities after the Invasion.
- at the time thousands of Iraqis were dying due to sanctions (more died than in the invasion and occupation)
- Iraq was quite probabley destined to implode anyway. What held it together was the Baathist regime which had no appointed successor (Saddam had removed all ambitious types around him).It is debatable whether the regime could continue much longer ( the economy for example was almost in ruins)
- Saddam DID support terrorists.For example he paid a bounty to the families of Palestinian suicide bombers.
- the strategic/economic aims of the war. To set up a pro-western,prosperous democratic nation in the middle east that would be a bulwark/example to the other nations of the middle East.Time will tell on this one.
Add to this the inherent evil of Saddams regime (the torture, repression etc) and one can understand the decision to wage war. Whether it was the right decision is another question...

There are many to choose from but one of my favourite examples of Tony Blair's mendacity is this one:
http://news.bbc.co.uk/today/hi/today/newsid_7823000/7823746.stm\

"The only verified Kurdish civilian deaths from chemical weapons occurred in the Iraqi village of Halabja, near the Iran border, are several hundred people who died from gas poisoning in mid-March 1988. Iran overran the village and its small Iraqi garrison on 15 March 1988. The gassing took place on 16 March and onwards; who is then responsible for the deaths - Iran or Iraq - and how large was the death toll knowing the Iranian army was in Halabja but never reported any deaths by chemicals?

The best evidence to answer this is a 1990 report by the Strategic Studies Institute of the US Army War College. It concluded that Iran, not Iraq, was the culprit in Halabja. While the War College report acknowledges that Iraq used mustard gas during the Halabja hostilities, it notes that mustard gas is an incapacitating, rather than a killing agent, with a fatality rate of only 2%, so that it could not have killed the hundreds of known dead, much less the thousands of dead claimed by Human Rights Watch. "

Here's one you forgot Peter:

"Assistant Secretary of Defense Paul_Wolfowitz Paul Wolfowitz, said by some to be the architect of America's war on Iraq, reportedly suspects that Saddam Hussein played a significant role in the three worst terrorist attacks ever on the U.S. - the Sept. 11 attacks on the World Trade Center and Pentagon, the 1995 Oklahoma City bombing and the 1993 World Trade Center bombing.

Discussing his soon-to-be-released Vanity Fair interview with the top Pentagon official, Sam Tanenhaus told WABC Radio's Monica Crowley on Saturday: "Wolfowitz states that there's a very strong connection, he's convinced, between Saddam and the first World Trade Center bombing in 1993. This is a very controversial idea and yet Wolfowitz embraces it and has for quite some time."

The Vanity Fair writer added, "Also I was told by a source very close to him that Wolfowitz entertains the possibility that Saddam was involved in the Oklahoma City bombing in 1995."

Yellow cake was not "found" as you put it:

"U.N. inspectors had documented and safeguarded the yellowcake, which had been stored in aging drums and containers since before the 1991 Persian Gulf War."

The only truth as to why Iraq was illegally invaded and remains illegally occupied came by accident when the military marketing department initially branded the exercise Operation Iraqi Freedom - OIL for short.

A Strategy for Israel in the Nineteen Eighties by Israeli Foreign Affairs strategist Oded Yinon offers an alternative.

Published (in Hebrew) in February 1982, the paper is either the genesis of the strategy we see working out today or it is remarkably prescient:

"Iraq, rich in oil on the one hand and internally torn on the other, is guaranteed as a candidate for Israel’s targets. Its dissolution is even more important for us than that of Syria. Iraq is stronger than Syria. In the short run it is Iraqi power which constitutes the greatest threat to Israel. An Iraqi-Iranian war will tear Iraq apart and cause its downfall at home even before it is able to organize a struggle on a wide front against us. Every kind of inter-Arab confrontation will assist us in the short run and will shorten the way to the more important aim of breaking up Iraq into denominations as in Syria and in Lebanon. In Iraq, a division into provinces along ethnic/religious lines as in Syria during Ottoman times is possible.

Chances of America holding military training exercises on dealing with planes crashing into buildings on the morning of Sept 11 2001 and it actually occurring for real that day?

Chances of England holding military training exercises on dealing with bombs exploding on subways and buses on the morning of July 7 2005 and it actually occurring for real that day?

Chances of the above both occurring? Almost nil.

Yet that's exactly how it went down, look it up (most peoples brains will filter this information and dismiss it).

Blair will burn in hell for his crimes against the earth. He will pay for all their lives.