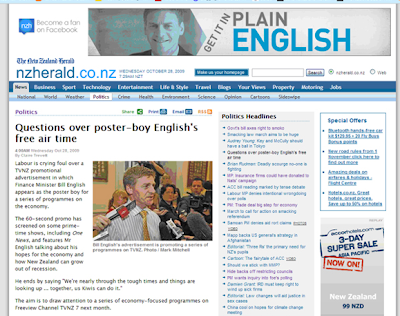 So now TVNZ is promoting the Deputy PM on other media too! It's astounding - astoundingly poor editorial judgement. I heard the pathetic and unconvincing defence of this promo from the head of TVNZ digital on RNZ this morning and it just does not wash. He's made an error - either he's had a lapse in judgement or he's cynically flattering English in a hope that he - as the ultimate overseer of TVNZ - doesn't slash it. Coleman, the under-performing Broadcasting Minister, has already started the erosion process by ordering the only unique Freeview channels (TVNZ6 and 7) onto Sky.

When I talked to Eric Kearley, the head of digital at their launch he described this scenario (now come to pass) of losing the content to Sky as a "slow suicide" for the two channels; but what he's done in commissioning this partisan promo for his master is to swallow another handful of pills and hope it will counteract whatever poison they've been forced to swallow by the Nats. It's not going to work, it's just made it worse because the one thing a state broadcaster must trade on is its integrity and political neutrality - and that's gone now.

The arrogance and contempt spewing out of TVNZ is an insult to viewers. Try not to gag when you read this miserable, risible, defence from their resident spin doctor: 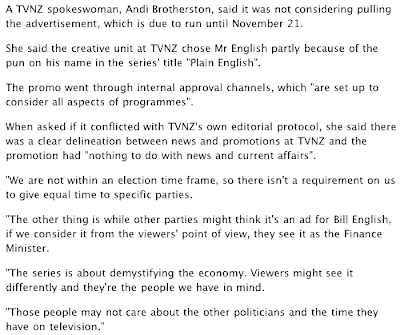 It looks like they have spent so much money on the campaign - and it is a campaign - that they don't want to take the hit and they don't want to risk upsetting their political overlords. To preserve their integrity as a state broadcaster they have to pull these promos. Every hour that goes by and they keep pumping out free campaign ads for the Deputy PM and his government is another rung down the ladder of credibility for TVNZ. --]

Tonight the Bill English promos were playing on all the bloody TVNZ channels - not just the digital ones. It is an outrage and every hour that goes by without it being pulled is further damaging the credibility of TVNZ.

The management and staff are so degraded now in their editorial sensibilities that they don't understand that having the Deputy PM speak direct to camera (uninterrupted by narration) in the form of a promotional video for himself and the government is wrong. It is totally contrary to the normal standards of impartiality that are expected of a State broadcaster. 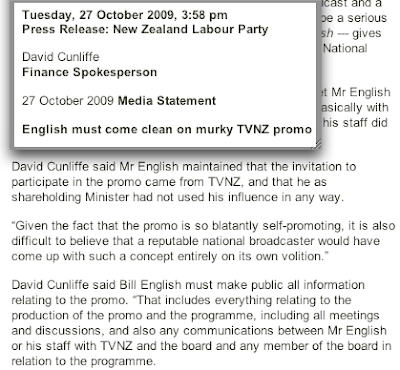 Maybe Cunliffe's also a bit miffed he wasn't getting some free propaganda too - and who can blame him? He has every right to complain and so have the viewers - because there's no counter-balance with these promos. It's not framed in a context of political competition of ideas between parties it's a straight out hyping of Bill English and the government - and all shot in a style that focuses on portraying him as a kind of technocratic economic guru - like Tony Robbins meets Lee Kwan Yew. It's a government promotion and it is completely unacceptable.

I can understand that the TVNZ staff responsible may have produced something they thought was stylish and slick without thinking about the partisanship, but now it's been running for a few days I would have thought that at least the guy who is getting paid close to a million a year to run the show would have realised the problem. This is such poor leadership and such poor editorial judgement. The promo must be pulled immediately.

And not one of them can see that this is wrong?

Their story on the English-promo saga, and guess what was in the advertising space above...

Left a tel. message for Eric Kearley asking what Russell Brown and Wallace Chapman - the "stars" of TVNZ7 -think about promoting Bill English.