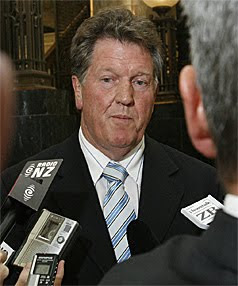 Labour MP rescinds false-names advice
Senior Labour MP Rick Barker says Labour will tell its pollsters to use their own names in future, after it was revealed that he told volunteers to use false names. But he appeared to defend the use of a company front-name, not associated with the party, as a better way to get reliable data. Mr Barker told reporters yesterday that he had not intended to deceive, and the suggestion to use false names was aimed at making the pollsters feel more comfortable. He had not used one himself, but had told workers: "for example, I could be Bill".

Why the bloody hell is the former Minister of Toupees in the media? Whenever Rik Barker’s name pops up I start sweating, what’s he done and why is he doing it I immediately ask.

I don’t know if you’ve noticed Labour, but the mainstream media are SOOOOOO biased against you at the moment anything you do will be greeted by them like a fart in a church. Look at those shocking TVNZ 7 promo’s for Bill English or the fact that the msm don’t even point out the Government’s abuse of democracy by misusing urgency to ram legislation through. Is it a double standard, Christ yes, but that’s the way it is, you need to start relying on creating your own on-line media and not rely on the msm for anything! Sorry I digress, let’s get back into giving you the boot.

This should’ve been a non-story! I appreciate that Labour is broke and that Barker running the polling out of his office was probably the cheaper option, but you have to do it properly, yes people are going to be more honest in a poll if they think the information is going via a 3rd party, but that’s no defence for creating that illusion for cheaper purposes. Knowing the msm is going to be as fair and balanced as Fox News, you have to be much better than this, can I just remind you where the attack should be? That rather than fucking around having to explain secret names and Poll companies that don’t exist and the criticism this opens you up to, The Nats are screwing over the country, let’s just remind ourselves what we are fighting against here…


-Vast erosions of your civil liberties with the Police, The Pork Industry, The Meat Board, and bloody Dog Control Officers with the power to break into your home and spy on us WITHOUT a warrant!
-Privatize ACC pretending there is a crises
-Abusing sexual abuse victims by forcing them to be diagnosed as mentally ill before they can get access to counselling
-recreating class stratification with sirs and dames on top and dirty bennies on the bottom.
-Planning to mine in conservation land and watch those ‘billions’ being sucked away to overseas trans national mining companies leaving us with crumbs as payment.
-bennie bashing anytime the media needs a distraction
-holding ‘consultation’ on Climate Change when they already had made up their mind.
-Holding ‘consultation’ meetings for Maori seats on the Auckland Super City when they already had made up their mind.
-subsidizing their big polluter mates by 55% up until 2050, the ice caps will melt before National stop protecting their big polluter mates
-a weak emission target that doesn’t do a bloody thing
-allowing the Dairy industry to set the new water standards for the country (seeing as they are one of the biggest polluters this is a joke)
-opening the country up for more foreign ownership
-privatizing NZ citizenship to millionaires (wonder which party they will vote for)
-taking the independence away from the Overseas Aid agency so McCully can make a buck out of it
-Sending NZ back to war in Afghanistan
-throwing the privacy laws and cabinet manual out the window to attack beneficiaries who complain about cut backs in training allowances.
-gutting the Adult Education programmes by a staggering 80% which will lead to massive community isolation.
-giving the private education industry $35 million while public schools suffer
-Annexing Auckland with a misuse of urgency and Rodney gets to appoint his mates to run the city.
-Denying Maori representation on Auckland Super City
-Government Departments no longer responsible for their carbon footprint
-canning physical activity programmes for children
-taking sports money off poor schools to give to rich schools
-live sheep exports
-Privatization of prisons EVEN THOUGH the head of Private Prisons from GEO told us at a select committee that private prisons WON’T be cheaper!
-creation of rape pen shipping container prison cells
-Giving the Police power to take your DNA based on mere arrest of a crime with no judicial oversight.
-Giving Police massive new unchecked powers and wiping out evidential thresholds to seize your assets
-a 9day fortnight that actually ends up costing workers
-preparing TVNZ for privatization
-10% employment cuts in the public sector when caps were promised as opposed to (knee)caps.
-dismantling pay equity for 46% of the working population because to National women don't matter as much as slashing wage costs
-90 day right to sack in an unemployment environment that ranges from 7% to 14%
-Borrowing for the Tax cut that favoured the rich
-Junk food back into schools
-The molestation of the select committee process with a misuse of urgency that you would need to go back to 1998 to find a comparison.
-Truancy fines raised to $3000
-$35 million on military boot camps that don’t work but make middle class voters feel smug (this amount has increased btw)
-Gutting the RMA pretending it’s cutting red tape when really it’s burning Green tape
-Dismantling the ETS and holding a right wing inquisition into the ‘science’ of global warming
-Medieval law and order policy pushed through by a right wing homophobic drunk who now wants to meddle with the NZ Bill of Rights so his $30 billion 3 strikes and you’re locked up forever raw meat law can pass

Advice for Rick on running Polls:

1: If you have to save money, do polling the way National does it, directly through Kiwiblogh
2: NEVER appoint Green Party members to do anything! They are too ethical!
3: For crying out loud, put your bloody hand in your bloody pocket and make sure you buy the researchers pizza and a couple of beers so that they all aren’t grumbling away later on bitching about the secrecy thing until one of them (always a Green Party person) say’s, ‘Yeah, I’m gonna tell someone’.
4: If Rick Barker turns up in the News you know you have failed.

2: NEVER appoint Green Party members to do anything! They are too ethical!
3: For crying out loud, put your bloody hand in your bloody pocket and make sure you buy the researchers pizza and a couple of beers so that they all aren’t grumbling away later on bitching about the secrecy thing until one of them (always a Green Party person) say’s, ‘Yeah, I’m gonna tell someone’.

That should read: Green party members are a bunch of whiney little narks who will run off and tell teacher on you if they don't get their way. Stands to reason cause those commies can't help but sopy and inform on other people.

National are fucking up more in Govt than they did in 9 years of opposition and what do the Greens do? Oh yeah, they split their own party up and cause headaches for Labour. Further evidence, as if any more were needed, of why the greens will NEVER have any real power in NZ