Dow Jones down 252: 80 years later managed capitalism is in a crises of legitimacy


At 1pm on October 24th 1929, the vice president of the New York Stock Exchange, Richard Whitney marched onto the stock exchange floor after a morning of devastating losses and purchased well over the sale price in front of everyone $20million dollars worth of US. Steel stock. He then went on to purchase General Electric, AT&T and other blue chip stocks spending $130million. His move funded by the wealthiest elites at the time was an attempt to insert confidence into a financial system on the verge of collapse. It worked. Until Monday 28th of October, four days later. 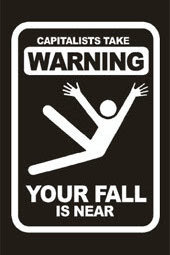 80 years and one week later, Keynesian managed capitalism post Bretton Woods is on the verge of collapse because of the neo liberal deregulation free market virus that has infected much of the international financial hegemony. This collapse isn't just the boom bust of dynamic capitalism, it is a challenge to the legitimacy of capitalism in the exact same way the Great Depression was a challenge to the legitimacy of capitalism. The social destruction these crashes cause in terms of mass unemployment make large numbers of people disillusioned with the system, it was from this social malaise that Capitalism was forced to adopt a welfare state in order to avoid citizens rioting in the street and becoming tempted away by communism or fascism.

As times get much harsher economically, watch for the rise of fascists in western society and mass radicalization of the poor as the billion dollar bonus payouts create a level of class hatred Osama Bin Laden would've been jealous of.

Our delusion that we are past the recession (Key scores top marks for crisis plan)is just that, a delusion. We saw the exact same false dawns post the 1929 crash before the social damage caused was fully felt 4 years later in 1934 with 25% of Americans unemployed. It took a world war to get out of that Depression.

Consumer capitalist culture of plasma TVs, SUVs and cosmetic surgery all paid for on credit cards was never sustainable economically or environmentally. We are in such denial about issues , we have moved to ignoring them now...

Sick of being told how we're all killing the planet?
A survey has found New Zealanders are suffering "green fatigue" through constant warnings of an approaching environmental armageddon.

...if you aren't guilty, you haven't been paying attention.

Its true, its sore, it hurts.
Better go self medicate on a bottle of whiskey. And divert my attention by watching reality TV.

Bring back the social credits.

Yes but the issue is what to replace it with. Socialism has been proven to be even more bankrupt and an even greater disaster. I'd say people will stay with capitalism because no other mode of production has had the capacity to produce so much wealth.

Anon you are right and I don't think a liberal progressive democracy can generate the wealth necessary for the social infrastructure it requires without using capitalism as the engine that drives the economy, BUT and here's the but - managed capitalism has to be that, managed. This free market nonesense that allowed the elite to screw the rest of us has to be removed as the dogma that it has become.

Germany, France and Japan operate on a separate economic corporatist model. They however have their own issues such as deep high level political corruption, closed labour markets, economies dominated by monopolistic state companies and passive unions. Their system of managed capitalism has broken down too. It was just a matter of time.

Oh so what we call capitalism is not really free market capitalism. Of course how can the state bail out the market. So is it bosses' socialism? Hell no, you can't have socialism for the few over the many..
So what was wrong with so-called "socialism"? It wasnt really, it failed as bomber says it was too much of a threat, so the capitalists ganged up on the Soviets and turned them into Stalinist dictatorships and then waited until the workers were driven back to capitalism.
Lets make socialism work next time. Socialise the trillions of workers wages pumped into the banks and lets see how the economy takes off.

"So what was wrong with so-called "socialism"? It wasnt really, it failed as bomber says it was too much of a threat"

Why are there tens of thousands of people willing to risk their lives to get out of Cuba which is admittedly one of the least authoriterian socialist states with a universal healthcare system and into the US? Says it all really.

How is that change feeling now?

Why ASEAN is fucking Gutless!

We must not let our nasty neighbours tell us what to do and how to think or we are all fucking doomed!

They have been complicit in both my for a decade and for another opposition leaders for double that detention or home d or house arrest.

We must find the requisite courage to speak out against these turkeys!

Obama is getting his little pale lapdogs to do all the leg-work!

Clinton and Kerry seem to have lost track of how to decapitate the leaders of the insurgency worldwide.Where are they hiding they ask in vain?

Couldn't get the troop increase past Karzai so hey presto he is gone-burger.

As for the triumvirate of Bush, Blair and Howard.Some might say that the bombs in Peshawars markets and Iraq are just tough luck for shoppers going about the daily grind.

I say otherwise.In fact, the general under their command in this war of terrors removal Musharraf could be a fatal error of judgment.

The boat with the family of 30 cue jumpers for 2 boys ofF the boat each, as scans of lorries reveal hidden bodies in the chunnel.Clumsy was used to decry the language by Howard against overwhelming asian immigration plans like apartments next to railway stations being built for mass transit like potential white elephants after the extra 60,000 fiasco we can't meet at the world cup.

The indigenous-ethnic-indo-fijians kids are sitting next to me in the library.Will they be stuck doing long hours in the self-employed cash based society of small shops and family businesses.

WHY DIDN'T ANYONE ELSE THINK OF THAT?

"Couldn't get the troop increase past Karzai/Abdullah/abdullah so hey presto he is gone-burger!"
DA AFGHANS R WORKIN TOGETHA LIKE TAG TEAM WRESTLING.FIRST ROUND AND SECOND TO THE 2 PRESIDENTIAL CANDIDATES.THEY REALLY PULLED THE WOOL OVA THEIR EYES, CLINTON AND KERRY IT WOULD SEEM.Mister obama awaits them in the corridors of power where it would transpire dat the quest for ultimate say so demands that the consequences remain all too apparent for the time bein or so it would seem...Some might say that the bombs in Peshawars markets (100)and Iraq 160 dead and where is the outcry I wonda?