[UPDATE--9:45PM It's all better now. Their propaganda is back online - or at least receivable here. I can't wait to hear how he justifies going to New York to appear as a side act human gimmick on the Letterman cavalcade. Someone with a personality would have warranted an actual interview wouldn't they. And why he's bidding for a seat at the UN Security Council for NZ after declaring our undying love for the US-Israel bloc the other day at the General Assembly - where we followed instructions and walked out on Iran. Last time we were on the Security Council we let Rwanda happen. What glory awaits us next time 'round? --]

I tried clicking through (on the top left) to johnkey.co.nz and billenglish.co.nz yesterday and got a disconnected signal. Nothing. Tried again today.

His Facebook is functioning. With 15,297 supporters someone might notice if that went down. He's had posted up his meeting with Obama and his sideshow appearance on Letterman. Both Americans are asking themselves the same thing: "Why is he out here?"

I note the chair of the Republican movement is registered as being a supporter (bottom left). Of both. 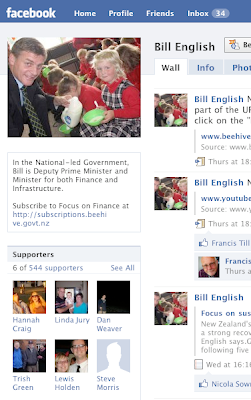 Not that it really means anything, in the few minutes after capturing that image I see the fearless Leftist, Tane (the other one, not the Standard one), has joined the support group too.

Maybe Key should declare his undying love for the Iranian or North Korean regimes regimes them. I sure that would be awesome.

Have you actually met Key?