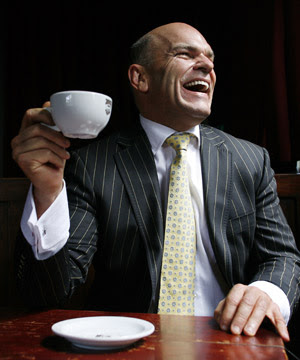 Hide tips less consultation
Councils would operate more efficiently with less compulsory public consultation, Local Government Minister Rodney Hide says. The ACT leader told delegates at the Local Government New Zealand conference in Christchurch yesterday that mandatory consultation was often overdone. He said his officials were looking at ways of reducing the amount of consultation and at simplifying the 10-year council plan process. Hide had been warned of a stormy reception from some delegates, and he was accused at the conference of bullying and bulldozing through local government reforms.

Hide want’s LESS consultation under local council’s and he’ll certainly get it. With his TABOR plans to strangle public spending forever using his bully tactics to ram through a hard right agenda.

Rodney hide is using the changes to the Super City as a blueprint for a massive privatization agenda in the National/ACT second term, what Rodney is trying to push here is a mini version of the TABOR deal ACT quietly slipped into their agreement with National. TABOR (Taxpayer Bill of Rights) is hard right ratchet legislation that aims to structurally collapse public spending so much so that private companies start to take over from ill funded public spending, the result of TABOR has been disastrous for Colorado as Gordon Campbell from Scoop has pointed out…

In sum, New Zealand is about to adopt as an instrument of restraint on government spending, a measure known to have already caused havoc, division and shortfalls in public service provision in its state of origin. The detailed evidence of TABOR’s flaws is contained in this extensive Bell Policy Center Report

So how do the TABOR mechanisms actually work ? As in Colorado, the measures Hide has been proposing would limit the growth rate of the revenues that government can collect and spend, and allow them to be adjusted upwards only to compensate for inflation and population growth, and nothing else. Not wage increases, or a desire to improve services. If revenues exceed the prior year’s allocation, this is returned to taxpayers as a rebate.

Crucially, the measure has a rachet down effect on public services. During boom times, central and local governments are prevented from using the higher revenues to expand or to improve public services, or to save for a rainy day. Moreover, because revenues will fall during a recession, the year-to-year measurement will mean that the new base for determining spending growth will become the low revenue point created by the recession. Hence, the TABOR approach renders permanent any cuts to public services that are imposed during bad years.

…what Rodney is trying to do is structurally change the way Public money can be spent on cultural, environmental and social budgets in such a radical way that underfunding ultimately collapses those services forcing councils and Government to hire private companies to take on those social services, thus privatizing them forever. Rodney needs a dry run example in the works before he tries it on with the National assets making his manipulations over the supercity a blueprint for his privatization agenda. By changing the way public money can be spent, Hide is crippling the tools given those elected to fund the concerns of society and it’s all being done at such break neck speed that the Media can’t keep up and debate the consequences of such radical right wing legislation.

NZ – you are being conned and a coup against the spirit of public service is underway. The results of this won’t dawn on people until the changes have been made and NZers realize what the right have done by crippling the ability to spend public money on public services only when those public services dry up and die.

No comments necessary for this one!