Ronald McNational Burger combo (do you want lies with that?) 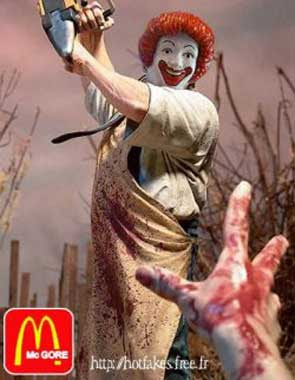 Don’t fret that the Treasury’s report in the budget that we could be facing 10% unemployment get you down or the fact that the Government have done sweet FA to stop a 1000 NZers becoming unemployed each week because the Government have lined up a special kind of hell for those unlucky enough to be unemployed. National have cut a deal with McDonalds, one of the worlds worst junk food polluters, to educate you at Burger University. Get a Degree in Pickle-ology or a Masters in the weird gooey shit they make their shakes with, a career producing awful food which contributes to our obesity problem that is clownishly dressed up to attract children the way flavoured cigarettes are is a future so riddled with disease you’ll wish you were dead, but with unemployment the way it is, National and Ronald both have you over a barrel because my friends the times, they are melting down…

Over 300,000 Kiwis on benefits
The number of New Zealanders receiving a benefit has risen to 302,000 - the highest level since 2005. There was "no escaping" the effects of the recession on the economy, Social Development and Employment Minister Paula Bennett told Parliament's social services select committee this morning. As unemployment soared the number of people receiving the dole increased by a net 1000 a week and the number of people claiming other benefits also rose, Ms Bennett said. "We are seeing unemployment rising more sharply than in previous recessions."

…oh yes we are, and let’s not forget that Miss Bennett on the first day in the house this year claimed to have seen a report with unemployment as high as 14%. Let’s ask anyone of those 1000 NZers who are being made unemployed each week if they enjoy being in a job environment created by ACT and National where your boss can sack you within the first 90 days, no questions asked, I bet those 1000 unemployed each week must LOVE that level of exploitation. Let’s hope those unemployed thank National in 2011. Wasn’t that job summit a farce!

Whats really odd about this story is that Paula Benefit mentioned this in parliament last month. I'm wondering why it's just being reported now.

Do any other countries have a 90 day probationary period for new worker?

I might be wrong but I think the UK has something similar. Can anyone help confirm if this is correct?

I'm curious, does the UK only have 8 public holidays per year? Based on George's assertion we should follow that as well and slice 6 of our public holidays off because that's what the UK does right curious?

Curious Gos is trying to pretend there isn't anything wrong with a 90 day right to sack, but perhaps the 1000 NZers going on the dole each week could answer the curious one?

National have exploited unemployment numbers for their small business voters, their hope is that the unemployed won't vote and based on past elections it's a solid punt. You can divide and rule without needing policy that benefits all of society.

I'm neutral on the 90 day law as I have no view one way or another.

I just asked a question about if other countries have a similar law.

Bomber has said the UK has one. So what is the result of this, both negative and positive?

(BTW it is Curious George not Curious Gos.)

Bomber has said the UK has one. So what is the result of this, both negative and positive?

Huh? You said this, not me. I said that if we simply followed everything the UK did we wouldn't have 14 public holidays, we would have 8.

Perfect opportunity to spit in the burgers.

What does Mr Bradbury suggest as an alternative to paid employment?

What are these 14 public holidays you are referring to?

According to the Department of Labour website we only get 11:

What 3 am I missing?

In England they have 8 statutory holidays but they also get 4 weeks holiday compared to our (very recent) three, so they end up with 36 days worth of holidays per year.

What difference this makes to the worth 90 day rule is a mystery.

Dave, hat tip to you, it's Australia who has 14 public holidays, I was mixing them up from last nights news story, and we have 4 weeks holiday not 3 weeks.

The point with the 90 day rule was that curious gos was suggesting the UK has it so why shouldn't we, I was commenting they have fewer public holidays than us as well so perhaps we should follow that example as well - the point being just because the UK has lax worker rights by allowing a 90 day right to sack it doesn't mean we should follow. But it's not what curious thinks anyway, it's the 10% unemployed who are having to try and work in the right to sack environment that National and ACT have created feel.

What does Mr Bradbury suggest as an alternative to paid employment?
Oh gosh, I don't know Sir, how about a jobs summit that actually did something like, oh I don't know - create some fucking jobs, that would be an ideal. Cutting deals with Ronald to supply cheap labour to push more junk food isn't a solution sir. Who is so pompus to call themsels sir anyway? Got daddy issues sir?

"Oh gosh, I don't know Sir, how about a jobs summit that actually did something like, oh I don't know - create some fucking jobs, that would be an ideal. "

A jobs summit is an ideal alternative to paid employment?

Wow. I think you'll find most unemployed people lack the means to get heavily involved in political grandstanding such as "job summits" and even if they did, there is little direct financial return. Im keen on a government that looks at turning on the dusty old jobs generating machine that sits covered in cobwebs in the basement of the beehive. All it needs is a new incentive sprocket, they're quite expensive I hear, perhaps we could borrow the money?

Well that'll learn me for being such a smarty pants :)

I'm not convinced that a 90 day probation period is a bad thing. It's a pretty standard thing. If you think that employers are going to deliberately hire people just so they can get some perverse pleasure sacking them after 90 days then you are dreaming. Employers spend a considerable amount of money training new employees so that they will be productive in the long-run. It doesn't make sense to sack them after 90 days, unless they are truly incompotent.