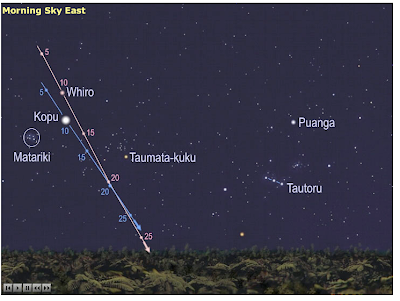 It is a smokey, still night, on the isthmus of Tamaki Makaurau, quite cold and a bit cloudy. There was a misty light drizzle at one point in the afternoon - otherwise fine. But the cloud is scattering and you can see clearly across the Waitemata.

There is a New Moon tonight. 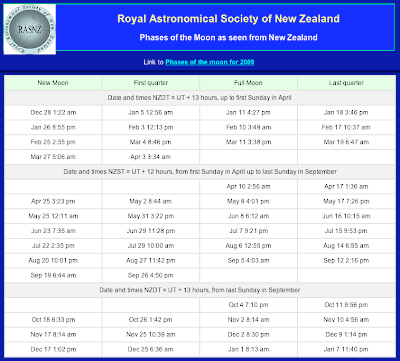 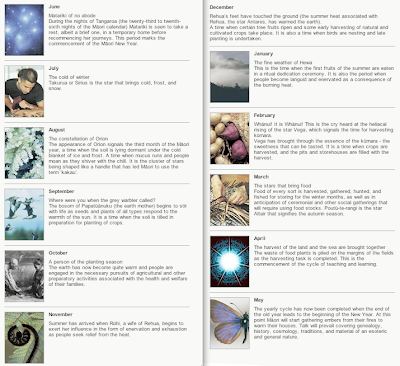 - from Te Papa. That's the Roman months explained in Maori terms, but that's not the real calander - the Maramataka - the Polynesian-based Maori lunar calendar.

Whiro is the first night of the moon calendar most Iwi have followed.

There are differences of opinion and practice - as with many customs it gives enough flexibility to do things in a rational and convenient way in the future with standardisation.

In temperate climates particularly among settled agricultural societies, the importance of the sun (actually the day length) in determining the seasons of the year led to efforts to use it as the basis for an annual calendar. One of the earliest was the Julian calendar introduced by Julius Caesar in 46 BC. This was based on the sidereal year (the period of revolution of the earth around the sun, or 365.25 days). Because their calculations were not entirely accurate, the Romans introduced a leap year of 366 days every 3 years. This calendar was later replaced by Pope Gregory XIII in 1582 in all Roman Catholic countries and in Britain and her colonies in 1752. The Gregorian calendar was based on the tropical rather than the sidereal year, i.e. on the time taken for two successive passages of the sun through the vernal equinox; equalling 365.24 days.

Maori also recognized the problems associated with use of the moon calendar and provided several possible solutions. One (mentioned above) is that they did as their Eastern Polynesian ancestors did, and added some moon nights to the year to maintain seasonal synchronicity. Another method was to include an additional thirteenth month every few years. Best
(1959:12) notes that some Maori informants provided him with lists of 13 month names, while 13 month names were also collected at Tahiti.

Maintaining monthly synchronicity with the moon phases may have involved both addition and/or deletion of moon nights. An example of the latter comes from the Reverend Metara te Ao-Marere of Otaki, who provided a maramataka obtained from Mita te Tai (no. 35). In his own notebook containing symbols pertaining to fishing activities on each moon night, the Reverend comments that “sometimes the full moon (Ohua) appeared on the 16th night, or even on the 17th, in which latter case the 15th, 16th and 17th nights would all be called Ohua, and several of the final nights names of the list would be dropped for that month. This would be for the purpose of balancing the lunar month” (quoted in Best 1986:113). 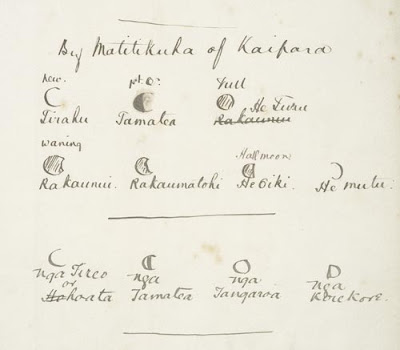 This Astronomy NZ article was quite interesting (click to enlarge). 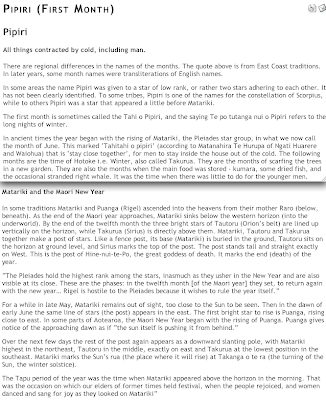 If Year Zero is the year the Treaty was signed - almost entirely in the summer and autumn of 1840 AD in the Roman, solar-based calendar of the Northern Hemisphere Europeans - then the first full year, Year 1 under the Treaty and the new legal order of the country, July 1840 - June 1841 is Year 1 in the lunar-based calendar of the Southern Hemisphere Polynesians. That puts us in June 2009 at Year 169 and would make next month Year 170 of the Treaty 170 TW in terms of counting Maori New Years in my reckoning.

A June/July New Year cut-off has the advantage of being synchronous to the government's financial year - the half year on a Roman Calendar.

Or, be like Barry Linton, who signs his comics with the date according to the Mayan calendar.

yeah, thats what i figured