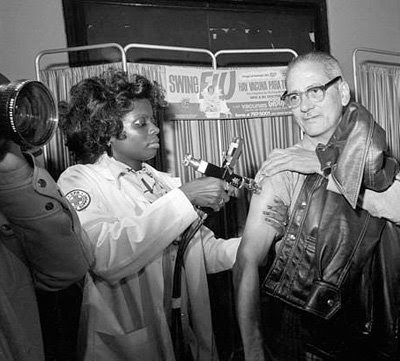 Swine flu is here
Ten Auckland pupils are likely to have contracted swine flu, tests have found. Health Minister Tony Ryall said last night that there had been 10 positive results from pupils of Rangitoto College who were part of a school party that returned on Saturday from Mexico, where swine influenza has killed more than 80 people.

Well at some time we were due for another pandemic weren’t we folks, the joy of evolution means that viruses are always out there trying to come up with a new concoction we have no immunity to, the question of course is if this is the next lethal strain that will hit us as hard as the infamous 1918 influenza and how much reaction it demands.

While we scramble to come up with answers, let’s not forget the last time swine flu hit with the US military as the source…

Ford was acting on the advice of medical experts, who believed they were dealing with a virus potentially as deadly as the one that caused the 1918 Spanish influenza pandemic.

The virus surfaced in February at Fort Dix, New Jersey, where 19-year-old Pvt. David Lewis told his drill instructor that he felt tired and weak, although not sick enough to skip a training hike. Lewis was dead with 24 hours.

The autopsy revealed that Lewis had been killed by "swine flu," an influenza virus originating in pigs. By then several other soldiers had been hospitalized with symptoms. Government doctors became alarmed when they discovered that at least 500 soldiers on the base were infected without becoming ill.

It recalled 1918, when infected soldiers returning from the trenches of World War I triggered a contagion that spread quickly around the world, killing at least 20 million people. Fearing another plague, the nation's health officials urged Ford to authorize a mass inoculation program aimed at reaching every man, woman and child. He did, to the tune of $135 million ($500 million in today's money).

Mass vaccinations started in October, but within weeks reports started coming in of people developing Guillain-Barré syndrome, a paralyzing nerve disease, right after taking the shot. Within two months, 500 people were affected, and more than 30 died. Amid a rising uproar and growing public reluctance to risk the shot, federal officials abruptly canceled the program Dec. 16.

In the end, 40 million Americans were inoculated, and there was no epidemic. A later, more technically advanced examination of the virus revealed that it was nowhere near as deadly as the 1918 influenza virus. The only recorded fatality from swine flu itself was the unfortunate Pvt. Lewis.
Hat Tip: Luke

"...the joy of evolution means that viruses are always out there trying to come up with a new concoction we have no immunity to,"

YEAH IT'S CALLED GLOBALISATION, OR MORE SPECIFICALLY "EXPORT EDUCATION" OF MOSTLY FOREIGN/CHINESE STUDENTS EVEN IN OUR PRIMARY SCHOOLS, WHAT'S NEXT DADDY DAYCARE?