Every day the fools in the blogosphere like DPF and Whaleoil and Chris Trotter are being proven embarrassingly far out of their depth as they continue to assume that the motivation of the military dictator is to bring an electoral utopia to Fiji where indigenous Fijians (of which the military is almost entirely composed) will be stripped of every political advantage they have... in order to advance (through the new democratic order) the economic agenda of the large Indian population (which is ultimately aimed towards seizing the native title off the Fijians once all the posturing and intellectualising has evaporated).

Well I can't accuse Chris Trotter of hypocrisy when it comes to tacitly backing Fijian censorship - he's gone and self-censored his blog. He has completely wiped his own post in which he slates Kiwipolitico blogger "Lew" over his supposed racism for favouring an end to the military dicatorship and in which Chris argues in favour of the regime. I had bookmarked it to get stuck into at a later date - but tonight upon clicking it... nothing... page doesn't exist. Went to his blog and... nothing... gone. It was entitled "Fiji Agonistes."

These are the antics of the professional writer-turned-blogger, reminiscent of our dear departed Poneke (now safely barricaded behind a privacy wall), who alters the record to protect his outside reputation, only to find the attempt at cleansing his copy book without any explanation intensifies the damage.

I do not wish to discourage Chris from blogging by mentioning these things - since the blogosphere is enhanced by his presence and the Left is better off for having someone decent to argue with - but the temptation to excise a dicky column online (when one cannot in print) must have been overwhelming given the sudden deterioration in Fiji this week. I think that is a cop out. If you write it you have to own it and defend it... or concede that just maybe you might have had it wrong. Most bloggers have been forced to re-think their position in light of new facts - it's not at all uncommon.

Now I could have it all wrong myself - Chris could be in the middle of a re-write that will knock Lew on his pasty white (and I'll have to remember it here because it's deleted) "Pakeha kupapa" arse. Or Lew could have taken offence at the tone and Chris may have just decided to remove the whole thing rather than do a rewrite. (This may possibly be the case as I recall my immediate reaction to reading it was to think if he had argued that way against me it would have been blogs blazing at 30 paces.) But at the moment that sort of wholesale erasure, without explanation, is just not a good look in the blogosphere.

Lew's trashing of Chris' "torrid" Whanganui/Wanganui piece - and the first post that references the "settlers" that Chris took great offence to in his deleted post - might have had a lot to do with the personal animosity between the two characters. So I'll quote from Chris' own words from his "h" article (where did the re-post on his blog go?... hmmm, was there ever one? We just don't know anymore) on Stuff:

THE ancient Egyptians understood very well this link between the names of things and the ability of men to recall them.

Which is why, when they wanted to annihilate all memory of their enemies, they took a chisel to their names, carved in hieroglyphs on their tombs and monuments.

[UPDATE-- Wednesday:
And courtesy of the technically superior Idiot/Savant (with his own critique of Trotter: "the problem is his entire political philosophy")
... viola! Voilà! 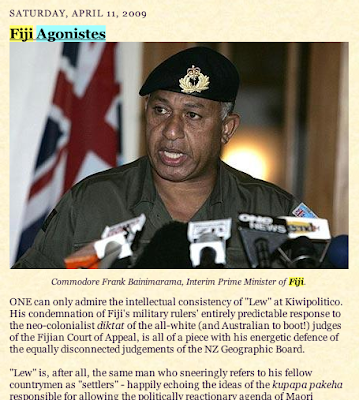 Cached for all to see. Inevitable really. -

ADDITIONAL-- 5:10PM:
Chris (complete with a giant portrait of himself with his piercing gaze and pale, Aryan, eyes staring directly - directly at me in particular) has issued a READER ADVISORY on the matter this morning on the deletion issue:

Why?
Because I wrote the posting in anger. Because I wrote it badly. Because it was unfair to Lew over at Kiwipolitico. And because, politically speaking, it was crap.
Bowalley Road is not a diary - it's a portfolio. What's more, it's my portfolio. If I post something which later strikes me as being of poor quality, or unfair, or politically misguided, I reserve the right to get rid of it.
If that offends the sensibilities of some blogosphere purists, then I'm sorry. But, for me, a blog is a creative enterprise, and, like all creative enterprises, subject to redaction.
Here endeth the lesson.
CHRIS TROTTER.

If Chris is running it purely as a portfolio - which is not a bad way to view the function of a blog (especially for a professional writer) - then so be it. It's the method of quality control that raises eyebrows. My criticism of the practice of a complete deletion - without explanation - still stands however. It isn't just about style, format, netiquette and "sensibilities" - it's about the credibility of the blog and it's usefulness to readers by maintaining some semblance of coherence, order and reliability. That begins to fade when a reader finds things missing on a regular basis. Readers of Poneke's blog, like myself, were frustrated - and a little amused - to discover all manner of posts disappeared.

Blogging (even if a blog has no comments section) in the context of the blogosphere is part of a conversation, a discourse. When parts of that conversation are deleted it makes things confusing.

Why did Poneke wholesale delete? As with Chris, I suspect it was to both protect himself from reader's comments and to protect the portfolio. Commercially it is quite sound to expunge dicky columns should a potential client/employer stumble across it, personally it may have been wise to cut a post that doesn't sit well upon later reflection; but it just doesn't suit blogging to do this without so much as an explanation.

You have to appreciate the candid honesty and self-criticism in the advisory though - you don't often see that in the blogosphere, let alone the media generally unless the BSA or some other authority has ordered it.

This afternoon Chris' online sparring partner/blogging bete noir/dick-waving combatant, Lew, at Kiwipolitico has gone on the record too:

Kiwipolitico is not the place for perpetuating such disagreements, and so I’ll leave it be with a few final words.

I remain a bit disappointed that Chris hasn’t bothered to engage with my previous critiques, and I agree somewhat with Lurgee’s assessment that he’s been dickwaving to try to gain status as “the alpha-male of the leftish bloglands”. While I was indeed furious enough with the personal attacks* to come out blazing against them, I was not behind the redaction; that’s Chris’ own doing. So, Chris, thank you - and while nothing is forgotten, I appreciate your good sense in this matter.

The problem for Trotter is that the internet - or rather, Google - never forgets. Which means that trying to disappear embarassing words down the memory hole just makes you look like a fool.

Well done I/S - but since you've raised the issue of "good blogger ethics" what about a Hat Tip on your post FFS! I don't want to come across all uptight, but throw me a frick'n bone here.

If you look at the totality of my comments on Fiji, I have been a harsh critic of the Commodore. I think I may have even advocated assassination at one stage.

I have said that the Commodore's professed aims are not bad, but that I am sceptical he will ever give up power and that at a minimum he needs to make progress towards elections.

His clamp down on media freedom now makes irrelevant (to me) any debate on his professed aims.

WHY WOULD OLD TROTSKY SELF-EDIT HIS BLOGS WHEN THE OBVIOUS ANSWER IS THAT HE'S BEING CENSORED, EITHER BY SAID BLOG 'OWNERS', UNABLE TO KEEP UP WITH THE FAST PACE OF POST-MODERNITY LIKE OTHER FORMS OF NEW MEDIA BEING THROWN INTO THE MIX TO BACK UP HIS ARGUMENT.OR ALTERNATIVELY, THE WATCHERS UP AT THE SUPERMARKET DRESSED LIKE PLAIN CLOTHES COPS, OR OLD LADIES AT BAKERS DELIGHT OR IN THE LIBRARY, ALL TO PROVIDE SECURITY APPARENTLY DURING A TIME OF TURMOIL AND UPHEAVAL OVERSEAS.REMEMBER THEY MIGHT BE LISTENING.

but since you've raised the issue of "good blogger ethics" what about a Hat Tip on your post FFS!Fuck, I was planning on doing one. But it seems to have got lost in the hour I spent staring at it tryign to get the ending right.

Will add one ASAP.

"Labour would love National to return to a pro-ANZUS policy, as this would transform the next election, (with old donkey being a one term wonder), into a referendum on the NUCLEAR-FREE issue."

The Fiji freedom blogs have been quite inspiring, but it's astonishing the degree to which people who should know better are acting as apologists.

Anyone who's particularly keen on the issue might wish to join us for tonight's Media7 recording at The Classic, arriving from 5pm.

Perhaps let me know with a comment here though ...

At 15/4/09 10:16am DPF said: "If you look at the totality of my comments on Fiji, I have been a harsh critic of the Commodore. I think I may have even advocated assassination at one stage".
Umm, is that, like, meant to show how reasonable and sensible and democratic you are, DPF?
Zero out of ten for you for that comment. I am glad I have never visited your blog.

KEITH LOCKE ON FIJI AND U.N PEACEKEEPERS (IN IRAQ?) AT 5.30PM ON NEWSTALK ZB WITH SUSAN WOOD.

IS FREEVIEW ON THE NET?

DPF: I've got that picture, you know...
I'm tempted to use it in conjunction with some quotes from your previous posts on the issue. The fact that "media freedom" (and only the curtailment within the last week) is your breaking point rather than all the other evidence over the last two years - including routine arbitrary detention and beatings, deaths in custody, stacking the state agencies with military cronies etc., etc. - is bewildering.

...did ya catch the interview with ngarimu and the hikoi a little earlier...maori still want the supercity with their 3 seats guaranteed of course but the pakeha calling in the troops on the corporatist 20 board of directors on the new council for tamaki and ppp/public/private type arrangements with water and public transport (with infratil/n.z bus selling bus depots out west/new lynn by the tunnel under the street for the trains to build more shopping malls the last thing we need in auckland if we cannot get there) up in the air are against it with the 3 other mayors and councils all staying put...is that the maori party position as well?

Viola?
what does music have to do with anything?