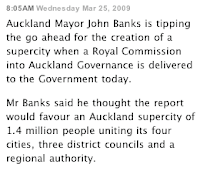 The PM has said that it may take a few days for the government - that is to say he of the safety yellow coloured blazer - to respond to the Royal Commission's 700 plus page report. Cr Bhatnagar tips they will use the term "City of Auckland" to describe the recommended new unitary authority. I hope so, it was the title of my submission to them. Of the substance it ought to be recommending the profound change that it is tacitly charged with finding.

The minister will want to use it - as any minister of any sort of government would - as a reason, an excuse, to leave their own ideological footprint upon the governmental landscape. I should imagine that any government would need to look at the legislative and fiscal implications of the recommendations - and inevitably any government will be looking too at how their own party organisations can game the democratic representation to its own advantage. The Tories, for example, kept putting up plans for single member FPP wards as the basis for the council. Some others - and that would include me - were pushing for a region-wide, at-large, proportional representation element similar to London's.

Whatever the Commission recommends it will be radically different than what we have now - to come back with anything less is unthinkable. How they tackle Auckland's transport oversight and alignments is crucial to the operation and success of the city. If they come down in favour of a stand-alone transit board and the elimination of these over-lapping committees we have at present then that would be something an Act minister could support. The funding however and the rating burdens are all questions that Rodney will want to work out from his Act perspective over the next few days. Small businesses are huge backers of Act - they are acutely peeved with both the RMA and their level of rates - these interests will come well ahead of those advocating for libraries and community group funding and so on.

The minister would be wary to go against anything they might recommend too. The Chair warned a week or so ago that the Commission's remedy must be taken as one dose rather than cherry-picked. Wellington will not be liking this - more independence from the capital's financial grasp and the ability to set its own course politically and thus interfere with Wellington's presumed mandate: policy and governance.

It's too soon to predict who will prevail in terms of agenda when we will not see the report until... Monday? A high-level round of consultations (esp. with the councils) would probably take place officially next week.

"...these interests will come well ahead of those advocating for libraries and community group funding and so on."

Take a look at the earthquake prone national library in wellington if it gets covered in glass.The current building looks pretty solid.22 years is not old.However, as per usual the real problem lies with the lack of oversight from the parliamentarians.What the hell does "preserving taonga" have to do with keeping one copy of at least every book ever published in english in new zealand.Check out Shelf Life in the editorial/anonymous of this weeks listener Tim.

P.S Why is Len Brown so nervous about the supercity.Does he know something we don't?

P.S.S Integrated ticketing is no big loss unlike the science guy from Uni thought in the paper.

Most Aucklanders believe it was stolen and imprisoned in Wellington - some believe that it is buried in a basement in Greys Ave. It's mythological.

You don't want to use MMP like the London Assembly. Instead, you should use STV-PR like the cities in Scotland. The STV constituencies (electoral districts) should be tailored to match the local communities within the "greater city area".