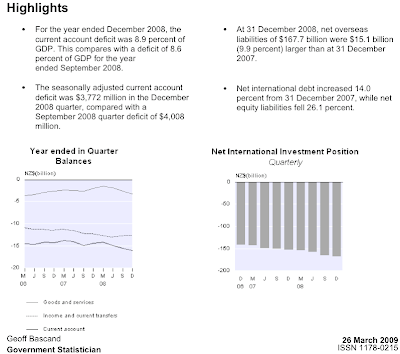 Scoop reporting the stats department has the NZ financial position deteriorating further - we are still spending on imports (and feeling oil price) despite the downturn in export earnings [*see below] - referred to as "Highlights":

And how is that deficit - that waistline belly droop of over-consumption - going to be packaged to a skeptical and hesitant world? 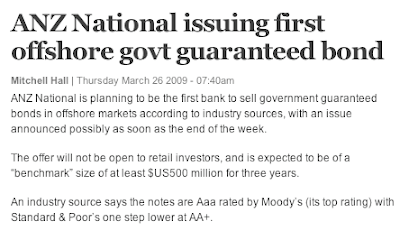 Commentator Bernard Hickey notes that the Reserve Bank is pushing banks to borrow longer term offshore rather than the 30-90 days currently used to roll over foreign debt, which comprises roughly 40% of the banks’ total funding of $234 billion.

Concerned that no one was taking up the government’s offer, the fees were cut for the wholesale bond guarantee in January – which is now having the desired effect with ANZ National’s purported move.

And now that external funding has a government guarantee? WTF? A domestic deposit insurance type scheme is quite different to what it seems these bonds are. This is a deposit insurance for foreign banks. Even if it is targeted at getting out of the short trades of hot money into longer term and better managed debt it still comes with risks, now widened directly to the Treasury if something ruptures as it has for Europe and America.

It seems prudent for the RBNZ to stop trying to make the NZD the 10th most traded currency in the world. 11th place as we are now exposes us to huge risks and dependence on liquidity conditions and credit ratings agencies - all things beyond the control of anyone in Thorndon or Queen Street. For a country with perhaps the 50th biggest GDP to try to hype their currency as if it was the 10th is just asking for an Icelandic type meltdown. Only now - March 2009 - do the authorities start to look like they are starting to address the situation.

Worse case scenarios: We've got the NZ Super fund - several billion can be repatriated or used in line with National's policy, the RBNZ have a $15b swap facility with the Fed that ends in April. Intervention of some description becoming necessary is still on the cards with these weak balance of payments figures. We have to factor in also that the drop in activity will decrease the GDP figures and the percentage on that will increase even though the total amount will not change significantly - that will make the situation appear worse and may trigger some further problems, but we have a few months of breathing space perhaps before those flow through on paper.

[* Matt Nolan said...
Note that the goods balance was positive - so the thing about spending more on imports than exports isn't quite on the money.
From Stats NZ:
The seasonally adjusted current account deficit for the December 2008 quarter was $3,772 million, $236 million smaller than the deficit in the September 2008 quarter. The smaller deficit in the latest quarter was due to an increase in the value of exports of goods, which was partly offset by increased value of imports of services. Exports of goods increased due to higher exports of dairy and forestry products.

Note that the goods balance was positive - so the thing about spending more on imports than exports isn't quite on the money.