Will the other cops get away with Home D for their part in the alleged killing? 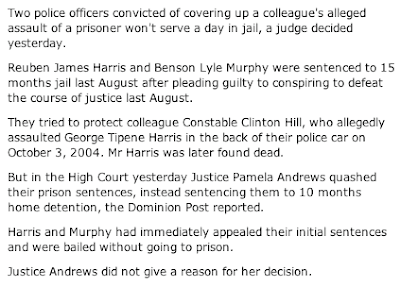 The NZPA report says that the judge didn't give a reason why these cops - two of the three who helped cover up an alleged killing by a police colleague - will not serve time in prison. Ten months Home D. Given the seriousness of the incident being hushed up (a death) and the breach of public trust and so on the move to have them kept out of serving actual jail time is concerning.

Andrews J must have her reasons of course. Is one of them that they will be providing evidence against Hill and the other policeman on trial? There must be a good reason they got a discount, because if one doesn't transpire it undermines not just the public confidence in the police, but confidence in the justice system as a whole and the judiciary in particular.

Hill is due to appear in the High Court at Auckland today charged with Mr Harris's manslaughter while a police sergeant has been charged with conspiring to pervert the course of justice.

I suppose the alleged assault that allegedly led to the death was only supposed to be a beating like this one a few months back that was because the hand-cuffed offender was allegedly "resisting their orders." 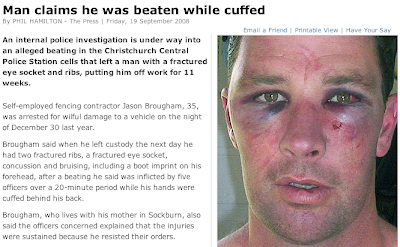 what a surprise - pigs looking after pigs, where are all the pro cops posters? Why are they so silent on this case?

Cops always look after eachother, it's what they do, they aren't there to protect the public, they protect themselves

Anon: this is a judge, not a police officer. But it does smnell, and her refusal to give reasons means that there is no way of dismissing it.

Which simply reinforces the value of open justice. If we can't see what's going on, we are entitled to conclude the worst.

Idiot/Savant said...
Anon: this is a judge, not a police officer.

Sorry idiot, but under tumeke logic, that makes you either a policeman, or a police apologist.