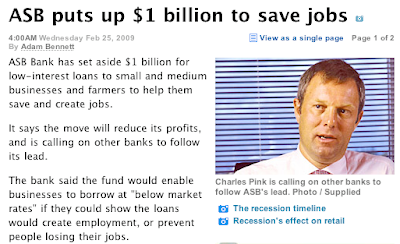 The media have been giving the Aussie-owned ASB Bank a lot of uncritical publicity over their decision to abandon capitalism, monetary theory and the profit motive in order to "save jobs". Really? Well that's the angle they play up, and I do not believe them. We should be cynical of these big banks that have gouged out ever larger margins for themselves and not passed on the full Reserve Bank rate cuts of the last few months to their customers. They claim it will be "below market rates" - but considering the banking cartel have pumped up those rates recently the claim may turn out to be quite hollow.

Apparently, if you can suspend your disbelief, they now have so much money that they can lend it out at an un-gouged, un-extortionate rate - but only to large companies coming to them for a new loan. Which is what banks normally do - give rich people with secure assets access to low interest loans to make them richer. So... what? ASB's official statement:

“These loans are specifically aimed at businesses looking to invest in a new project, process or expansion initiative. Provided the business case for new lending stacks up, and will result in additional people being employed, or stop existing employees losing their jobs, we will consider it,” said Mr Pink.

“A low interest rate and certainty around interest payments for the next two years might just be the factor that a business needs in this environment to decide an opportunity is a ‘go’.”

So ASB thinks interest rates will fall below 5% in the next year and will stay there for at least another year - that's another way of explaining this move. Since normal criteria apply anyway (it's just the rate that is different) only large established firms can get it. Any talk about saving jobs is PR wash and it will be gross (rather than net):

ASB will separately account for this pool of lending funds and will report publicly on progress in terms of loans extended and jobs saved.
- Laughing yet? All the way to the bank! The ASB loans out $10m to F&P, or whoever, and they will then turn around and claim in their ad campaign (that this announcement foreshadows) that ASB has saved 1600 NZ jobs, or whatever. Really? Will they account for the jobs lost because:
Applications to refinance existing borrowings will not qualify for a Job Creation Loan.
-?

Watch all the other trading banks quietly offer the same, its a stealthy way of protecting their book.

Company A has a 10m dollar loan that is due to roll over with say BNZ, they go cap in hand to the ASB who give them the cheap rate for a 'New' loan. Company B with same loan at ASB does similar with BNZ. Both banks win because they lower their exposure and lower the risk of default on loans to companies that can trade out of this mess eventually.