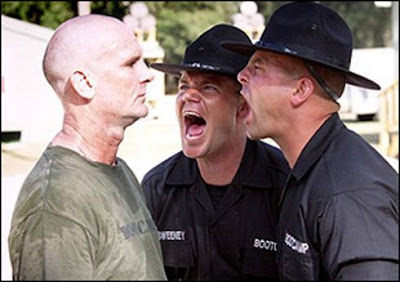 Judge puts boot into boot camps
The traditional "boot camp" for young offenders was "arguably the least successful sentence in the Western world", the principal Youth Court judge says.
"It made them healthier, fitter, faster, but they were still burglars, just harder to catch, " Judge Andrew Becroft said. He said physical programmes backed up by mentoring and family support could work, but New Zealand's corrective training camps, which ran up till 2002, found 92 per cent of young attendees reoffended within a year.
"It was a spectacular, tragic, flawed, failure," he said.

Well, well, well – exactly what we here at Tumeke pointed out – BOOT CAMPS DON’T WORK – but right wing NZ doesn’t want to hear that, right wing NZ wants to burn $35 million to feel good about putting a hard kick up the arse of youth they hate – it’s a dog whistle spite thing, just like allowing junk food back into schools to increase our diabetes rates and heart disease numbers for the most pathetic ‘it’s-nanny-state-to-force-your-kids-to-eat-fresh-fruit’ reason by Ronald McDonald’s new girlfriend, Anne Tolley. Same with dumping incandescent energy saving lightbulbs and increasing truancy fines to $3000, they serve no purpose beyond arousing red necks to crimson.

OK, perhaps boot camps dont work. But you could at least say WHY YOU dont think they work - or put a link to a blog post where you have explained why they dont work - or what the youth court judge thinks could stop the reoffending.

Otherwise all you are doing is whinging and rabbiting front page news.

Dave, check last weeks post on it we have had this debate several times, for some reason the right wing don't want to accept that boot camps don't work. they would prefer to blow $35 million to make themselves feel better.

Dave, check last weeks post on it we have had this debate several times...

...but you never gave an example of what other measures that could be used.

So, bomber, what do you think could be used instead of boot camps?

Bomber, I haven't got time to trawl through your posts. Provide links. At least I came in and commented - many would just use RSS.

Are you afraid of ending up in one Bomber?
The other point you seem to be missing regards school food and light-bulbs, is that now there's choice, rather than compulsion. Tell someone they can't have something and what happens? Ban's are what don't work.

Where as I have time to spoon feed you Dave? It was last week, Feb 17th, it's called "$35 million raw meat for the howling electorate publicity campaign" there was much debate in the comments sections and many points made there at solutions raised like outward bound as opposed to military boot camps.

The other point you seem to be missing regards school food and light-bulbs, is that now there's choice, rather than compulsion. Tell someone they can't have something and what happens? Ban's are what don't work.

Right so letting junk food back into schools and screwing over energy effeceint light bulbs is okay because we have to have choice in these matters regardless of the benefits. And you call yourself reasonable?

Bomber is quite rightly annoyed because this $35 million of tax payers money being earmarked for these pointless and brutalising 'boot camps' would be better on spent on community projects that help with the causes of crime and teen delinquency.

This about Jonkey showing middle-NZ he is 'tough on crime' not actually fixing any of the societal problems that cause crim inj the first place.

10:20 Anon. Are you now unable to buy energy efficient light-bulbs?.Have they been banned or something, along with fruit at tuck shops? I don't think I heard about that. Do you have any links I could check for myself?

Hey Ray, how about the link to the Principle Youth Court Judge Andrew Bercroft who says that Boot Camps don't work, or is the Principle Youth Court Judge not good enough for you Ray? I mean what would he know huh, prolly just another tree hugging pinko, and let's forget all the academic reserach that shows boot camps don't work, let's just blow $35 million to scratch your desire for a bit of the bash huh?

Your claim that it is your god given 'right' to buy lighbulbs which suck up power and your 'right' to be able to go to a tuck shop to buy a pie are just so infantile it shows how desperate the right have become in trying to defend this crap.

Hey Ray, how about the link to the Principle Youth Court Judge Andrew Bercroft who says that Boot Camps don't work,

Hey Anon, why don't you stop ignoring the partin the article that said:"Judge Andrew Becroft said. He said physical programmes backed up by mentoring and family support could work"

You know that part were Judge Becroft is saying the actual changes that National are proposing, could work?
Did you miss that bit? Or are you, just like Bomber, trying to tell us that National are going to put the same boot camps in to place that were in operation until 2002?

YAWN - anon we went through all these points last week in the blog I wrote called "$35 million raw meat for the howling electorate publicity campaign" where the point was made several times that those programs did work where as the military boot camps did not work.

They should make a giant Conan's wheel and chain these youth offenders to it. Then they push the wheel all day. Connect the wheel to a massive power turbine.

2:42 Anon: Do you really need to be directed as to what to say, do, and believe? What problem do you have with freedom of choice? Are you a complete idiot?

Boot Camps don't work, because they let them back out into the community.
But hey Militarism does work!

They just need to serve a little time, learn a trade and get some pride into their lives.

It's like all residential detox programmes, you can't put them back into the environment they came out of.

Bomber you are wrong.
Boot camps do work for youth who opt into them. Check out the record of our schools who provide Service Academies for students of high school age. I know Aranui High (ChCh) & Kelston Boys have very successful programs in operation that are targeted at 'at risk' teenagers.
ps I vote Green!

Boot camps aren't 'pointless & brutalising' you namby-pamby fool. They instill people with skills/ self-belief & teach them how to lead;that's the key function of military training!

Best line ever heard on a drill square (Parade Ground).

Laughter erupts and everyone is on CB (Confined to Barracks - extra duties and more drill (marching).

Second hand story but I believe it.