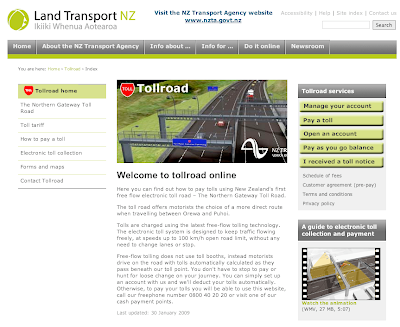 In other systems around the world - and previously in NZ - there is a toll booth where the toll charge is paid, usually in cash without the need to alight from the vehicle. As I understand it this does not exist on the new Puhoi-Orewa section of SH1. The motorist must pull over to a petrol station, walk inside, and pay at a terminal. From the toll website above:

Free-flow tolling does not use toll booths, instead motorists drive on the road with tolls automatically calculated as they pass beneath our toll point. You don't have to stop to pay or hunt for loose change on your journey.

That design is not to make it easier for the motorist, it is to maximise revenue and minimise the costs for the state tolling agency. They want the motorists to fly through so they can be pinged extra when they fail to pay within the three days. The ridiculous placement of the terminals is set up to discourage cash payments and induce motorists to set up an account. They should be accessible from a vehicle. What they have done is inconvenience motorists by deliberately making it more difficult to pay than it has to be.

So easy to drive through, but that saved few minutes will be taken up dicking around with the internet payment won't it. Far from the toll site's insinuation that looking for change is a hassle it is often the best way - the most practical and efficient way - to pay small one-off or irregular payments. 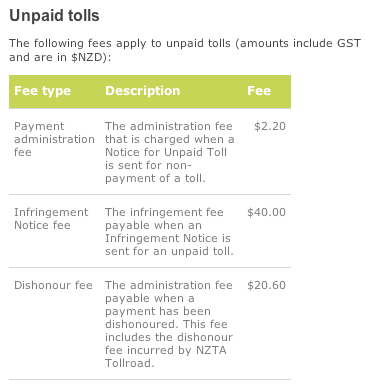 If it was such a marvelous concept why not for parking meters? There are enough cameras in most shopping and CBD areas already. Just park anywhere - don't bother "hunting for loose change" - and the pay on the internet up to three days later. If you really want to be difficult and insist on paying in actual cash you can drive to an office somewhere and pay before you park. No? Exactly: people don't want to be forced into playing games with the council/transit/Wilson's or whoever, especially where the failure to remember the rules of the game results in fines and the ridiculous have of the "dishonour fee". It's $2 FFS - can't they have a few lanes off to the side where you just throw a $2 coin (or a combination of coins) into a machine from the car? It doesn't have to be manned.

Not everyone will be using it. 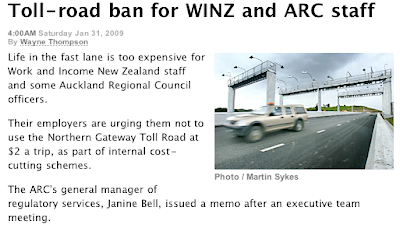 An alpurt engineer told me a few months ago that Transit wanted to "educate" the public into boothless toll systems, so when more toll roads are built around the country it can all be the same staffless account based system.
Its not just revenue gathering for the state, its more to make Transits job easier at the expense of drivers convenience(which I concede sounds like the same thing).

I agree the system is stupid- the Mayor before present of Rodney District predicted Transit would fuck it up- and people would either not pay easily, or would plain boycott it (as is happening in significant numbers). RDC agreed to it knowing that after the predicted revenue couldnt be raised, the tolls would be removed because the asset couldnt sit there under used- as the cost benefit would actually be worse especially with higher road maintenance than budgeted on the old highway because of higher traffic counts- and we would soon have a newish, shiny FREE motorway at central government's expense. Astute I thought.

Having seen toll roads overseas I think Kiws are mad to put up with the things. They are NEVER about getting a driver from A to B. Instead, they become all about the act of paying - not the act of moving. The new toll road is a prime example of exactly this.

I won't be using that road or any other.

I hope no one else does either. The coming rises in petrol will make such projects a waste of money anyway.

Of all the fucked up things created, this has got to be the best one!
LIkewise, I will NOT be using this road. Not even if you paid me to. Tim, well done! Your points exactly - no fucken machines to drop your coins into. Nope, just drive on through and we'll fuck you over next week. Fucken Baycorp will be onto the case - insisting they become the leading collection department and abuse the hell out of all and sundry! Like they do...
Heck, it's gonna be one hell of a big bed to fit all these wankers in!

Baycorp aye? Never though of that.
That's one company that hasn't had it's arse dragged though the media for quite a while now. Still there and still harassing the public for money.

ARC and WINZ aren't allowed to use it. But it saves 10 minutes?! The minimum wage is more than $2 per 10 minutes (just).