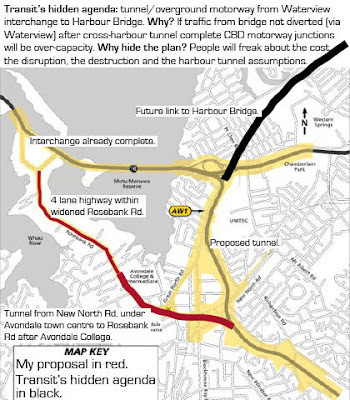 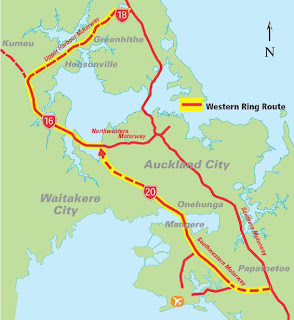 Would NZTA just stop tunneling once they get to the Pt Chevalier interchange? Geo-technical problems might preclude a harbour bridge to Pt Chev. tunnel, but I am convinced that is the long term - and undisclosed - concept that underpins the move to take the motorway there rather than to the West, up Rosebank Rd.

It was the "Waterview connection" it was never the Avondale or Rosebank connection.

Now the new Transport Minister thinks that the expensive set of planned tunnels - coincidentally through Helen Clark's electorate - is too much. Three years ago the cost was going to be $1.15 billion. 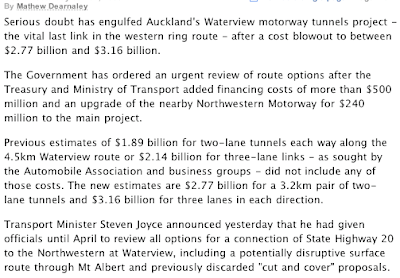 If the government wants to dig tunnels they should start in town where links to the main railway station have been planned since the 1920s. Here's my updated version of a possible loop (Melbourne scenario): 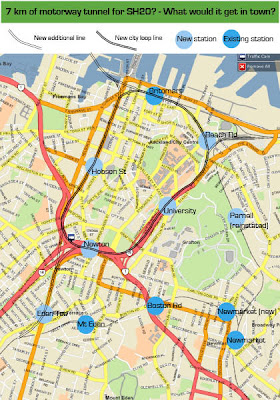 I walked down the Oakley Creek path last month - it runs from the intersection of Gt North and Blockhouse Bay Rd to the Pt Chev interchange. It was tranquil, there was bird life, even rabbits, there is a waterfall about halfway down. Unitec is on one side and parkland alongside Gt North Rd on the other. It would be a nasty impact to have a motorway above ground in that area.

Tim why would you separate the Southern/Northern traffic into two motorway streams only to reunite them on the bridge?

The Rosebank alternative is by far the best and it fits with the SW/NW scenario which is to route the industry from Albany etc down to the airport avoiding the Harbour bridge.

Two motorways, two bridges, only question is how to complete the second link.

Isn't that the point?

We could buy ourselves an actual military with 3 billion.