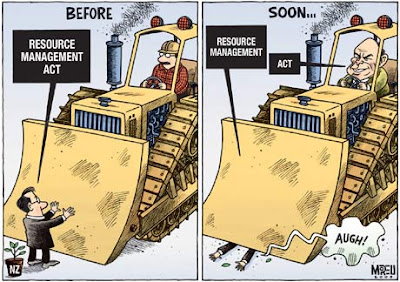 National eyes land to ease home crisis
Plans to urge councils to free up land for development should ease the housing affordability crisis, the Government says.
A survey published yesterday shows New Zealand is the second most expensive of six selected "housing bubble" countries in which to buy a house, just behind Australia with median prices 5.7 times the average national income. Housing Minister Phil Heatley said yesterday that the Government planned initiatives to make home ownership more affordable, including:
Working with councils to remove planning restrictions on Maori-owned land for housing developments.
Ensuring councils planned for a "forward supply" of suitable land zoned for new housing.
Boosting the Housing Innovation Fund which provides money for community housing providers to $20 million.
Introducing a "Gateway" housing project, which would provide first homeowners the use of a ready-to-build leased section. They would later have the first option to buy the land at its original capital value, plus 3 per cent for every year they lived on it.

Wow. Wow. Wow. Incredible huh, our property prices aren’t the problem of middle class speculators who all wanted to get rich quick in an overheated market with no capital gains tax in a banking environment where the banks were throwing cheap cash around to everyone with a pulse (and that entire cheap credit bubble has imploded) has nothing to do with our house prices being high, oh no, apparently Councils haven’t raped enough greenbelt land and National are going to throw out any rules that force land developers into being more humane and not the running hyenas of capitalism they usually are. Won‘t this new environment just help out property developers and the eventual slum lords they’ll end up selling these properties to, indeed won’t this just aid in the creation of more slum lords, because 'cheap' or not, what bank will lend by the end of the year with less than a 20% deposit? How many first home buyers have $70 000 for their deposit? This is a wet band-aid at best.

Land affordability, which to a large extent has a massive effect on house prizes (as does speculation). My point is, its not an either/or, its a both.

If you make more land available, and reduce the costs associated with that

Yes the Banks will require some 65K for this, but thats a hell of a lot more sensible than borrowing 95-100% and running the risk of negative equity.

At the moment land and subdivison costs are keeping the costs of development high.

I for one am still WAITING for some kind of LEADERSHIP from Jonkey and his band of recycled reprobates.

Is this the best they can come up with ?

While other leaders are working hard to come up with strategies and talk to their constituents about the looming economic crisis , I get the feeling Key is sitting in a dark room crapping himself...but ...HEY !... help is at hand ... he can now swan off to PNG and talk his particular brand of pidgin english with experts

This Govt hasn't a CLUE what to do...and it's starting to show...whatever happened to their 100 days of action ? Was that meant to be spread out over 3 years ?

Um Bomber I don't know if you realise this but property 'speculators' being residential developers or slum lords as you call them would be dead against this plan for new greenfields development because the new supply of house would decrease the value and rental yields of existing houses.

As a landlord myself I pray that no new houses are built thereby enabling me to make money by charging people more rent while doing absolutely nothing.

Maybe you should think this one through again. Increasing the stock of houses actually helps poor people.

Increasing the stock of houses actually helps poor people - exactly, but only if immigration is limited.

Given National's record on immigration I think your rental yields should be ok.

At the moment land and subdivison costs are keeping the costs of development high.

trademans are paid about fifty an hour if they are lucky while corporate lawyers bill out starting at $250 minimum.

What a load of shit. I wish it were true though!

I would imagine builders rates increasing as the registration comes into effect....

opps i clicked on anonymous by mistake. the 1.33pm comment was mine though. cheers

trademans are paid about fifty an hour if they are lucky while corporate lawyers bill out starting at $250 minimum.

S/e tradesmen and businesses were charging themselves out at considerably more than $50 per hour in the boom, adding to the price of building the houses.

A bit rich for builders/tradesmen moaning about compliance costs when they were upping their prices too.

As a person who was getting a house built, the amount of tradesmen driving up in brand new Ford F150's demanding obscene rates to plumb/wire/build, I really have little sympathy.

And don't get me started on the average builders skill levels (or lack thereof)...

What do you consider to be a fair rate for a competant, qualified and experianced builder/project manager to charge themselves out at?

$50 per hour is shitloads for a builder. People should shop around and they will probably find an immigrant charging half as much who is twice as good.

Clayton Cosgrove is siding with the Property Speculators in Christchurch.
He is even siding with one who wants to set up a Holiday Park near the Airport. I think they're calling it 8 Mile.

Clayton Cosgrove is siding with the Property Speculators in Christchurch.
He is even siding with one who wants to set up a Holiday Park near the Airport. I think they're calling it 8 Mile.

"$50 per hour is shitloads for a builder. People should shop around and they will probably find an immigrant charging half as much who is twice as good."

When your house leaks because you pay peanuts, dont go crying to the herald...

Ironically all the leaky houses in the news at the moment were built by property developers who charged an absolute fortune.

Oh yes it is true. If you read the papers you would see that it's high profile developers trying to avoid accountability. Not unqualified discount builders.

Because what you get in the herald in respect of leaky buildings is the gospel truth.

But we are off track - there is a difference between a builder and a developer.

If you wanna really get into leaky buildings, how about the following

1) the manufacturers of monolithic cladding systems that failed.
2) The timber manufacturers who argued that untreated treatment should be used
3) The government who allowed them to do so.

These are the three groups who need to take responsibility.

The developer is ultimately responsible because he is the one who decides which materials are used.

And if they weren't responsible they wouldn't be taking desperate measures to deny involvement in the property scene.