[UPDATE: 7:45PM NZDT:
ODT reporting:
ANZ and National Bank have announced they are dropping their fixed-term mortgage rates ahead of the next Official Cash Rate (OCR) announcement.
In a statement released today, ANZ and National said their new two-year rate would be 7%, down 0.20%.
Three, four and five-year fixed rates will drop to 7.10%, a fall of between 0.10 and 0.89%. The rates will be effective from tomorrow. The next OCR announcement is scheduled for January 29.

And the public are meant to be impressed by this? Don't be duped by the PR. As I posted last month:
Every bank except Westpac has increased their gross margins - exactly what the Reserve Bank Governor knew would happen - that's why he was particular about publicly warning them not to. And a fortnight is long enough to have passed the bank's lowered costs of wholesale borrowing on. But that's the market - a cartel. 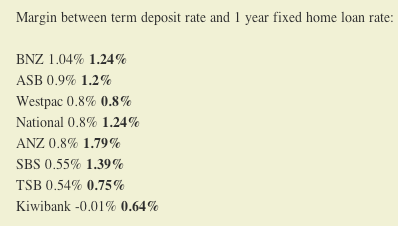 The bold is the margin after the cut. Now they drop a sliver off their gouging and their customers are supposed to thank the consistently worst rated bank for customer service for making it rain jellybeans?

The rates get dropped on 5 December, but it only gets passed on - in part - many weeks later. And won't that just be used as an excuse for why they won't fall in line with what the RBNZ does on 29 January.
-- UPDATE ENDS]

RNZ reporting that the S&P credit rating downgrade has affected our dollar. I have always said that credit rating agencies will trigger a NZD collapse - but relative to other economies NZ isn't doing badly and S&P's outlook downgrade was a long-term indicator. Our interest rates are still relatively high and this would be keeping up demand for our dollars and means that the RBNZ Governor can't just whack 2% (or whatever) off the bank's key rate - the dollar would dive. This was partly the thinking behind the extraordinary statement that he would not change the rate between the scheduled times (November I think it was) when other central banks were slashing their rates.
National Bank forex charts tell the tale: 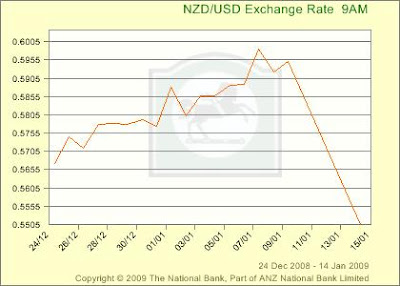 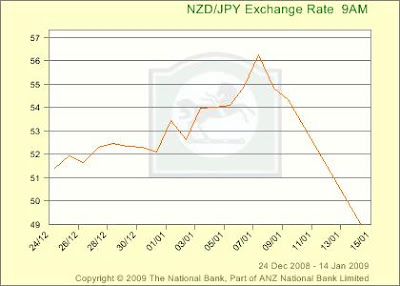 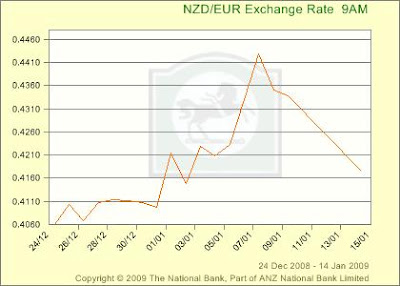 You have to wonder at the NZ collective intelligence in this recession. From the RNZ story:
Bank of New Zealand says New Zealand is being 'picked on' by Standard & Poor's.
A NZ Herald story from last week spoke of the lag in understanding what has happened to the global economy:

Or 'New Zealanders "she'll be right" attitude prevalent despite crisis' could have been another headline. 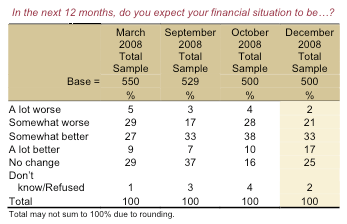 Research NZ and their study has shown how disconnected and ignorant the public is - the meltdown started in October. Do people not read the papers? People were more pessimistic in March! Like maybe we are through the worst now... it's summer... lighten up... Business is only too well aware of how fucked things are, but the public - the consumers - seem unaware. And if they really think things are going to be peachy this year and make spending/financial decisions on that basis things will turn even nastier.

I blame the martians and also my wife for spending too much money on make up.

No Anonymous, this is evidence that S&P have no confidence in the new National Government to create any stimulus plan that will show a more rapid recovery from the bottom dropping out of the finance market, or our main export markets abilities to continue the same level of purchasing as before this American Greed machine caused a meltdown.
It's all a bunch of bullshit and manipulation!
"She'll be right" has nothing to do with it other than pissing off the money manipulator's who are trying to scare the pants off everyone in order to get them to comply with their global control plans. New Zealand hasn't crumbled yet, and have remained relatively untouched and bouyant - it's time to put the fear of God into us to bring us into line with the other sheep!
It's a matter of "Who Profits" from our downgrade... Figure that one out and you'll find the answer!
They can't afford to have some little country in the middle of nowhere doing well while they're bleeding out on Wall Street and in the Central Banks all over the globe - not a good look for their global dominance plans. It's all a matter of covering their tracks to make the "Quo Bono" question a hard one to answer!
There are a lot of greedy Jews in the mix, but for the most part this is a Zionist/Capitalist Joint Venture.

Mr Key said the United States was very weak economic and he noted in Hawaii the tourist numbers were down.
"It was like a ghost town walking through the shops," Mr Key said.
"We did our best to help the US economy but even my wife and I couldn't save the US economy."

Go fuck yourself you rich prick.

Cut it out - consumer and business confidence is a contrarian indicator - always has been. Confidence was at its highest just before the dot com crash and 87 crash.

No doubt this is something you would like to blame on Jewish bankers.

Today is NOTHING like 1930's - money supply and globalisation has seen to that. I have started reinvesting in the US market.

Perhaps you would like to start a wager on whether the NZX will be lower at 31/12/09 than it is now.

I will bet with you, starting at NZD100 that it will be higher.

Ruth:
Samclemenz is the one blaming Jewish bankers - not me. The idea has no currency, as it were. No supporting information or link is given so I dismiss it as paranoid anti-semitism.

Invest your heart away in the US if you think it has bottomed out already - I doubt it. There are distressed assets and so forth that ready money could mop up now I suppose so maybe you will make on it despite a further downturn. Good luck to you.

As for NZ, and:
Confidence was at its highest just before the dot com crash and 87 crash.
- the Research NZ survey was taken after the crash and during the long fall - after October, not before - that is why it surprised me.

Your wager is bold, but the idea of a forecast is better. I'll make one soon.

Re the US market. I doubt it too. Think DOW 7000 as a bottom then sitting there for years.


Here are a few suggested rules.

3. The referee will then email us both informing us that we have paid up.

4. The referee may keep the interest earned on the NZ$200 (snort) sitting in his/her bank account for the year as a reward for his/her services.


Do you agree with these rules?

Are there any others that we need to add?

I suggest Bomber be the referee.

No hard feelings if you don't want to put your money where your mouth is Tim. I have had similar poblems elsewhere - a good friend of Cresswell owes me $500. ;-)

Ruth:
So I'll be wrong and $100 worse off if NZ is in better shape at the end of the year... *chicken clucking sounds* I'll stick to making my doom-mongering predictions and you can stick to making money - but not off me ;)

There are a lot of greedy Jews in the mix, but for the most part this is a Zionist/Capitalist Joint Venture.

Poor old Sam, can't make a point without blaming the Jews.
You would have been a pig in shit in Germany in '39 wouldn't you Sam.