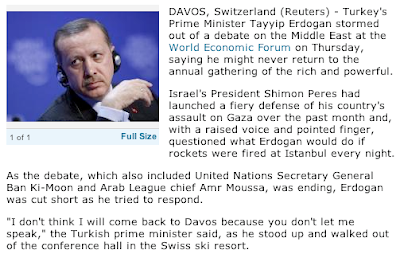 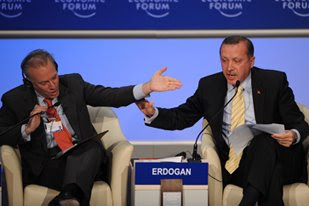 Al Jazeera:
Peres told Erdogan during the heated panel discussion that he would have acted in the same manner if rockets had been falling on Istanbul.
Moderator David Ignatius, a Washington Post columnist, then told Erdogan that he had "only a minute" to respond to a lengthy monologue by Peres.
Erdogan said: "I find it very sad that people applaud what you said. There have been many people killed. And I think that it is very wrong and it is not humanitarian."
Ignatius twice attempted to finish the debate, saying, "We really do need to get people to dinner."
Erdogan then said: "Thank you very much. Thank you very much. Thank you very much. I don't think I will come back to Davos after this."
Amr Moussa, the secretary-general of the Arab League and former Egyptian foreign minister, said Erdogan's action was understandable.
He said: "Mr Erdogan said what he wanted to say and then he left. That's all. He was right," adding that Israel "doesn't listen". --UPDATE ENDS] 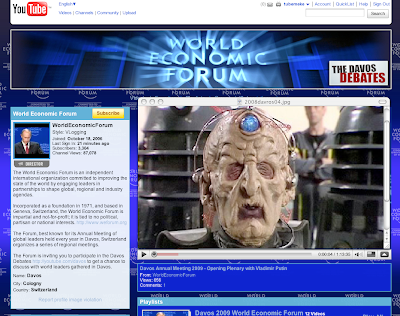 Davos - the World Economic Forum. They have that meeting every year in the alps and it's all very serious and let's solve the world's problems and so on. The biggest of which is the financial apocoleptic death spasm since Lehman Bros went arse up in September. And the dominos haven't stopped falling on Wall Street either. So I was amused to see the The Future of the Global Financial System; A Near-Term Outlook and Long-Term Scenarios report from the forum was co-chaired by the sacked now ex-"President of Global Banking, Securities and Wealth Management, Bank of America Merrill Lynch," (as described in the report) John A Thain, as described by Wikipedia:

the last chairman and chief executive officer of Merrill Lynch before its merger with Bank of America. Thain was designated to become president of global banking, securities, and wealth management at the newly combined company, but he resigned on January 22, 2009. Bank of America lost confidence in Thain after he failed to tell the bank about mounting losses at Merrill in late 2008. The Associated Press identified him as the best paid among the executives of the S&P 500 companies in 2007. On December 8, 2008, Thain gave up on pursuing a controversial bonus of $10 million from the compensation committee at Merrill.[2] Thain also decided to accelerate payments of bonus to employees at Merrill, giving out between $3 billion and $4 billion using money that appeared to come directly from the $15 billion Bank of America and Merrill Lynch had received from US government taxpayers (via the Troubled Assets Relief Program). Thain has additionally become infamous for spending $1.22 million in corporate funds to decorate his office, even as he was asking the government for a bailout of his troubled company.[3]

So fuck Mr Davros and his ilk. Obama's Treasury Secretary was on the New York Fed through all the mistakes too. They don't have any answers beyond the orthodox path they have followed thus far. The report. 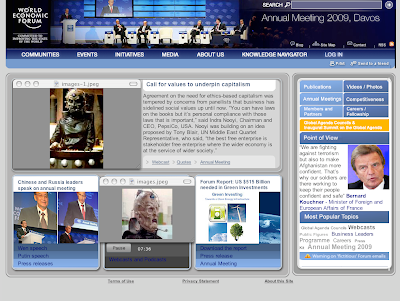 On the second day of the World Economic Forum in Davos, business and political leaders are turning their attention to financial regulation, trade and global security.
[...]
On Wednesday, the International Monetary Fund said global growth was set to fall to its slowest pace in six decades.
In a sharp downward revision of its November forecasts, the organisation said world growth was projected to fall in 2009 to "its lowest rate since World War II", reaching just 0.5 per cent.
The Chinese and Russian prime ministers also used their opening speeches at the Swiss ski resort to obliquely criticise the US for helping to precipitate the financial crisis.

Told off by the commies. The American web of crony capitalism has proven much weaker than the Eastern brands and they want it known they mean business. Wen Jiabao, the Chinese prime minister - perhaps with an eye to a nascent Yuan zone that they are trying to establish in East Asia - to that end sent a message that they are taking this forum seriously:

"Political leaders must be forward-looking. They should be responsible to the entire financial community as well as to their own countries and people".
China has sent one of its biggest-ever delegations to the forum, which some analysts interpreted as a sign of Beijing's desire to engage with the rest of the world in finding a way out of the crisis.

A battery of daleks.

Vladimir Putin, the Russian prime minister, described the international economic crisis as the "perfect storm".
He said: "There is the notion of the 'perfect storm' when the natural elements come to a point and multiply their destructive capacity. This crisis looks exactly like this perfect storm." 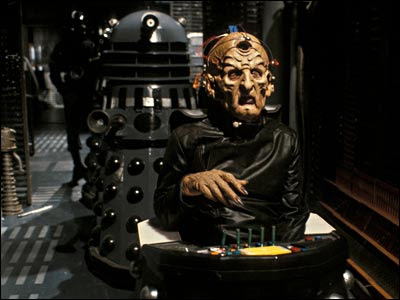 "Told off by the commies. The American web of crony capitalism has proven much weaker than the Eastern brands and they want it known they mean business."

Really? Let's see what happens when US consumer spending contracts even more and the Chinese economy goes down the toilet. Ever seen millions of jobless chinese peasants revolt Tim? Think it will be better than million of americans unable to buy plama TVs?

its all coming out now in the US... the greed, the corruption, the $18 billion bonuses, the $50 m jets, the $1.2 million renovations for offices ... and on and on , like maggots rising to the top of a barrell full of shit, the whole house of cards is falling down around their greedy ears and even while they siphon off TAXPAYERS money to pay lobbyists and buy commodes they have their grasping filthy mitts out for more.

Capitalism for the workers , welfare for the bosses

Prepare for the breakdown of civilization and life in a Mad-Max like dystopia!