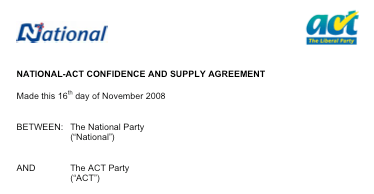 Let's examine the National-Act agreement piece by piece. The agreement sets the framework for a socially conservative legislative programme and signals many radical policy positions being developed under Act's wing during this term. Hide emerges as something of a potential player within the government to front some of National's dirty work for them. In advancing core Act items of government reduction and slashing lefty projects, Hide's membership of the Cabinet's "razor gang" will be one to watch. More troubling than axing a few paper-shufflers in Wellington is the hardened streak of the fanatical type embodied by "strict" law and order policies - adopted by Act to win the Sensible Sentencing Trust phobes and their resources. With one of their number in Rodney's caucus and the thrust of this agreement they could take "strict" to a whole new level of pain.

There is a fair bit of necessary waffle at the start (although I do like that they have a "Philosophy" section, that's a very Act thing to do) in between the concrete actionable items, which are:

"JOINT ASPIRATIONS" - Wank. A bunch of bureacrats and businessmen standing around in the locker-room trying to explain why they have a smaller penis than the other guy. Waste of money. They have advice coming out of their ears - from business, from NGOs, from the public service, from me, from everyone - select committees go to Aussie all the time, what Act wants is to pick it's team to do what all these other teams are doing and come up with the answers they want. If they are studying the Australian model they will most likely be disappointed - "successful", please, we operate a successful government compared to Australia and the answers, if any, will be left wing ones in Aussie. There would be far more value for both our countries if we charged the Australians for our advice to them. This group could give the Aussies advice about what to do if you are a country with little raw resource wealth instead of 10% of the world's minerals with only 0.3% of it's population. Besides the way it will work it's a form of needless replication isn't it, especially if the brief is "how can we be more like Australia?" I'm ultra-dubious as to it's merits despite the positives of setting exterior benchmarks.

If Act can get a group to go all over the world and advise then the Maori Party should have their group on indigenous rights do the same thing, with the same brief. That way they could criticise the Aussies too.

"INSTITUTIONS AND CONSULTATION" - This is a "Leadership Council" only for Act - to the Nats this is a Cabinet sub-committee to keep Rodney sweet. Sir Roger or that Garret nut wants this scheme or another looked at, fine here's some pocket money for it. Why they didn't put a dollar figure on it, I have no idea - special projects might be quite low, but if the right of National are on that sub-committee then they could get all manner of privatisations and restructurings scoped out using this method with Act as their proxies. They could always paint it as an Act balloon not their own.

This is underlies the relationship, and perhaps should be nearer the top because of its importance. The document goes into specific types of things that they should be given advance warnings of and briefings on, but its all about being aware of the sensitive issues (that conflict with Act policy) and having open access to National's Ministers and their officials. Given that regular Hide-Key meetings will occur any stepping on toes would not be expected: "Formal consultation will be managed between the Prime Minister’s Office and the Office of the Leader of ACT." Informally through whom?

Notice the agreement starts with "The Leader of Act Rodney Hide" - because these are personal appointments and Rodney wants it clear to the Nats that he is the leader. By implication it also means that if Rodney is rolled in caucus (although this is quite unthinkable) then the deal is back on the table. On the other side John Key isn't named as the PM. Rodney will work with any Nat PM, but the Nats have just signed something saying they will deal with Act only with Hide as leader. It also means that the Nats can roll Key and not break the deal, but this is a form of insurance should Sir Roger try to roll Hide (again unthinkable).

Local Government is usually a portfolio fobbed off to some flunky not worthy of Cabinet, but no-one has wanted to reform it (since 1989) and Hide would dearly love to reward some of his property developing and owning backers through reducing their council costs and finding ways of capping rates and the spending increases in the sector. Some sort of reform is needed based on their performance to date. Regulatory reform and cutting red tape will be some mission. As a "perk-busting" hang-over he could get a lot of easy and positive publicity out of this role. The other cabinet committee he's on (apart from the "Leadership Council") will be the razor gang, and I have no doubt that Hide's razor will be sharper and nastier than everyone else's. As Associate Commerce he will back Roy up in her Consumer Affairs position on broad policy/branding issues. I don't expect Roy to do any cutting of the military as Associate Defence - quite the opposite seeing as how she went Private Benjamin for a spell last term with the NZ Army - and in the junior education slot she could do quite a lot, but there is no detail fleshing this out.

POLICY:
1. Law & Order: Sentencing, bail and parole will get "stricter" - that's it: Stricter. Not better, not more just, not flexible, not fairer, but "stricter". Whether this involves the abolition of the recently formed and much needed sentencing council there is no equivocal indication. Could be nasty. Three strikes bill supported to select committee stage - the Nats are obviously not that keen on it because they then have to "give the ACT bill a fair hearing in the committee based on the evidence and give due weight to the submissions received." - which implies they are already dead set against it and have to acknowledge their prejudice. Mandatory sentencing is dangerous, but if it only applies to the top dozen or so of the most horrendously violent multiple re-offenders then I could see National having no problem passing that - it would also be very popular.

2. Climate Change: National agrees to a review by a special select committee of Parliament of the current Emissions Trading Scheme legislation and any amendments or alternatives to it, including carbon taxes, in the light of current economic circumstances and steps now being undertaken by similar nations. - this is what National would have done anyway.
And National will delay ETS implementation immediately, which they would have anyway.

3. Controlling Government Expenditure: the ACT Leader Rodney Hide as a member of the Cabinet Expenditure Control Committee process. A focus of this work should be on elimination programmes that do not deliver value for money. As a member of the Expenditure Control Committee, ACT shall be entitled to the support of one Treasury official in its office to assist with this role.
- The razor gang. And the razor gang's tools:
Establishing a series of Task Forces that include private sector representatives and private sector chairs to undertake fundamental reviews of all base government spending.
And the instrument to lock it all in:
Support, within six months, the referral of ACT’s Taxpayer Rights Bill to the Finance and Expenditure Committee of Parliament as a government measure with the aim of passing into law a cap on the growth of core Crown expenses.- this is ambiguous, it is a "government measure" but is only going to be supported by National to a select committee. Where they might change it so much that even Rodney will vote against it? I can't see a big spending Tory government binding their own hands voluntarily - this won't happen.

4. Tax : Should be lower and flatter, but no firm commitment to anything.

5. Regulation : Set up a task force and:
explore the concept of a New Zealand Productivity Commission associated with the Productivity Commission in Australia in order to support the goals of higher productivity growth and improvements in the quality of regulation.
Introduce a pet bureaucracy. That's what Cullen gave the Greens each time, but Hide only gets an exploration of the concept itself. A bureaucracy to critique the other bureaucracies and tell business how to be better. What patronising bullshit. If the Greens had suggested it Act would be mocking it all the way back to Australia.

7. Education : "National and ACT have agree [sic] to set up an inter-party working group" - this has to be the lowest order of commitment - to do nothing. It's "agreed", not "agree" in that context - it's about education, you think they would have got that bit right.

This is important, it says that Act will support National's manifesto, ie. their public legislative programme released during the campaign. The Maori Party aren't going to give the Nats this. To be fair a great deal of the Nats policies are very close fits to Act's counterparts, ie. conservative/right.

This is the major constitutional development since MMP, and in the last Labour administration's especially - the idea that "collective responsibility" (public support of executive government decisions) does not have to apply to the junior coalition partners in areas outside of their immediate ministerial portfolio responsibilities. The so-called "agree-to-disagree" concept, which is as much a pillar of the modern rules of government as the "good faith/no surprises" courtesy. And they say that in this clause by what they don't say: that Act can disagree on everything else. And the next clause spells it out clearly:

48 hours notice must be given by National to Act or they don't have to support procedural motions (the things that make parliament work and advance the government's agenda or tactics). But all the Nat's get on their side of the deal is a rather watery "unless Act has previously advised" which could be 48 seconds!

And to save the Governor-General having to read all of the document that proves that John Key has the backing of Act and their numbers to be PM as the leader of the National Party, right at the end they give him the information he needs immediately above the signatures. Under our current system MPs don't have to be sworn in first - the G-G can make anyone who stood at the election a Minister (until the results are declared officially, and if they failed to get in they would automatically terminate), but they have to be sure through public statements and publicly released documents, such as this agreement, that they appoint the party leader who has the backing of the majority of the House to be PM - then the PM advises the G-G to sign up the other ministers. When Rudd, in Australia, was sworn in as PM he made the unusual move of signing the Kyoto protocol before the rest of the cabinet was sworn in (as an ego/political stunt). Such unilateral and personal executive action would probably breach our Cabinet Manual.

Now I would like to see a te reo version and an English version of the Maori Party's agreement. They won't be giving the Nats a backing on their whole agenda (not that they need it with Act backing all of the manifesto) so they cannot expect to get as much as Act has. I await that document with nervous anticipation. If this is Actional, what will the Maori Party inject to make it Mactional?

[Hat tip to David Farrar for the document source url.]