Don't let them burn it down 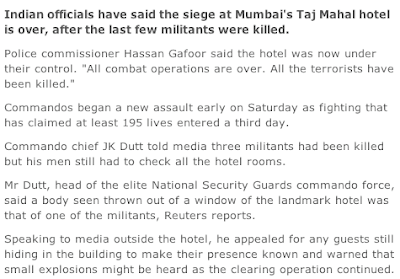 [UPDATE: 4:50PM: The fire looks to be under control and people are milling about as if it is over. The authorities are tentatively saying that the last of the terrorists have been neutralised. Let's hope so - given the small numbers of them and that there were no negotiations to speak of it has taken a long time and lot of destruction to get to this point. There is still no solid news on how many civilians are left at the Taj and in what shape they are in. One report (from the other hotel) from a commando said there was blood all over the place and bodies everywhere. The room-to-room searches are now underway.]

[UPDATE: 3:23PM NZDT Live pictures of the Taj Hotel shows a small fire from ten minutes ago has spread across and is now also on the floor above. I said in the post early this morning that that is the game plan. But the Indian security forces are so useless it would not surprise me if they started it themselves somehow.

The fire brigade have driven up close and are now spraying water in there. At this point the rest of the world is wondering why they didn't use the fire trucks to storm that area in the first place. That area (according to one report) was cleared by the military before. Just utterly hopeless.]

[UPDATE 3:11PM 29/11/2008:
Here we go again! Live pictures now. There's a fire now on the ground floor of the Taj - and gunfire from within. The Indian security forces are pathetic and as chaotic and disorganised as India as a whole. No information is forthcoming from the authorities. They are hopeless. Don't let them burn it down FFS.]

There are shots or grenade blasts from the Taj Mahal Palace & Tower in Mumbai as the terrorists continue to resist assaults from the military. But as I said in a previous post, this is India, so who knows how this will unfold. There's no information, and little intelligence from the authorities. Just don't let them burn the bloody building down - that's where this is going if they don't do this right. Chaotic. They seemed so disorganised, thronging together to get in each others way. Take them out FFS.

This guy was walking around in there yesterday: the TV guy was able to file his report from the bottom of the hotel. He notes the metal detectors on at the entrance - so I guess security was normally tight. 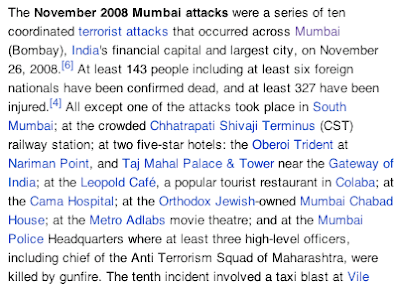 As I suspected. My disbelief in the earlier post was well founded. The policemen, Wikipedia says, were assassinated and the stories about them dying in gun battles elsewhere seem to be false (police spin?) - which is what seemed more likely. You have to wonder at the police and military's communications capability and priorities. Are they any worse than their intelligence and combat performance?