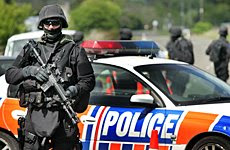 Urewera raids: Accused face fresh charges
Fresh charges are to be laid against some of those seized in the Urewera police raids - more than a year after they were arrested. Five of the 18 people arrested during the nationwide operation last October are to face new allegations of participating in a criminal gang. One of the five is Maori activist Tame Iti. The charge carries a maximum penalty of five years in prison and has angered supporters of the accused, who claim the Government is trying to save face after failing in an attempt to bring charges under the Terrorism Suppression Act. Seventeen of the 18 defendants charged with firearms offences were committed to trial last month. They were alleged to have participated in weapons-training camps at various locations around the country.

Seeing as the Police failed horribly under the TSA one gets the feeling that this is a grudge match now, while I certainly believe there should have been an investigation into activists running around and playing with guns, the manner of that investigation in land as steeped in righteous grievance as Tuhoe and the powers that were used to gather that evidence went well beyond the threat.

Actually, the reasons the police are doing it is because these people were up to no good, and were involved with serious criminal intent. The act they had to follow was the TSA, and they were left high and dry when the politicians stuffed up.

Tame Iti. One of the better looking, higher educated and more sophisticated Maori/NZ'ers, gives you some idea what the rest of them are like - eh bro ...

He is a great ad for NZ around the world and he is not the worst so if are not there don't go, unless your idea of art and culture is graffiti that is.

Most people would be embarrassed by a thing like him but over there they love him, as well as being welcome in all the best criminal areas he is big on the cocktail party circuit.

I saw on 20/20 last night a bunch of guys wearing army fatigues and training with weapons in the bush. They labelled themselves as 'survivalists'!! I wonder why they haven't been arrested as suspected terrorists, since they looked and behaved like the supposed terrorists in Ruatoki - oh no, I'm mistaken, they didn't really look the same - they were dressed the same, but they had white faces!

I saw on 20/20 last night a bunch of guys wearing army fatigues and training with weapons in the bush. They labelled themselves as 'survivalists'!! I wonder why they haven't been arrested as suspected terrorists, since they looked and behaved like the supposed terrorists in Ruatoki - oh no, I'm mistaken, they didn't really look the same - they were dressed the same, but they had white faces!

I know watching TV can be challenging if you are really stupid, perhaps you get mum to watch it with you and she can explain the tricky bits for you.

All the people arrested were scumbag losers. Make you wonder why bomber whinges about them instead of focusing on the more serious court cases such as the Nia Glassie one.

At the risk of feeding the trolls, I have to ask why some people think they are safely living in a liberal democracy, when the police can randomly raid people's homes, lock down and terrorize and entire community, arrest and hold people indefinitely, all with *no evidence* other than a bag of avocados, some dirty laundry, a couple of hunting rifles, and a bunch of out-of-context quotes? It doesn't matter whether you agree with the political views of the Tūhoe activists or the anarchists. This is about basic principles like innocent until proven guilty, freedom from unreasonable search and seizure, due process.

If the cops had terrorized some poor, white neighbourhood in Christchurch to arrest the neo-nazi's who regularly go bush in mismatched camo gear for weapons training, with a similar lack of evidence except for their idiotic, violent political views, I would be critizing the cops for that too. It would stick in my craw to do it, but I would do it, because this about basic civil rights like freedoms of opinion and speech, personal liberty, freedom of association. If we don't defend these rights and principles, we risk ending up like the UK where the government is currently building a database to permanently store all citizens' emails, text, personal data etc, or China, where people are disappeared and murdered for daring to criticize the government.

I disagree with what most of the posters here say, but I would defend to the death their right to say it. Can they not extend the same courtesy to Tūhoe and the anarchists, if only for the sake of keeping our tentative grip on liberal civilization?

They were actually. One of them said he would kill some MPs if the apocalypse came or something... They were mentals.

All who defends the police action are all trolls? I suppose we are racists as well?

You're getting the hang of tumeke very fast.

Bomber claims he's not anti police but really when was the last time he wrote a post praising the police.

If the police bugged the vehicles and private rooms of any neo-Nazi outfit they would hear the same sort of stuff that the Urewera "terrorists" said. Do these people go off into the bush to play survivalist too? Yes - they even had a TV film crew interviewing them (though they did not identify themselves as neo-Nazis to be fair - this was a few months ago).

After the TV cameras have gone they can talk shit about revolution, assassinations, post-apocolyptic scenarios, sieges, coups, putsches, bombing and mayhem to their hearts delight. If the police chose to go after them I'm sure they would find ample examples of all the sorts of stuff they got from the Urewera group. And it would all be thrown out of court too, because it's just talking shit. It's empty talk about "what if's" and fantasy projection.

The evidence is the planning and preparation and the oath to commit an offence (the legal hurdle). The police found zip on all fronts.