What a shocking morning it was: 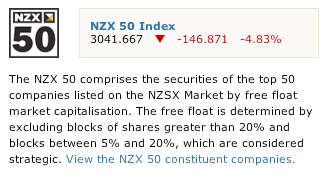 That was last morning. The representatives of the US taxpayers are not rolling over like the White House and Wall Street thought they would. And yesterday morning we saw the market reaction. Without urgent government money the US banking system will implode, or rather cease up. Well, the money supply is about to contract to where it should have been had the Administration not encouraged massive private and public debt - and no-one seems to know exactly where that point might be right now. The British and now some European banks are feeling the fallout and the results of the American write-downs and the results of having creating their own credit bubbles on the back of historically over-valued residential property.

The size of the monetary contraction - the wholesale write-down in value of the securities - must be linked to the size of the aggregate contraction in house valuations. And if no one is lending that will depress the market and make the assets relatively more illiquid to boot. That is my understanding of the underlying situation. The overlying situation is a lack of confidence in sticking your money with someone who will lend it out. This fucks up the economy. And the confidence in the future is not there because we lack information about how much of this debt is being carried - and by whom. I suspect that some mergers occuring recently may have been methods of disguising both firms' bad books - it buys them some breathing space, it means they can reward each other with bonuses for a successful merger, and they have a better argument that they are a salvageable pillar like AIG, rather than an expendable side-show like Lehman Bros. when it comes to the Treasury Secretary's cheque book - and I'm talking about the UK here too.

In this panicked situation of fear people are even buying our indebted, stricken dollar - perhaps on the assumption that because the Australians own our banking sector the bloated Australian Federal Treasury has underwritten them, and so we are receiving a bit of immunity by proxy. Probably.

OK, just seen Bush on TV in a stand-up saying everything's cool, it's all OK and there is no need to panic, Mr Mannering. What was that line from Pulp Fiction: Everything is mother-fucking far from OK.

I missed the very start, but he didn't sound as though he was saying anything of substance, nor indeed did he show signs of intelligence or comprehension - Cheney perhaps having fed him the valium laced bananas this morning. The idiot on Fox couldn't explain what Bush had said. I heard him say that the assets - the mortgages - that the federal government would buy off the distressed finance sector would be worth maybe much much more in value later on - maybe the taxpayer would see some upturn. The obvious question was: if it's worth so fucking much why is the price the market putting on them so little?

Congress isn't sitting today because it is a Jewish holiday - that's what Bush said, and he was being serious.

Anyway the New York stock exchange has opened up into positive this morning at the start of trade.

A THOUGHT: If China decided to revalue the Yuan against the US dollar - where it has been in an artificially low band - that would have the maximum effect right now. If China announced that over the last few months Chinese government players had sold down most of their US dollar securities and had bought, say Euro - this right on the back of announcing a big revaluation upward - would just punish the US. They would be left with their Mickey Mouse money, locked into buying now expensive Chinese products, and left with the necessity of reining in military spending (and thus reducing their global power) or they will go broke. Just a White Paper for the Governor of the People's Bank of China; that's all it is at this stage.