Who will rid me of this troublesome Foreign Affairs Minister? 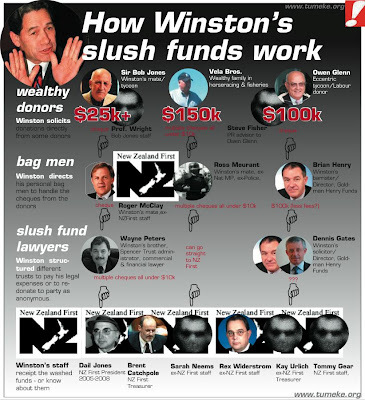 Peters hanging on by a thread
Prime Minister Helen Clark faces mounting pressure to head to the polls early as Foreign Affairs Minister Winston Peters' political survival hangs by a thread. Miss Clark resisted calls yesterday to sack Mr Peters after seeking his word during a phone conversation that he had not misled her, after claims emerged that he solicited a $100,000 donation from billionaire Owen Glenn. But her hand could yet be forced by further revelations from Mr Glenn, who seems likely to be asked by Parliament's privileges committee to give further evidence next week, after Mr Peters made it clear that it came down to his word against Mr Glenn's. The last hurdle to an earlier election fell yesterday, when NZ First pledged its support for the Government's emissions trading scheme, meaning the legislation could be passed as early as next week. Miss Clark appeared determined to stand by Mr Peters yesterday, saying she would await the outcome of the privileges hearing before making her next move. But she looked increasingly isolated last night after National leader John Key cut Mr Peters loose and all but ruled out the NZ First leader from any future National cabinet. Mr Key said he would demand more credible answers than those given by Mr Peters so far, and questioned his integrity. He said Miss Clark should stand Mr Peters down. Mr Peters dismissed the threat as an empty one and said Mr Key had given himself "wriggle room". But Mr Key said Mr Glenn had "absolutely no motivation to lie". National's move followed an explosive written statement to the committee yesterday, in which Mr Glenn challenged accounts by Mr Peters and his lawyer, Brian Henry, of how his $100,000 donation came about. He said he was approached by Mr Peters personally in Sydney and agreed to help "in the belief that this step would also assist the Labour Party in its relationship with Mr Peters". "Mr Peters subsequently met me socially at the Karaka yearling sales, I believe in early 2006. He thanked me for my assistance." The privileges committee has been inquiring into what Mr Peters knew about the donation, after the NZ First leader repeatedly denied any knowledge of the money being paid into his legal fund till July 18, nearly three years later, after being informed of it by Mr Henry. In a rare move, the committee met behind closed doors and agreed to publish Mr Glenn's statement after he requested that it not be treated as secret. Mr Henry told the privileges committee last week that he made the request to Mr Glenn for money in a telephone call. But Mr Glenn's statement said he did not know Mr Henry and did not recall having any discussion or communication with him "other than to receive remittance details".

I just can’t see Peters surviving this, all he’s got is ‘trust me, not Owen Glenn’, well why would Owen Glenn lie, he has clearly contradicted Winston and Winston’s lawyer, Mr Henry. If Helen holds on till next week when he votes for the ETS and then dumps him it makes the principled stand against Peters corruption null and void, but inaction makes her look like she’s holding on while the criticism would mount to crescendo levels, then again she doesn’t want to look panicked as well. Key’s move to rule Winston out is genius, he is showing real political nous and it’s now up to Helen to be able to steer her out of this. Winston has signed his own execution warrant, how Helen deals with that will determine her own survival.

I think I posted something similar yesterday about Clark having to chose between the ETS and strong leadership.

Understand, this decision must be made this week. If he is still in the job come Monday, she has chosen the ETS. I think that would rule out an Early election. She needs this to be as far away from voters memories as possible. So she passes the ETS, looks weak, but then hits the campaign trail hard (probably) until November 8. She hits national on secret agenda etc, National hits her on being tied to Peters and his corruption - and its gloves off.

Or she sacks him today. Keys brave call yesterday (and to quote my wife "oh, I didn't know he had balls") has actually made it easier for Clark to sack him. Where would Winston go? His fortunes are linked to Labours - they are now joined at the hip. He can't rock the boat too much, because he now has less leverage over Clark because she knows he can't go anywhere. So she sacks him, looks decisive, he probably wont vote for the ETS, she calls an election and is actually able to shape the debate a little more - make it about the ETS rather than her link to Winston.

I disagree with you that sacking Peters would look paniced. It would look decisive.

What do I think she will do? My gut tells me that she will hold on, pass the ETS and then go to the polls. The problem with making the ETS an election issue is that those middle voters will look at the cost to them - and it would be easy to campaign against Labour by saying that "this is going to cost each one of you $ABC per week". Middle voters in a credit crunch wont like it.

So I am still predicting a November 8 election, and the ETS to pass next week (which was Labour's key goal for the year)

There is no doubt in my mind that Helen new the truth about the Owen Glen donation to Winston and has known about it since it was made.

Glenn made that donation because he wanted to give Labour support and would not have made it without checking with the Labour Party first (and getting their assurances that the 'gong' would duely be awarded and that the honorary Consulate would follow).

A non-philanthropic billionaire like Glenn makes decisions to donate money only if there is personal gain. Now that the 'promises' from Labour will not achieve what he wanted, he has absolutely no reason at all to keep stumm about their dirty dishonest dealings.

I would love to be a fly on the wall in his barristers chambers. And surely we can expect some more revelations from him.

Finally Key is showing he has some balls.

I know of a few people who said they weren't interested in a National government that would potential be held to ransom by Peters, these people are swing voters who are more likely to vote National.

Anecdotal but it will be interesting to see if this has a positive effect for the Nats in the polls.

You can argue untill you are blue in the face that MMP is the best way of electing our government but Winston is undoing anything positive that may have come out of it.

Bingo - Clark admits to knowing about the donation!

Well thats kiwiblog for you, Winston was around for 11 years under FPP before MMP, but magically it's MMPs fault which is why we need to change back to a system where the elites can win like they used to!

Well thats kiwiblog for you,

Maybe you are new to this interweb business, you clearly don't know who Dim is.

Winston was around for 11 years under FPP before MMP,

You were probably still in nappys during those 11 years when winston around pre MMP, but he didn't hold the balance of power then like he does now. The reason he holds the balance of power, the reason Helen clarke is making a prize tit of herself in standing up for winston peteres is MMP, no other reason.