Anything National can do Labour can do better? 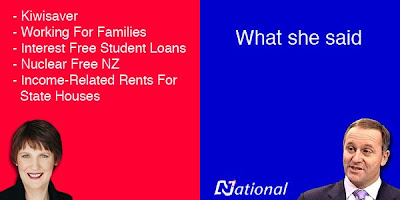 Toll looks likely on Waterview link
A toll looks likely to be slapped on drivers who use the new $1.9 billion Waterview connection, regardless of which party leads the Government that makes the final decision. The Waterview connection is set to be completed by 2015 as the country's first big public-private partnership roading project. The Labour-led Government will make a final call on whether a toll will be charged on the major new route in late October or early November - but Finance Minister Michael Cullen yesterday openly talked of the potential for a $2 fee. Asked how much the toll would be, Dr Cullen said, "Oh, quite small." He then referred to Prime Minister Helen Clark and Transport Minister Annette King having talked about a $2 toll as being an acceptable amount. "We've said things need to be kept at an affordable level, and you need to have alternative routes," Dr Cullen said.

Yesterday Labour were crucifying National for suggesting Tolls, today Labour are quietly admitting they may have one of their own! Outrageous, now while their version is toll lite (the amount is low and there are alternative routes that are free) compared to National’s full strength tolls (high tolls and NO alternative free routes) the differences are still both focused on tolls and NOT public transport focused. Why we are committing billions of dollars for roads when an Australian Scientific body predicted that petrol would be $10 liter within a decade, meaning most NZers wouldn’t be able to drive on these roads anyway. It’s short sighted bullshit once again from both sides of the house.

I have asked half a dozen times. Please tell me how you would design a system that would work in auckland, a geographically sparse low density city, with mutiple work centres.

Nobody has been able to do it, except for 'integrated ticketing'. Can you describe it please?

I actually found myself agreeing with Helen Clark yesteray - human kind will come up with an alternative to petrol based cars, if peak oil is a reality. Private transport is not dead. We cant all catch public transport.

fuck your dumb, go read some Clive Matthew-Wilson to put a hole in your love of National and their transport system or read www.getmoving.org.nz

“National is riding into the election on a series of vague promises and denials. For example, their transport spokesman said on Sunday that some motorists could be paying $50 a week for road tolls after the election. Then National retracted that statement, saying the real tolls would be much lower. Either National hasn’t done its maths, or it’s hiding something from the voters. Taxpayers have a right to know what the real-world costs of these public-private partnerships will be.”

The Dog & Lemon Guide has posed a number of yet-unanswered questions to the National Party.

1) In 2006, Treasury concluded that funding roads by tolls was less efficient than simply building them from taxes. What is National’s response to this?

2) One of National’s advisors is former party leader Jim McLay, who is executive chairman of Macquarie New Zealand, a branch of a major Australian builder of toll roads. Because of the clear conflict of interest in such an arrangement, can National categorically promise that it will not sign a contract with Macquarie or its subsidiary companies?

3) Many toll road projects in Australia have been an economic disaster. For example, the Brisbane’s newest toll road, EastLink, is currently running at 28% below projections and Sydney’s Cross City Tunnel project went bankrupt.

Can National categorically promise that it will not sign a deal whereby the government has to compensate the private road builders if the road builders make less money than they expected?

4) Metronet, a public-private partnership responsible for maintaining and upgrading two-thirds of London’s underground network, went bankrupt, leaving the taxpayer to bail out the project to the tune of billions of pounds.

Can National categorically promise that it will not sign a deal whereby the government has to pay out any part of the road building costs in the event that the project goes bankrupt?

5) National’s transport spokesman Maurice Williamson has stated publicly that National will repeal the ‘Greens amendment’ that requires that whenever a toll road is built, the public must always have an alternative route available for free.

Can National categorically promise that it will not sign a deal whereby existing roads are closed down or restricted in order to force motorists to use a nearby toll road?

6) Will National legislate to control the tolls on private roads, or will the private road operator be free to charge whatever the market will stand?

7) Faced with high fuel bills, many motorists are now looking to take public transport to work.

Can National categorically promise that it will not sign a deal whereby public transport is effectively excluded or restricted from competing with a toll road?

Is that good enough for you yet sdm or do you still hate public transport?

I think you meant fuck you ARE dumb, but whatever.

Ill deal with your points

1) National should realise their policy detail well before the election

3) Investment is a risk - I dont want the government to bail anyone out.

4) When you say underground, dont you mean trains?

6) Make it too expensive and people wont use it.

7) We need both. For my company it cant be used - but freeing and speeding up transport is important, both private and public. My point was, a 100% focus on public transport will not work.

I dont hate public transport at all - caught it for many years. What I hate is alarmism, is ideology trumping pragmatism, this bullshit that private transport is over, etc etc etc.

So....I'm assuming all those Nonnys from the Maurice thread will be on here today give Labour one up the arse for supporting tolls?

And anon above - why can't you get it through your head - PUBLIC TRANSPORT won't be efficient in a city like Auckland. Yes, yes I know it should be subsidised to get cars off the road - but really that's just an argument to get people to pay more to get less.

Wait....I bet you support the ETS too huh?

Big surprise coming for you nonny once this completely stupid bill is passed.

As soon as people realise the actual cost of this bill people like you will be getting stoned in the streets (not that kinda stoned stupid).

Meanwhile- Jobs go as manufacturers can't compete, prices go up further as business are hit with all the new taxes from this scheme, farms become uneconomic through new taxes - can you see where all this is going Nonny?

Or do you just want public transport whatever the cost?

note that while legio and SDM are backpeddling they don't mention the better transport website or the very excellent article by Clive - please explain why your national mates have done this...

One of National’s advisors is former party leader Jim McLay, who is executive chairman of Macquarie New Zealand, a branch of a major Australian builder of toll roads. Because of the clear conflict of interest in such an arrangement, can National categorically promise that it will not sign a contract with Macquarie or its subsidiary companies?

I'd love to hear the apologist response from SDM

"One of National’s advisors is former party leader Jim McLay, who is executive chairman of Macquarie New Zealand, a branch of a major Australian builder of toll roads. Because of the clear conflict of interest in such an arrangement, can National categorically promise that it will not sign a contract with Macquarie or its subsidiary companies?"

There should be a transparent tender procress and the best company get the contract.

So lol, about these tolls Labour has in store for us.
Is PPP's ok for Labour, but not for National?

PUBLIC TRANSPORT won't be efficient in a city like Auckland

How can you make a claim like that when a serious feasibility study hasn't even been done!

An well integrated light rail/ferry/bus network could be plenty efficient in Auckland.

There should be a transparent tender procress and the best company get the contract.
That's your denunciation of what National are trying to do? Wow your hate of Labour gives you a very blinkered view of National doesn't it?

Public transport wouldn't work for everybody anywhere, especially in Wellington with our skinny roads and steep hills. No thought seems to have been given for families where both parents are working, they have young children to get to and from school, childcare, whatever. Buses and trains are just not practical in those cases.

I am not a national party supporter or member. I am not their spokesman.

Again I await the design of any public transport system, rather than ideologically following a line blindly

Anonymous said...
So lol, about these tolls Labour has in store for us.
Is PPP's ok for Labour, but not for National?

Actually Labour voted for PPP's for infrastructure and National did not. Get you facts right.

Me thinks LOL is suffering from reality distortion.

You can't make this stuff up.

What's so unfeasible about a public transport system in Auckland? I used to catch a train from Mt. albert to hendo every day, and knew people who would ride it to Onehunga from town.

Chatting to people on the train, they thought it was great since it's cheaper than petrol, their main complaint being that there are not enough trains, nor are they reliable enough (IE on time, mainly because they are using big old diesel rigs that fuck up all the time)

With some more money put into the system to electrify it and bring it truly into the 21st century, it would be choice!

rangi - its ok if you live AND work close to the train line. If I was travelling from Mt Albert to henderson I would catch the train to.

Unfortunately, not everyone works or lives near the services. We are a geographically sparse city, which makes designing and implementing a public transport system difficult

Actually Labour voted for PPP's for infrastructure and National did not. Get you facts right.

Heh. Now where were you yesterday oscar.

i lived in pt chev, it was a walk to get there. there aren't many places in Auckland where you can't get a bus either - why people are keen about integrated ticketing.

From my experience living in Nagoya,JP what is always helpful is that trains in particular have a pretty advanced ticketing system (you spend a $20 deposit to get a card with a chip in it that takes your fare wirelessly), and are on time.

The bus and train systems, although seperately owned (train by several private companies and bus by Nagoya city) are well-integrated eg you can catch a bus straight from your train station to go to areas that aren't served by trains

i still ride my bike tho
HAHA

Good on you for riding your bike but.

I've gone one better and work from home. Drive maybe one day a week if that.

I don't doubt that Public Transport has its place. Wellington City is perfect for it.

The problem is 'fanatics' that hold it up as The Saviour when it clearly is not.

I'd rather that the Government subsidised Segways than trains.